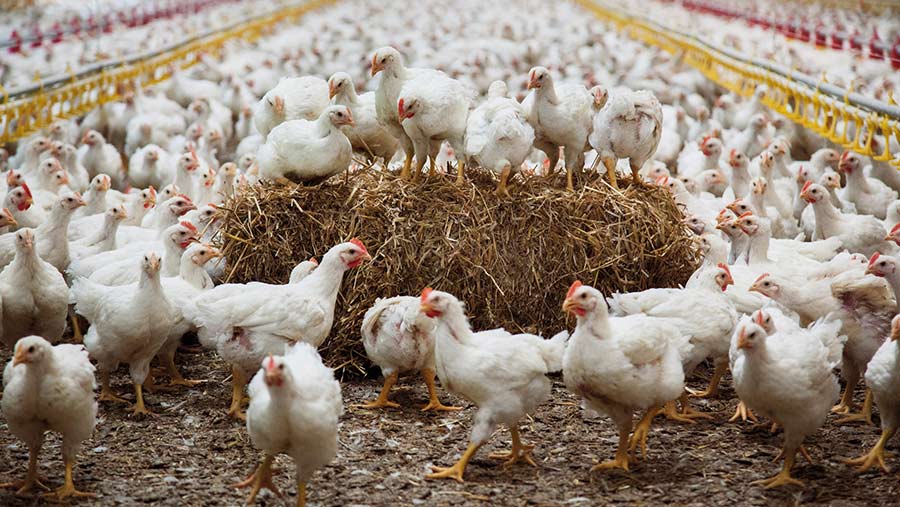 For decades the poultry industry has striven to improve efficiencies, driven by consumer demand for lower prices.

Fast-growing chickens with high feed intakes have been required – but that is starting to change.

Slower-grown breeds currently comprise about 5% of the UK market, whereas in the Netherlands they account for 100% of the retail market.

While experts do not expect uptake in the UK to match the Dutch level, slower grown birds could make up 10-20% of the market within the next five years.

What are the difficulties?

According to Danny Johnson, commercial director at feed and nutrition expert ABN, consumers are increasingly focusing on higher welfare, slower growing birds, and retailers will push suppliers to meet those demands.

But questions remain over whether shoppers will want to pay higher prices and whether the sector can resource longer, more extensive production cycles effectively.

“For example, if we need to produce the same number of birds at lower stocking rates, that will take more land,” Mr Johnson says.

“But it’s difficult to get planning permission, particularly close to processing sites – which is important given the current Defra consultation over travelling times.”

There are also conflicting demands in terms of sustainability, changing welfare requirements, and net-zero aspirations.

Transitioning to a slower grown system

To meet the demands will require a joined-up and well-resourced approach throughout the supply chain – and a higher price at the end of it, he adds.

“We need to strike a balance in terms of setting targets and what the industry can realistically achieve,” he says. “We really need clarity from retailers and consumers over their priorities.”

Patrick Nicholls, technical sales manager at Hubbard, says producing outdoor-reared or extensively stocked chicken is not as simple as it sounds.

The answer, he says, lies in the genetics of the bird, combined with the feed it is given.

When selecting the right breed, a producer must first look at what they are trying to produce, he says.

Do they want a 2.5kg bird at 49 or 56 days, or a 2kg bird at 70 days? Is it for indoor, free-range or organic production, and is there a feather colour requirement?

In the UK, the two main Hubbard crosses for slower growing characteristics are JA787 and JA757. These are grown on free-range or organic farms and in enriched-environment indoor systems.

When it comes to management, the first few days are much the same as for conventional broilers, although they do need some more attention. 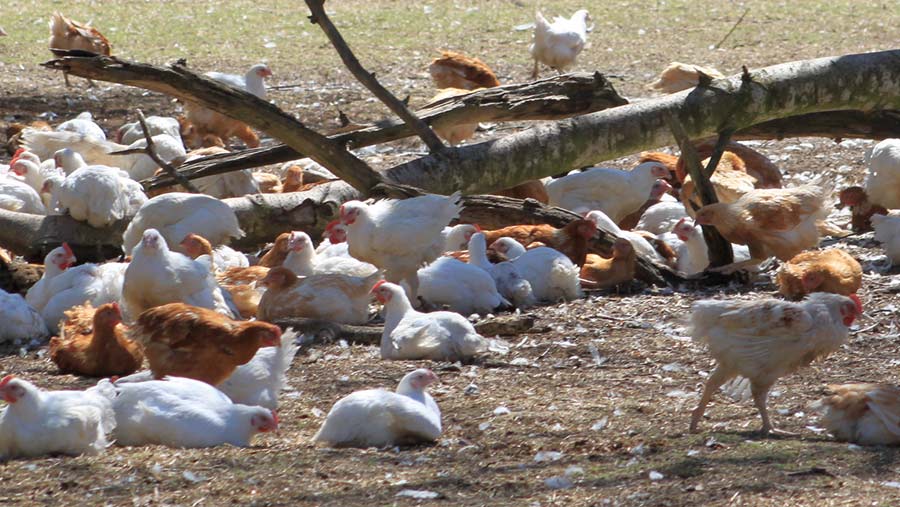 After that it is down to tailoring diets and management to the specific requirements of the breed and the production system.

Generally, the birds will be easier to manage, particularly if stocking rates are reduced, Mr Nicholls says.

Health is normally better in slower-growing systems; gut health also tends to be stronger, litter quality is significantly better, and liveability is excellent. The birds are more active and range more than conventional broilers.

“I’ve also been told that the farmers themselves experience better job satisfaction with slower growing breeds,” he says.

Charles Bourns and his son James rear 38,000 slower-grown chickens in their all-in, all-out system at Northcotts Poultry near Gloucester.

“We went from conventional broilers to JA787s and found that they love routine,” says Charles.

“So if you always wear blue in the shed, never change it. That’s the biggest problem we’ve had with them; they’re very flighty.”

Possibly because of this need for routine, about half of the entire flock mortality occurs within the first week – but once they have settled, overall mortality is very low.

That could be due to the slower growth, which means they are under less pressure and tend not to get knocked back by problems in the same way that conventional birds do.

After three crops, the farm has not had to use any antibiotics, and hasn’t required a vet for six months.

Lower stocking rates and reduced water consumption mean the litter is better, as are rates of pododermatitis and hock burn.

The farm takes delivery of day-old chicks and treats them much the same as conventional birds, with feed on paper and the shed heated to the usual temperature.

But maintaining the temperature requires more energy use.

“We need to use more gas to heat the sheds due to the lower stocking rates,” Mr Bourns says.

“That obviously affects our Climate Change Levy and carbon footprint.”

Instead, the farm is now looking at half-house brooding where half the shed is heated in the initial phase after restocking, to cut bills and carbon output.

The birds are 50% corn-fed via pan feeders and although Mr Bourns likes to offer feed ad-lib, sometimes he has to restrict it to avoid wastage.

“The birds are hooligans and sometimes decide to deliberately spill it all over the floor,” he says. “While I liken a broiler to a couch potato, these are the complete opposite.”

Rearing the birds for Hook 2 Sisters on a Freedom Food contract, Mr Bourns provides string and bales of straw as house enrichments, as well as the required perches and windows for natural light.

“They are really lively and will pull the straw bales apart,” he says. “Unlike broilers, they use the perches until the day they leave.”

The growing period is 10 days longer than normal, meaning Mr Bourns produces one fewer crop each year than on a conventional system.

“You can’t push them with management and obviously the feed conversion ratio and weight-for-age are worse. But we are paid a premium price so financially they’re profitable,” he says.

“The main concern is whether the consumer is prepared to pay the extra price to make it viable in the long-term.”

Olivia Cooper was reporting from the Pig & Poultry Fair Online forums (12 May 2021).