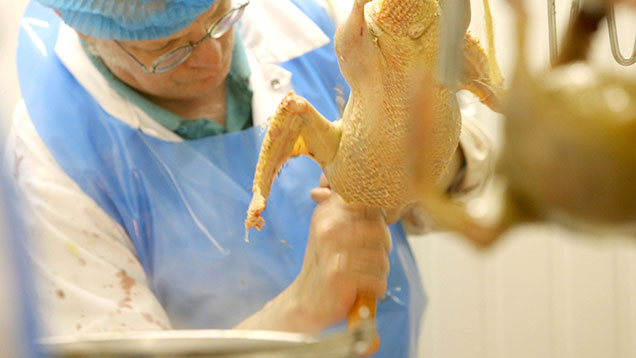 Carcass rejections linked to E coli are on the increase, with the industry’s voluntary ban on certain classes of antibiotics believed to be a contributing factor.

This is a particular concern, according to poultry vet Richard Jackson of the St David’s Poultry Team, who points out that on some farms, the figures will be higher.

Inevitably, sending compromised carcasses to the slaughterhouse will cost the farmer dear. “Every bird taken off the production line means lost FCR and is money thrown away,” he says.

“There is also a risk that birds infected with E coli will also be shedding the bacteria, leading to potential spread to other birds in the flock.”

Even though the bacteria is associated with many different inflammatory conditions in poultry – including peritonitis, pericarditis, perihepatitis, cellulitis and airsacculitis – most are indicated by the presence of pus.

Pericarditis, for example, is characterised by pus around the heart, while cellulitis involves a build-up of pus under the skin.

“Cellulitis is almost impossible to detect in live chickens on the farm,” says Mr Jackson. “It can only be seen when the birds are plucked and it may come as a shock to the farmer when the factory tells him that his birds have it.”

Another problem is that meat inspectors have many categories to choose from when it comes to rejecting carcasses for E coli-related infections.

“It is often the case that if a bird has one E coli condition, it may have several others. So what is the meat inspector going to reject it for? When you are analysing your data, it is really important to look at the E coli-related reject figures as a whole, and bear in mind that meat inspectors do vary and these conditions should be viewed as an entire group.

“I would also encourage farm managers who have had issues with E coli to go in there and do a few postmortem examinations themselves, to ensure they are culling correctly. We don’t want to cull uninfected birds, but at the same time we don’t want to leave birds in the flock that will be rejected in the abattoir.”

Understanding where the problem comes from may help in devising a strategy for dealing with it, says Mr Jackson.

“One source of E coli infection for day-old chicks is the drinking water. The first thing the chick will do after tipping is go in search of a drink. That water will have been kept at 32C and, with a low flow-rate, provides an ideal environment for E coli bacteria to multiply. And if you add multivitamins to the water, it will be even better for bacterial growth.”

Respiratory diseases may also help E coli get established, as the tiny hairs lining the airways may have been damaged and will be less effective at filtering out bacteria. These bacteria then reach the air sacs, which can become infected and undermine the bird’s ability to fight other diseases.

“The air sacs are thin and very delicate, with no blood vessels, so once the bacteria get there, it’s very difficult for the body to ship in white blood cells and fight off the infection. Because they are so thin, it is also just a short hop for the bacteria to cross the air sac and get into the abdomen, to cause peritonitis and perihepatitis.”

Wounds are another possible entry route for E coli, especially between 15 and 25 days, when the feathers are not fully developed around the back end and scratching can enable the bacteria to get in under the skin.

“It does not take a particularly deep scratch with a dirty claw for cellulitis to take hold, particularly in a shed with damp litter ” says Mr Jackson.

And then there are immunosuppressive diseases, such as Gumboro, that undermine the bird’s overall defence system by destroying white blood cells.

“Gumboro disease in its severe form is rarely seen, thanks to vaccination programmes in breeder flocks, which allow antibodies to come though into the egg and chick.

“We also vaccinate commercial broilers on farm. But sub-clinical Gumboro causes low-level damage to the bird’s immune system that may be sufficient for bacteria such as E coli to take hold.”

The overriding message is that the whole supply chain needs to pay close attention to detail, from the breed companies to the broiler farms.

“In particular, water hygiene needs to be taken more seriously,” says Mr Jackson. “It’s not good enough just to throw a few chlorine tablets into the header tank, or run sanitiser through at turnaround. It needs to be an on-going process.

“Farmers should also seek to improve gut health and reduce wet litter, so that birds that are doing any scratching are not doing so with potentially infectious claws.”

Good vaccine administration is also essential. “Producers should review their Gumboro vaccination programme annually with their vet or area field manager, to ensure that the right product is being used, on the right day and according to the manufacturer’s guidelines. It’s quite amazing the number of times I see farmers not administering the vaccine correctly. They may have been putting chlorine or peroxide through the Dosatron and then the vaccine in at the same time. The two don’t mix.”

Good overall farm management plays a big part too. Long-term stress can elevate the levels of steroids in the birds’ bloodstream, and steroids are imunosuppressives which dampen down the immune system. Poor ventilation will exacerbate this, jeopardising the ability to fight off E coli.

The UK laying industry has been vaccinating for E coli on some farms for a number of years, as has the broiler breeder sector. But trials organised by St David’s vets and Zoetis using the Poulvac E coli vaccine has also shown potential benefits for broiler producers, says Mr Jackson.

Six farms were involved, with half the sheds given vaccine in the water on day nine, and the other half not vaccinated. The farms all had a history of E coli-related rejects, and the abattoir was not told which birds had been vaccinated.

The results showed that there were very few differences between the vaccinated and non-vaccinated sheds in terms of average daily weight gain. But nearly all farms had a lower percentage of E coli-based rejects in sheds where the vaccine was used, which fell from 5.71% to 3.94% on the most disease-challenged farm.

“The higher the levels of E coli, the more effective the vaccine is likely to be,” says Mr Jackson. “But it is not a substitute for good management.”