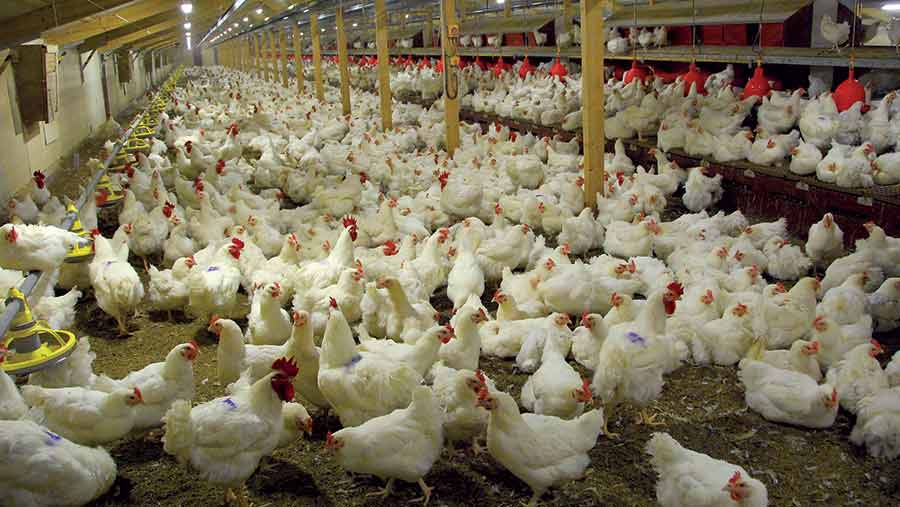 When it comes to managing breeding stock, producers should remember that, what benefits the broiler breeder will also benefit the broiler.

“Uniformity is key in our industry, and we must do all we can to reduce variation and increase uniformity,” says Bart Swart, a nutritionist with feed manufacturer ForFarmers. “It is the solution to a lot of problems we encounter in our daily practice.”

Having high uniformity means that more birds are ready for photo stimulation at the same time, and the flock will reach peak production faster.

See also: Getting the most from broiler breeders

It also makes it easier to adjust feed and nutrient allowances to suit each individual, effectively “feeding the flock as if it is one bird”.

How to achieve uniformity

Getting good uniformity in an everyday feeding system is quite a challenge.

For example, feeding diets with lower nutritional density might encourage good uptake, but the supply of energy in relation to genetic needs remains low.

“In order to close the gap between desired energy intake and actual energy allowance we need to allow birds to grow faster,” says Mr Swart. “Maybe we can photo-stimulate birds at a younger age. Or we can reconsider the way in which we grade – though labour costs are too high for frequent weighing of animals.”

The easiest tool to encourage uniformity early in life is to use a starter pellet or a crumb, instead of mash, for the first two weeks. “My experience within our own rearing company with a pelleted starter is that it not only improves early uniformity, but it also results in higher 10-day bodyweights.”

Having achieved good uniformity in rear, the aim is to then maintain it during lay, which again requires good bird and feed management.

Compared to laying hens where flocks produce over 90% for 50 weeks in a row, broiler breeders undergo much greater changes. They continue to gain weight, egg production declines steadily while egg weights increase.

As a result, the daily need for energy and amino acids changes too, and this can be amplified by deterioration of the feather cover of birds.

“With good feathering, a large part of the extra energy that is needed to maintain the increasing bodyweight is compensated for by the reduction in energy needed for egg mass,” says Mr Swart. “But if a flock loses feathers and heat loss is increased, then the energy needed for maintenance is increased by 15kcal per day.”

In terms of feed, that equates to an extra 5g a hen a day, and if feed allowance is not increased, egg production will drop.

“These five grammes of extra feed not only contain energy, but also amino acids, which the hen needs less of as she ages. A too high intake of the amino acid lysine results in more breast meat deposition and this in turn increases the energy needed for maintenance.

“Another negative aspect of high lysine intake is the negative impact on fertility, possibly caused by a lower survival rate of sperm in the hen’s oviduct.

“Furthermore, excessive intake of amino acids also stimulates egg weight, and this should be avoided because heavier eggs have thinner egg shells resulting in less settable eggs, lower hatchability and an impaired quality of day-old chicks.”

So keeping plumage in good condition during lay is important, says Mr Swart, and that means good management in rearing and appropriate nutrition.

Phase feeding allows the broiler breeder to meet the bird’s needs more accurately as she ages. Indeed, it is advisable to change the diet and feed a higher energy/lower amino acid ration, especially if plumage condition deteriorates and more energy is needed.

“But phase feeding should not be seen as a tool to simply lower costs,” says Mr Swart. “Use it to optimise the bird’s nutrient supply and benefit from the extra output.”

Another positive aspect of phase feeding is that it allows the producer to positively influence egg shell quality.

“In my opinion, controlling egg shell quality starts earlier in life, but there are certainly things you can do in a diet for the last 20 weeks to support shell formation.”

It is common to increase calcium levels in combination with lowering available phosphorous.

Whether the extra calcium is really contributing to a better egg shell is however questionable.

Because the spread in time of oviposition increases when a flock ages, the form in which the calcium is present might be more important than its absolute dietary content.

“Make sure that your coarse limestone is bigger than 2mm and that there is sufficient calcium coming from fine limestone,” says Mr Swart.

“A wide range in speed of calcium solubility will lower the amount of hair cracks, thereby contributing to hatchability.”

The addition of butyrate also stimulates calcium absorption and supports the production of proteins involved in shell membrane formation.

Liver functionality is supported by having sufficient amounts of vitamin E for cell membrane integrity and enough choline, betaine and B-vitamins.

The use of carnitine also aids the liver’s fatty acid metabolism, though this is somewhat lacking in today’s vegetable diets.

But carnitine can be added at relatively low cost, and has also been shown to contribute positively to fertility and hatchability. It might also have some positive carry-over effects on the offspring.

The hen’s own medullary bone is also important as a stock of calcium, supplementing the supply from the gut at times when calcium need for shell formation is highest.

Research has shown that using so-called “active” vitamin D3 helps maintain the medullary bone towards the end of the laying cycle, better than when feeding vitamin D3 only.

But it is not only the availability and utilisation of calcium that determines egg shell quality; the structure of the shell membranes is also of great importance, explains Mr Swart.

“Maintaining a good antioxidant status in the hen throughout the laying cycle avoids damage to the tissue of the oviduct, contributing to the right formation of the membranes.”

Besides vitamin E, a sufficient supply of selenium, being part of the body’s antioxidant system, is also needed. “Use of selenium not only supports productivity of the broiler breeder hen, it also improves semen quality in males,” says Mr Swart.

“So what benefits the breeder hen in terms of productivity and fertility, also benefits their progeny.”