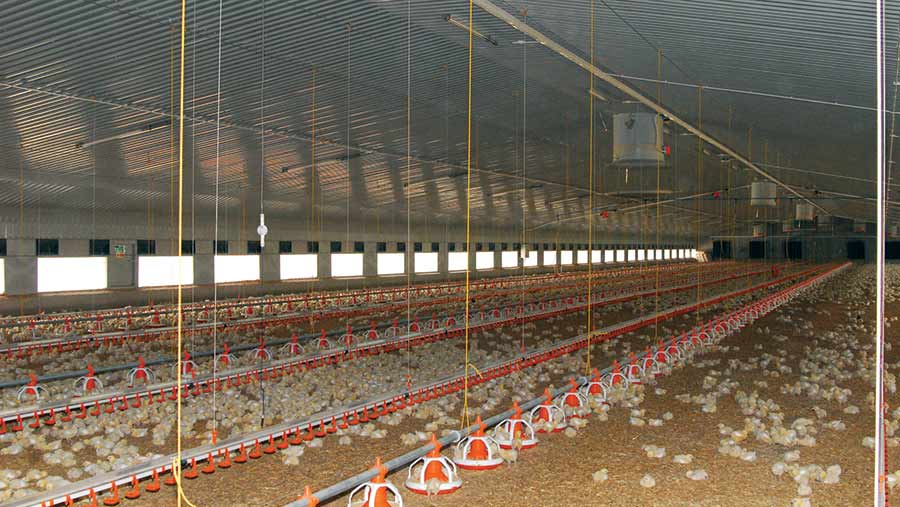 With feed accounting for up to 70% of total production costs, efficiency of use is one of the crucial factors as broiler growers look to maintain margins.

A slight improvement in performance here can result in an extra couple of pence per kilogram advantage on the bottom line.

The most common method for broilers is FCR, calculated by the amount of feed needed per kilogram of bodyweight gain, and should be as low as possible.

Throughout the life of the broiler, the best FCR is seen in the first five to seven days, due to low or almost zero heat production in chicks during this period.

This results in a lower calorific expense and an overall lower maintenance cost. Indeed, the FCR can be lower than 1:1 up to this point.

To get the best results during this short period it is critical to ensure adequate access to feed.

The most important part of preparation for brooding, therefore, is to provide sufficient feeding space for the birds by having supplemental chick trays and/or chick paper.

If chick trays are used, there should be one tray per 50 chicks, evenly distributed throughout the brooding area.

Refresh the trays two to three times a day with new feed, as doing this once a day doesn’t stimulate feed intake sufficiently. The golden rule is never to allow trays to run out of feed.

At the fourth day the trays can be moved closer to the feed system, before removing them around day seven. It takes hard work and dedication to achieve the optimum early feed intake using this method.

When using chick paper, at least 50% of the brooding area should be covered with a paper type of sufficient strength that will last until at least day five.

The paper needs to be placed near the drinking system. If only one application is used, 75g of feed per chick must be offered on the paper, which will be easily consumed in three to four days.

Growers are sometimes afraid of feed wastage and are reluctant to place 75g of feed on the paper. But they need to appreciate that, at the start, each 1g of feed consumed increases bodyweight by 1g.

Studies have shown that the waste of feed using paper is approximately 15-20%, while feed intake in the first four days from feeders is between 25-30g.

Based on these numbers, a theoretical estimate of cost-benefit can be made comparing 35g and 70g of feed per chick on paper, (see table below).

To ensure that all preparations have the maximum benefit, a simple crop-fill evaluation should be performed the morning after placement.

A sample of at least 100 chicks from three positions in the house is needed; the absolute minimum of chicks with full crops should be 85% at this time.

This simple evaluation will let you know if you have adequate supplementary feed available.

Providing sufficient feeding space in the first days helps to increase the seven-day bodyweight and supports the efficient use of the yolk sac for growth.

The importance of feed intake during the first seven days cannot be overemphasised. It is the only opportunity to gain such growth and provides the basis for good overall performance.

Attaining higher seven-day bodyweights generally results in higher bodyweights at the end of the flock, better uniformity and lower mortality through less culling.

The reduction of 10 points in FCR will result in roughly 170g less feed being needed per broiler – easily making up any feed wastage by placing more feed in the first days.

Many factors help decrease FCR associated with increasing seven-day bodyweight, but the most important one is better uniformity.

The graph below left shows the weight distribution of a flock with an average seven-day weight of 182g; and in this good flock, about 12% of the chicks are still below 160g.

This flock could improve the feed intake of weaker chicks by increased supplementary feeding space and feed availability, raising the overall performance.

Uniformity of a flock starts from the first hour after placement and the influence of uniform feed intake cannot be corrected later.

To take full advantage of the modern broiler’s genetic potential, chicks should never have to search for their next meal.

Ensuring good feed availability will ensure consumption at an early age, resulting in successful seven-day bodyweights, so laying the foundation for the best feed efficiency.

Edward Diehl is a nutritionist and commercial trial manager with breeder Cobb.