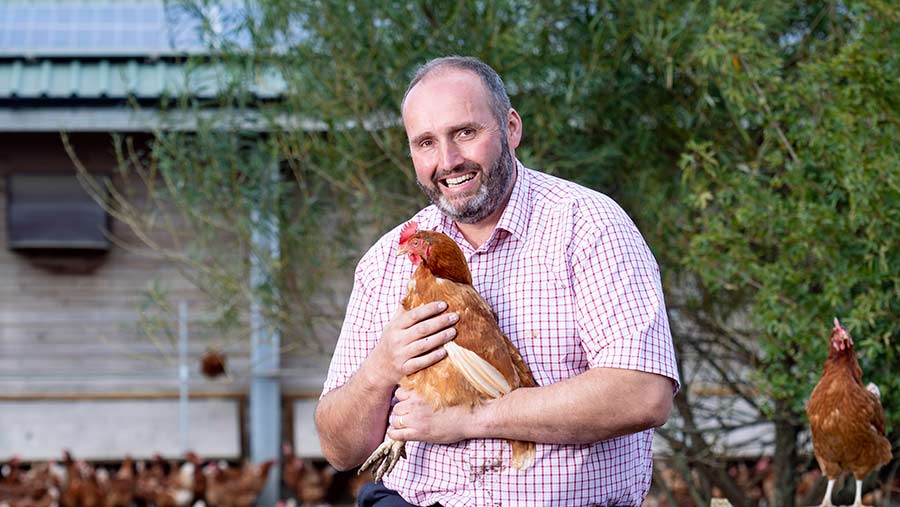 Phillip Crawley has been named the Farmers Weekly 2018 Poultry Farmer of the Year.

Phillip, who is joint managing director of Sunrise Eggs, says he entered the Farmers Weekly Awards in order to celebrate a family business of which he and his brother Ady are very proud. And winning is testament to decades of hard work, innovation and investment.

Although you may not have heard of the firm, the Leicestershire-based egg producer-packer, built up over two generations, today markets the eggs of close to a million birds. 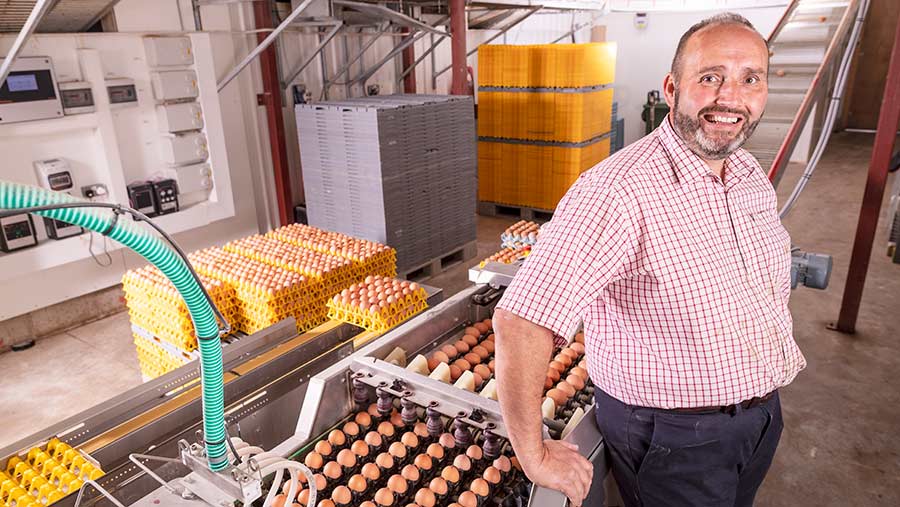 Established in the 1970s, it is a major player in the egg sector, supplying retailers, restaurants and smaller shops across the country. The business farms 575,000 hens itself, and has about 300,000 additional hens producing eggs on contract.

Phillip is clearly proud of the operation that his father first established after leaving a career as a physicist building reactors for nuclear submarines in the early 1970s.

Initially focused on pullet rearing, the outfit moved into caged hen production before switching focus to free-range as the relatively young industry grew.

These more recent years, with the two brothers at the helm, have been marked by innovation. The farm was the first in the UK to trial LED lighting for its poultry sheds back in 2013.

In the packing centre, automation has been invested in heavily, with robotic arms and sorting machines grading and placing eggs in their retail packaging.

Free-range egg production began in 1997 and there has been steady expansion since. “That’s what the consumer wanted and shows the growth in free range,” says Phillip.

Production on a multi-age, multi-site set-up can be a challenge, but rather than the highest number of eggs, the focus is on quality. “Our interest is in first-quality class-A eggs. As a producer-packer, we don’t make any money from second-grade eggs – we supply retail.”

Out on the farms, there has been investment in solar energy, but more noticeable is the extensive trees growing out on the range, with birds happily making full use of the shady space to exhibit natural behaviour.

“Tree planting didn’t feel right to start with,” says Phillip. “It was a funny pill to swallow, but it was the right pill. The birds like the trees.”

Overall, the business has steadily expanded alongside the growth in free-range, and shows no sign of slowing.

“We actively encourage visits by young farmers, scouts and students from Brooksby Melton College,” says Phillip. He has also hosted children on the autistic spectrum and people with varying levels of sight loss from the Royal National Institute of Blind People.

Within the poultry industry itself, Phillip sits as vice-chairman of the NFU’s poultry board, which helps drive the union’s lobbying effort for the sector. He also represents the NFU at the Laying Hen Welfare Group, which works with Defra to develop policy sustainably.

Sunrise Eggs was also involved in trials investigating beak trimming – a major issue for the poultry sector. It was one of the only commercial-scale farms involved in the project and required a big personal risk, that paid off for the wider industry.

On the prospects for his sector, Phillip says: “Poultry production has been the good news story in farming. It has grown and grown – it’s wonderful because it gives an added income to the business, and gives the next generation something to do on a family farm.”

“Sunrise Eggs is a family business producing safe, wholesome and nutritious food, respecting the environment and bolstering the heart of Britain’s food supply. Many congratulations on the win!”