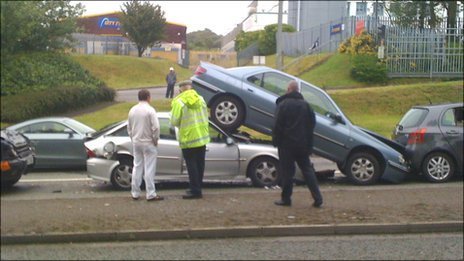 A judge has describe an incident where a chicken bone resulted in a four car pile-up as “…the most bizarre case I think I have ever come across or heard about.”

We at the Feathered Forager tend to agree.

The BBC reports Andre Varciana fronted court following an incident in Fforestfach, Swansea where, after buying some chicken pieces, he threw a chicken bone at his friends who were on the central reservation of a dual carriageway.

A police officer in an unmarked car saw the bone and made an emergency stop causing the other cars behind to brake, leading to a four car nose-to-tail pile-up.

District judge Vivian Manning-Davies said she was initially going to impose a hefty fine but had changed her mind, thinking that punishment wasn’t proportionate due to the object thrown being so small.

Mr Varciana was discharged and ordered to pay £85 in costs.

And the moral of the story? Well we’ve seen Jim Carrey suffer from the power of poultry and now a humble chicken bone cause a pile up. Take heed, chicken can be a delightful blessing but not a food stuff to be treated with contempt.