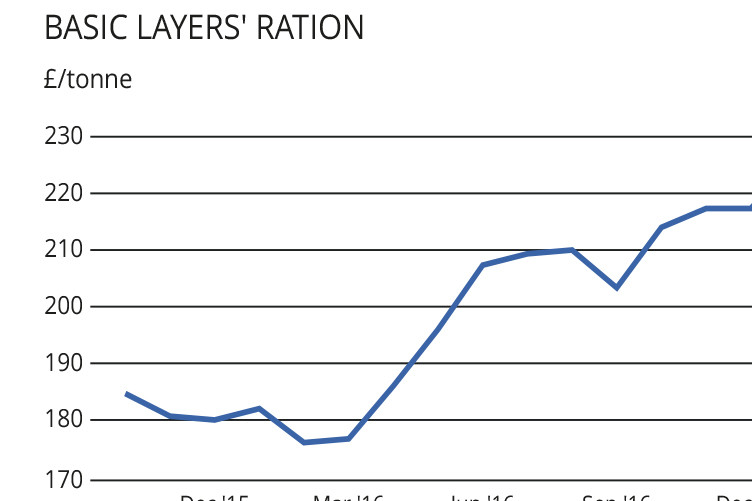 Our basic layers’ ration has dropped £4/tonne over one month and £12/tonne over three months, as shown on the chart alongside.

Most of this is due to the decline in global soya prices, which has led to a drop in UK soyameal of £44/t since March.

The fall in wheat prices is less influential. Although UK feed wheat prices have fallen around £5/t over two months, they are only down by £1/t or so since March.

Apart from the prevailing worldwide trends (see below), closer to home there are concerns about the level of UK wheat stocks on farms.

There was no end-of-February Defra stocks survey carried out last year, but compared with 2015, this year’s store is 29% lower, at 3.5mt compared with 4.9mt two years ago.

However, there is a wide margin of error reported to be surrounding the latest stock figure, so the actual picture is unclear.

Beyond the UK, according to traders, the indicators for wheat are predominantly bullish at present, while those for soya continue to be bearish.

One uncertain note is struck by the latest global stocks predictions for maize, which inevitably have a knock-on effect on the wheat market.

According to the most recent International Grains Council forecast, world maize stocks could be about to experience the largest annual decline since the 2010/11 season.