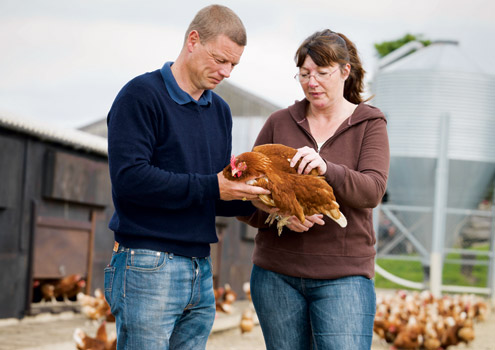 Keeping egg size under control is a top priority at Riverside Farm, as the flock of 7,000 Lohmann Browns reaches the 50-week stage.

“During the colder winter months the birds may develop a tendency to eat more, which can result in laying a larger egg,” says consultant Steve Clout of Humphrey Feeds.

“This can be damaging to the bird, especially because they are a little bit older and therefore have less muscle for support.

“We have seen cases on other farms where the birds eat more, lay an extra-large egg and have blood around their back-ends. This in turn can lead to vent pecking, increased stress and a dip in performance.”

Maintaining the right feeding regime to sustain production and keep a consistent egg weight has therefore been an area of focus for the team at Riverside Farm during the past six weeks. “The general rule is to monitor the birds as much as possible,” says Mr Clout. “Control, attention to detail and spotting any issues early are vital in the current climate, as small mistakes can be very costly.”

Farm owner Linda Courtney says she is pleased with the birds’ performance. “They are strong and steady. Given the current issues around supply and demand, high feed costs, a poor harvest, terrible weather conditions and volatility in the marketplace, a consistent flock of birds, that we can efficiently manage, is just what we need.”

At 50 weeks, the flock is achieving 90% lay. “They are a happy and relaxed flock, producing a large egg with good shell quality and colour,” says Mrs Courtney.

“A small number are immature and not laying as well as the others, which is unfortunately causing a slight dip in overall productivity. But if performance stays consistent at 90%, then it means the flock will hold its own as we enter the final stages of the laying cycle.”

Mr Clout attributes the good performance to the work put in during rear and in the early stages of lay. “Working closely with Linda and her partner Ralph Eldridge, we continue to closely monitor egg weight, shell quality and feed efficiency. With just over 20 weeks left, we are looking for consistency in everything we do.”

Looking back at 2012, Mrs Courtney is satisfied that the business has overcome a number of significant challenges.

“We had an issue with E coli in the summer, but thankfully, with the help of Steve and our vet, that passed quickly without any significant damage to the flock’s production. The birds were initially slow to range, but soon built the confidence to go outside and join the sheep, which also graze the range.”

This year will also be remembered as a very wet one. “It seems like we have had consistent rainfall all year and, actually, the cold weather that arrived in early December gave the farm a welcome break from the rain.

“The chickens were healthy and coped well with the wet weather. But we kept a very close eye on them as worm and disease burden increase when the range is excessively wet. The birds would wait until the rain stopped and then rush outside to find worms that had washed to the surface. It was comical to watch at times.

“We also laid metal slats by the pop holes to reduce mud being carried back into the shed and to help reduce moisture in the litter.”

According to Mr Clout, the success of the flock so far can be attributed to two key factors.

“Firstly, the birds had a good start. They were strong out of rear and above target bodyweight. Secondly, Linda and Ralph have managed the flock, and indeed the general day-to-day running of the farm, with a high degree of skill and professionalism.

“They put a great deal of time into managing the birds during the early stages of the laying cycle and therefore had a good understanding of their behaviour, allowing for decisive action if any problems occurred. This has resulted in a strong and robust crop.”

This attention to detail is especially vital at this point in the laying cycle. “At 50 weeks we are starting to look ahead to manage the final stage of lay, ensuring that the opportunity is taken to make a positive margin in the final months of production as all external costs have now been covered. Any serious problems from here on in will undoubtedly affect the overall performance of this flock, which can be soul destroying if everything has gone to plan for 50-plus weeks.”

With 22 weeks left for this flock, thoughts have already turned to the next crop of birds planned for Riverside Farm.

“I have spoken to the team at Humphrey Pullets and we have arranged for the new flock to be delivered on 17 June,” says Mrs Courtney.

“I have also put a date in the diary to visit the birds in rear in early May. We are yet to decide on the breed, but will likely take Lohmann Brown again.”

The partners are planning to extend their existing poultry shed to increase the capacity of Riverside Farm to 10,000 birds, while meeting EU stocking density regulations.

“The concrete has been laid and the plan was to finish the shed extension in time for our next flock, but that is now looking unlikely. The wet weather, an oversupplied market, plus a lack of any significant profit to reinvest in the business has really set us back. We recently had a price increase of 7p/doz, which has helped offset high feed costs, but is still not enough to cover substantial long-term reinvestment,” says Mrs Courtney.

“Business has been tough and profits have been limited – I’m not going to shy away from admitting that. We have really seen the benefit of selling some of our eggs to private customers, which at the moment is keeping us going. It’s not a huge amount of business, just over 10% of our total production, but it’s enough to keep us afloat and stay positive about the future.

“I enjoy working with different businesses, selling our eggs locally and adopting an independent approach. Our packer, Hoads Farm, has been excellent in buying the majority of our eggs and allowing us the flexibility to carry out a small percentage of private sales.

“We recently had a local school for children with learning disabilities visit the farm to interact with the birds and learn more about where eggs come from. The children were lovely and asked lots of questions. This is something we are keen to do more of in the future, opening our gates to the public and showing them what free-range egg production involves and allowing consumers to make informed decisions about the eggs they buy.”

Poultry World will return to Riverside Farm in the spring