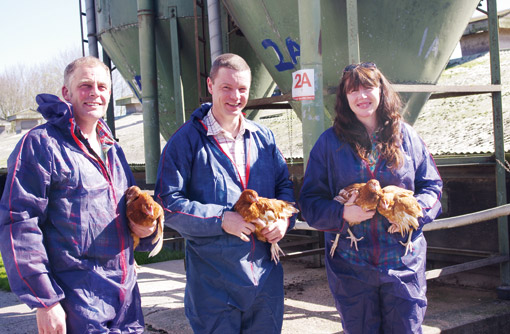 Poultry World is following the progress of a single flock of free-range layers from hatching, through rearing and then onto a free-range unit for 56 weeks of the laying cycle

The featured flock of just under 7,000 Lohmann Browns has now been in residence at Riverside Farm – a conventional free-range system managed by Linda Courtney and her partner Ralph in Sussex – for just more than a month.

The birds were hatched at the Millennium Hatchery in Studley, Warwickshire, on 1 January 2012 and delivered to a Humphrey Pullets rearing farm on the same day.

“We are very happy with how the birds developed in rear,” says Charles MacLeod, general manager at Humphrey Pullets. “We weighed the birds each week and, on average, they were well ahead of breed target, with a finishing weight of 1,488g at 16 weeks (see graph). The flock was even, mortality was low and lighting hours were successfully decreased from 20 to 10 hours a day.

“We have been trialing automatic weighing systems to increase the number of birds weighed weekly and to provide us with daily updates, allowing us to fine-tune management of the rearing flock and to build up data regarding the effect of vaccination programmes on weight gain.” 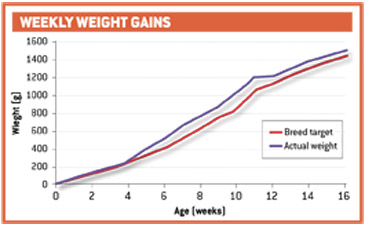 Mrs Courtney visited the flock in rear, with Steve Clout from Humphrey Feeds, who advises her on optimising the flock’s performance until the end of the laying cycle.

“We want this flock to be in optimum health to achieve its full potential” says Mr Clout. “Our focus during the final few weeks of rear was on ensuring the birds were above target body weight, with a strong frame, helping to prepare them for the demands of the laying cycle. We know that birds can lose body weight during transit, so we plan ahead to minimise weight loss and stress.

“Successful rearing is hugely important to how the flock will go on to lay. It’s a bit like working with an athlete in the run-up to the Olympics – correct preparation is vital to ensure a high level of performance.”

The flock was delivered to Riverside Farm on 25 April, having spent 16 weeks in rear. On the day of delivery the birds were vaccinated for a final time before being loaded on to a lorry.

“We caught the birds late afternoon, using a specialist catching team which handles each bird by holding both legs – the safest and most humane method,” says Mr Clout. “They were then transported during their rest time in the early evening, when the traffic was less and the temperatures lower. Furthermore, Linda and Ralph called on friends and family who work during the day to help unload the birds quickly and efficiently on arrival.”

Riverside Farm operates a free-range floor system with a deep litter area covered by slats and with nest boxes running through the middle of the shed. Pop holes lead to an outside veranda and onto the range.

“The sooner you can house the new flock the quicker you can start generating an income again, so we really pushed for a quick turnaround,” says Mrs Courtney. “It took just under three weeks from depopulating the old flock to the arrival of the new birds. We even had a day off as well!

“The process of preparing the house is one that we have done many times before and involves manure removal, cleaning, disinfecting, testing for salmonella and fumigating. All water and feeding systems are serviced and maintenance carried out where required. For example, we installed new aluminium fan covers because the previous wooden ones had rotted.”

The birds were unloaded off the lorry by a forklift in modules, made up of 12 trays, each holding 32 birds – so 384 birds a module.

“You find the birds are generally calm and placid on arrival, because it’s well into the evening at this point” says Mr Clout, who helped unload the new flock. “The modules are unloaded and the individual trays are then carried down the shed and the birds released.

“The birds find their way to food and water very quickly. This is where like-for-like rearing proves to be beneficial, as the birds are already familiar with the set-up. Ideally you want the birds to adapt to their new surroundings as quickly as possible.”

“I really enjoy starting with a new flock. It’s an interesting time for a poultry farmer,” says Mrs Courtney. “You feel positive about the future. Each crop is different and you never really know how they will be, so it’s a period of expectation, excitement and hard work.”

The first few weeks are crucial to the long-term success of the flock. “We have been walking the shed every two hours so the birds become accustomed to us as well as their new environment. The more time we spend with the birds now the better – we pick up any floor eggs straight away to try and discourage other birds from laying outside the nest box.”

As the flock was well ahead of its target weight, 12 hours of light could be provided straight away. “Sometimes you have to hold the light back to allow the birds to come up to the required weight, but not with this crop,” says Mrs Courtney. “We expect the birds to start laying at 20 weeks as we increase the light further. We are already collecting about 300 eggs a day, with each egg weighing between 30 and 55 grams. The birds have a strong frame that can support laying a larger egg at this early stage.” 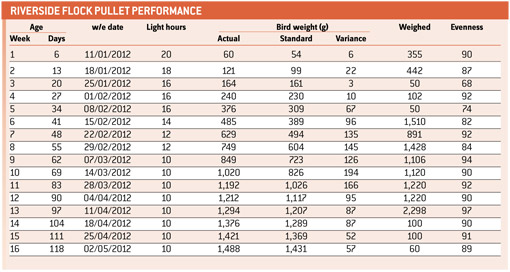 The late spring is a good time to take delivery of a new flock, as the birds are stimulated by the natural increase in light, temperature and changes to air pressure. Although it’s been raining almost constantly during the past few weeks, the birds are now showing signs of reacting to the impending summer months.

“It is too early at this stage to make solid predictions about how this flock will perform, but we know plenty about its history and that is extremely beneficial,” says Mr Clout. “The birds were at a really good weight when they left the rearing farm and we are confident the flock will go on to lay a good number of medium to large eggs consistently for the next 50 plus weeks.”

Mrs Courtney says she is delighted with how the new flock has settled in. “Overall, the future of the free-range sector is looking far more encouraging following two recent egg price increases, and we hope there will be more to come.

“We have recently been granted planning permission to extend our shed and will increase our flock capacity to 10,000 birds, adhering to EU stocking legislation of nine birds a sq m.

“If this flock continues to be successful we will look to invest, possibly this year, or early in 2013. You could say therefore that the success of this flock is crucial to the future growth of our farm business – no pressure there then!”

* Poultry World will return to Riverside Farm in September, to see how the flock is progressing.