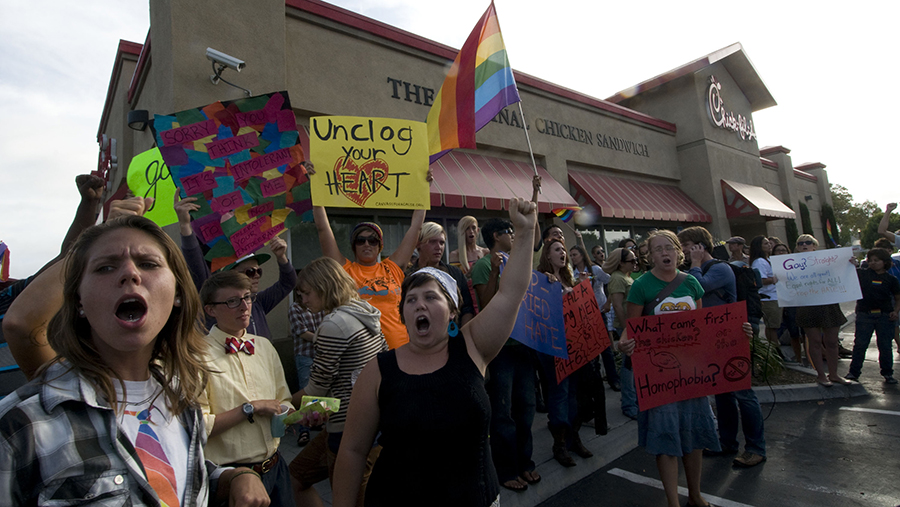 US fried chicken giant Chick-Fil-A has been served notice at its first UK store in Reading, Berkshire, after protestors objected to its owners’ stance on lesbian, gay, bisexual and transgender (LGBT) people.

The restaurant chain is one of America’s largest, with some 2,400 stores in the states. It is most famous for its fried-chicken sandwiches, which it claims to have invented.

But in exporting the concept to British shores, it also brought with it objections over the owners’ fundamental Christian beliefs.

Stores in the US don’t open on Sundays, for example. Workers are also paid more than twice the national average, and the company gives generously to Christian charities.

But more controversial is the funding of organisations opposed to gay marriage.

Chick-Fil-A has donated more than $5m to such groups since 2003, according to Forbes, including the now-defunct Exodus International, which was a proponent of “conversion therapy” for gay people.

In a 2012 speech, Dan T Cathy, the chain’s chief executive said: “We are very much supportive of the family – the biblical definition of the family unit.

All this raised the ire of Reading Pride, which has held protests outside the Oracle shopping centre in which the first UK Chick-Fil-A is sited.

The group said: “The chain’s ethos and moral stance goes completely against our values, and that of the UK as we are a progressive country that has legalised same-sex marriage for some years and continues to strive towards equality.”

A statement by the Oracle shopping centre issued just eight days after the chain opened, said Chick-Fil-A’s lease would not be extended beyond its initial six-month pilot, .

It told the BBC “We always look to introduce new concepts for our customers. However, we have decided on this occasion that the right thing to do is to only allow Chick-Fil-A to trade with us for the initial six-month pilot period, and not to extend the lease any further.”

Reading Pride welcomed the decision, but said it would continue its protests until the chain had closed its doors for the final time.