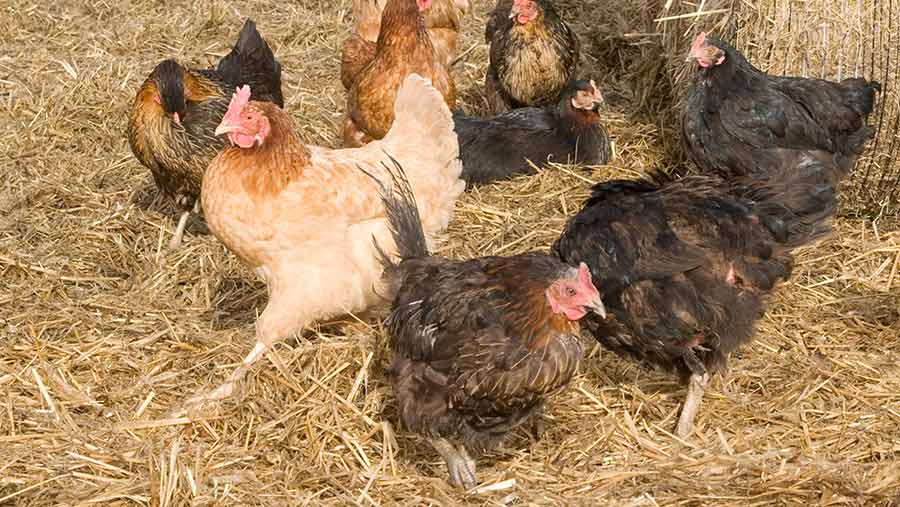 Organic poultry production has long had a challenge in getting feed rations right.

Farmers adopting the system accept that bird performance will be lower but, in theory, birds reared under less-intensive conditions can command a higher price.

But finding a diet that gives birds the best performance possible while adhering to organic principles is not so simple.

Synthetic amino acids, which do so much to balance conventional birds’ diets, are prohibited, as are ingredients such as defatted soya bean meal.

By excluding pure amino acids, there is a need to increase protein levels to ensure birds can access enough of the nutrients they need, which in turn can create issues with excessive nitrogen excretion.

A pan-European project has sought to address this challenge.

The Ok-Net EcoFeed project was set up last year with EU funding, and counts a broad range of 19 partners across 11 countries ranging from farmers to feed mills to NGOs and universities as its members.

In the UK, the Soil Association is co-ordinating efforts, and recently hosted farmers at an open day to discuss some of the project’s early findings.

One producer, Mike Mallet, told the meeting he felt he was yet to crack the protein problem, despite extensive trials.

He is manager of Maple Farm, Kelsale, and runs nine small flocks of 300 layers, which are kept in regularly moved 12x4m sheds.

He keeps six different breeds of bird on the farm, but is full of praise for the Silver Link, a hybrid that is slightly heavier than a Lohmann Brown. “They are very hardy, fantastic layers, and have a reasonable feed intake,” he says.

Eggs are marketed in the local Waitrose and a number of Co-op stores.

Mr Mallet runs an inclusive system, growing his own wheat, peas and beans in a staple ration, bringing in soya and other proteins to complete the feed.

The modern layer requires a diet of about 18% crude protein (CP), and while field peas can reach a CP of 25% and sunflowers more than 30%, it is still well below the equivalent soya level of 45%.

With a mill on site, Mr Mallet has now added small quantities of fishmeal to the diet in a bid to boost protein levels.

Fishmeal has high levels of essential amino acids, including methionine and lysine, and it also has a good balance of unsaturated fatty acids and vitamins.

Concerned about potential taint issues, he has fed at a 2-2.5% inclusive rate, and is happy with the outcome.

There was an ambition to dehusk and toast beans on the farm, which can reduce the degradability of proteins and increase the digestibility of essential amino acids – but the cost of setting up such a system was prohibitive.

Instead, Mr Mallet is exploring a sprouted grain facility, which should provide green material of high digestibility through the winter and reduce antinutritional factors.

Trials have found that sprouted seeds in feed given to layers could boost financial returns and free up land for food production.

Starfish (Asterias rubens), which can have a crude protein concentration between 38% and 70% and an ileal digestibility in layers of 0.70%.

Since 2015, starfish have been caught in Denmark and made into starfish meal, which is then used in aquaculture.

Those birds showed a production performance equal to fishmeal.  It could replace fishmeal but, in the UK there could be feed mill contamination risks.

Mussel meal, which is characterised by a crude protein content of 58-66%, and ileal digestibility of 0.71%, is high in Omega-3 and has a balanced amino acid profile.

Studies have shown that when feeding 4% 8% or 12% mussel meal to egg layers, it maintained their production performance compared with fishmeal, but the yolk became more red with increasing proportions.

Seaweed species, including sea lettuce and green protein, have potential although there may be some organic certification issues with the former.

Seaweeds, as long as they are grown in good-quality seawater, also have antimicrobial benefits.

Insects, which are still awaiting European Union approval as an animal feed.

Protein and specific amino acid issues will need to be closely monitored, but there is potential for insects to be fed to poultry in small quantities.