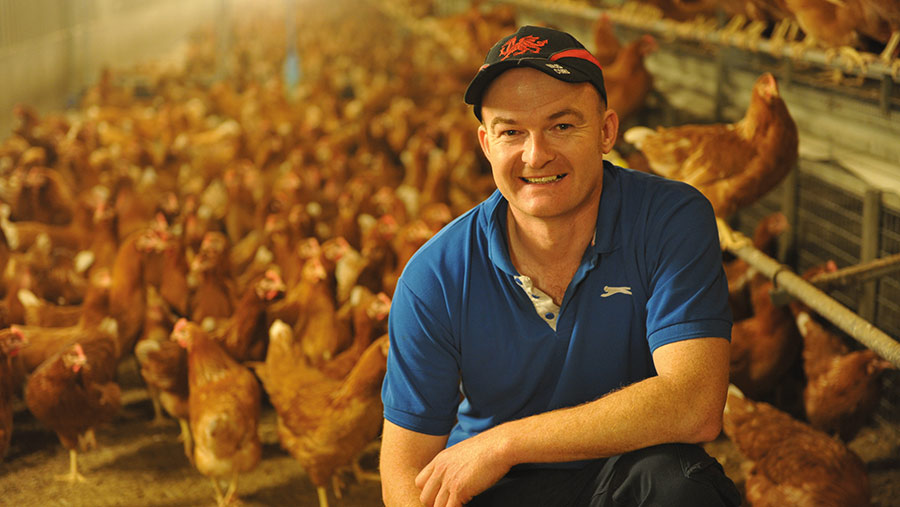 Ammonia levels have been cut by 75% and antibiotics use reduced to zero after a high-tech sensor system was installed at Wern Farm in Powys.

Damp air affecting litter quality has been one of the biggest challenges at the farm since the poultry system was set up 10 years ago.

The 32,000-bird poultry unit sits a short distance from the Lake Vyrnwy reservoir in an area known for its wet climate.

Rainfall is high, at an average 2,300mm/year, says Osian Williams, who farms with his parents, Dafydd and Eleri, and his partner, Nikki.

The effect on ammonia levels and flock health

In previous winters, ammonia concentration in the sheds could be as high as 25 parts per million (ppm) when air humidity was high, and this was affecting flock health.

The 25ppm level is at the maximum long-term exposure limit for staff.

In a bid to resolve the flock health challenge, sensors were mounted on the inside and outside of each of the farm’s two multi-tier poultry houses.

For a 16,000-bird shed, sensors cost 14-55p a bird, depending on the required level of automation and complexity of the ventilation system.

The sensors also automatically operate systems to prevent bird health issues before they become a problem.

When measurements rise above set parameters, misting units linked to the sensors are activated and spray harmless bacteria on to the litter.

The bacteria outcompete infective organisms that would otherwise thrive in the deteriorating conditions.

Adding non-infective bacteria to the hens’ environment allows a population of “good” bugs to build up in the litter, keeping it in better condition, says Mr Williams.

This has reduced ammonia levels by 75% in the warmer summer months, from 20ppm to just 5ppm.

The spray costs about 28p a bird, although this can vary according to the level of cleanliness and contamination within water lines and on building surfaces.

Flock performance is now better because there is less ammonia in the shed, and Mr Williams suggests this is the reason why the mortality rate has decreased, to 2.7% from 3.7% recorded at week 59 in the previous cycle.

The effect on antibiotics use

The improved health has also seen antibiotics use cut to zero.

“If the products can help keep the birds in good health with a good immune system, hopefully they’ll be able to fight whatever challenges they have without antibiotics,” says Mr Williams.

The sensors outside the buildings measure wind direction, temperature, humidity and different weather variables as these can all have an effect on ammonia production inside.

Data is displayed on a dashboard on Mr Williams’ mobile phone and computer, and that information helps to inform his decision-making around improvements in how the shed is ventilated.

“We have altered the fans to reduce the amount of cold air coming in,” says Mr Williams.

“By stopping that damp air entering we also use less spray, so that keeps costs down.”

There are further savings on energy costs because the fans don’t need to run as frequently.

“We had been considering investing in a ground-source heat pump, but just altering the ventilation a small amount has been a great help to the economics because there is a cost to using the fans,” says Mr Williams.

He receives alerts on his phone, which means he can take remedial action quickly in unusual conditions.

“From the dashboard, we are able to see any changes in the birds’ environment,” Mr Williams explains.

“If the humidity is high and the ammonia levels are going up we can adjust the sensors to spray more often.”

When the conditions are altered, the data collected by the sensors monitors their effects.

Tweaks have been made to the system, including repositioning the automatic sprayers closer to the manure belts. The spray helps to dry out the manure, reducing ammonia levels.

The litter is now so dry that the sheds are only mucked out every two weeks.

“As there is less moisture in the muck it is lighter, which means it can be left for longer without causing damage to the bearings of the muck belts,” says Mr Williams.

“The longer we can leave the muck on the belt in the shed, the drier it is, and having dry litter helps with storage.” 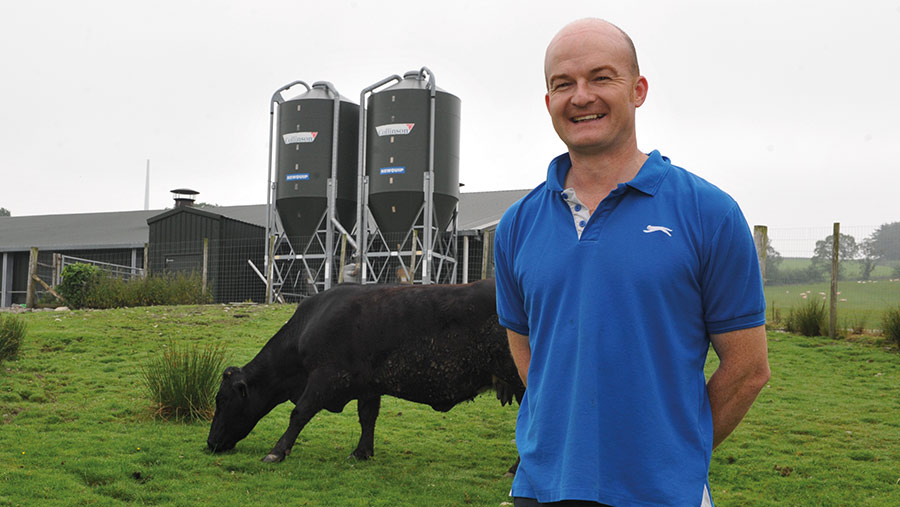 What other benefits are there?

The sensors were installed as part of Wern Farm’s work as a Farming Connect demonstration site.

There have been significant benefits in having access to data that is continuously collected and which allows the shed environment to be managed according to the conditions.

The shed environment doesn’t have to be checked manually, which means more efficient use can be made of labour.

“Before we had the sensors we wouldn’t have all that information at our fingertips, we have learned a huge amount from it,” says Mr Williams.

He has extended his laying cycle from 77 weeks to 80 weeks.

“As poultry farmers we surround hens with faeces, uric acid and ammonia but if we can take the pressure off them by reducing ammonia levels, they will pay us in eggs and there will be fewer mortalities,” he points out.

Although he has seen little difference in the number of eggs laid, what has changed is their size – they are on average 1g heavier.

“That’s where I want to be in the market,” says Mr Williams.

“You can get hens to lay whatever size eggs you want by adjusting their environment.”

What are the challenges of the system?

The outside humidity is higher during the wetter winter months, which makes it is more difficult to match the reductions in ammonia achieved in the summer.

For instance, in January 2021, ammonia in one of the sheds measured 8-12ppm and in the other it fluctuated from 10-25ppm.

Drier litter also means that the atmosphere in the shed is dustier. “I now wear a facemask whenever I’m in the shed, but that is probably a good thing for my long-term health regardless of the dust levels,” says Mr Williams.

The Intelligent Barn sensors at Wern Farm are linked to the low-power long-range wide area access network (LoRaWAN), which works on a radio frequency.

This system is of particular benefit in rural areas where communications infrastructure can be poor.

Although the mobile phone signal at Wern Farm is reasonably good, Mr Williams says LoRaWAN enables a continuous flow of real-time data from the sensors without relying on a phone connection.