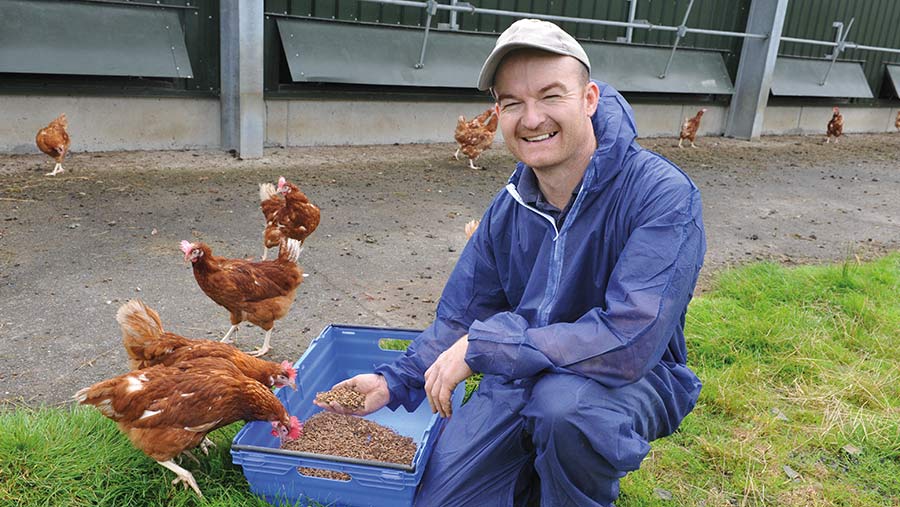 Millions of black soldier fly larvae, bred in a converted shipping container, are helping to boost the protein content of feed at a laying unit in Powys.

The larvae are grown in a high-tech, mini-insect farm, built within a shipping container on Osian Williams’ Wern Farm near Welshpool.

Mr Williams who runs the free-range farm with his parents, Dafydd and Eleri, and partner, Nikki, aims to replace a percentage of his birds’ soya-based diet with maggots to help reduce carbon emissions.

The firm also supplies batches of freshly hatched black soldier fly neonates, which are sent to the farm from a breeding facility every few days.

Growth is rapid – the larvae can increase in length from 1mm to 25mm and expand to 5,000 times their body mass in less than a fortnight.

The flies require a temperature above 25C for breeding and growth, which in the UK means using climate-controlled systems.

Mr Williams’ farm business supplies the unit with power and a feedstock.

The feedstock is made up of rejected chicken feed from a local supplier, and delivery costs are covered by the company.

Waste feed is stored in a 6t silo on the farm, refilled every one to two months, depending on consumption.

Regulations only allow pre-consumer waste, such as fruits, vegetables, grains, slaughterhouse waste and unprocessed eggs, to be fed.

Food waste is put in at one end of the shipping container and trays of mature larvae are taken from the other.

Larvae growth rates depend on the types of feedstock used. Bioconversion rates are high, which means the larvae are efficient at turning waste into fat, protein and chitin, a prebiotic fibre.

The average live larvae production of the X1 is about 47t/year; this equates to more than129kg/day.

While the pupa stage – when the larvae are ready to be fed to the hens – might be reached after two weeks, ideally they would be fed just before that, according to Better Origin.

A new batch of larvae is then delivered to the farm to maintain a continuous supply for the 16,000 Bovan Browns and 16,000 Lohmann Browns.

Scientists at the UN’s Food and Agriculture Organisation have concluded that insects grown on waste food contain the necessary nutrients, especially protein, to replace between 25% and 100% of soya meal for chickens.

Soya is the largest contributor to emissions on a free-range egg farm, typically making up more than 85% of an egg’s carbon footprint.

In contrast, huge numbers of larvae can be grown locally to the unit, cutting transport times. They also need much less water, land and energy to produce the same amount of feed as soya meal.

Mr Williams’ hopes that switching to feeding some insect-based protein will cut the dependency on soya in the future.

He is hosting the insect farm as a trial for Better Origin and currently feeds only 25kg/day of the larvae in his 32,000-bird system. 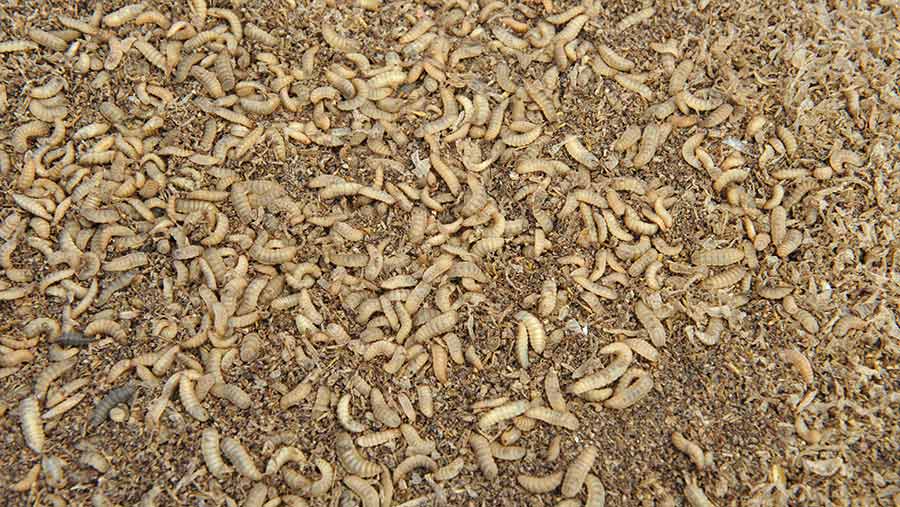 The larvae are rich in protein and essential micronutrients © Debbie James

But he says the maggots are helping to enrich the hens’ diet; they are rich in protein and essential micronutrients.

“We give 3.8t/day of feed, so larvae are never going to replace that, but they are definitely providing enrichment and we will be increasing the quantity fed as the trial progresses,” says Mr Williams, who sells his eggs to Lloyds.

Feeding larvae also enriches the hens’ environment by stimulating natural behaviour. Larvae are collected in buckets from the unit each day, and fed by hand to the hens.

“The chickens get very excited when they see me arriving with the buckets of maggots,” says Mr Williams.

Mr Fotiadis explains that hens love the larvae because insects have been a part of a hen’s natural diet for thousands of years.

The welfare and environmental benefits from feeding maggots are clear, and there are economic ones too.

Supplementing diets with live insects will result in birds producing more eggs, trials run by the company and the University of Bristol have shown. 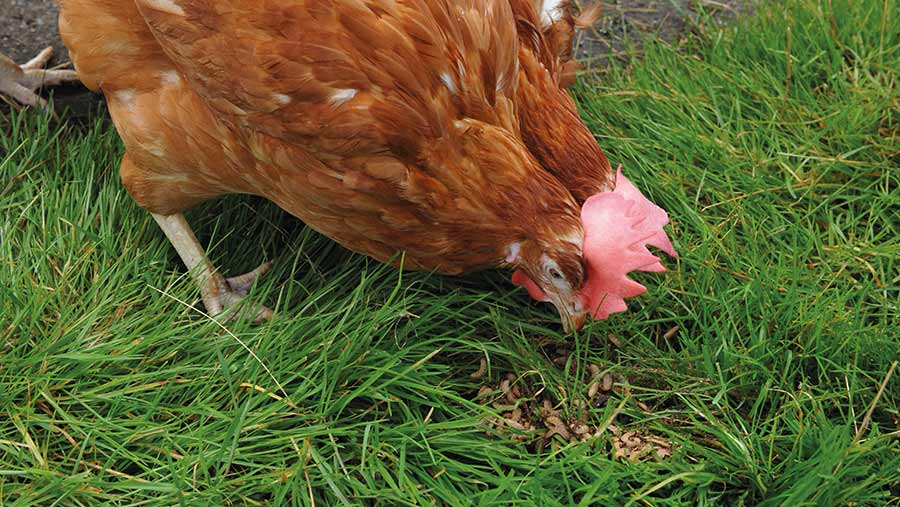 The reduction in “seconds” observed in the company’s trials is most likely linked to the behaviour of hens when they are fed live insects in the sheds.

“It seems you can train hens not to lay where they forage for insects,” says Mr Fotiadis.

“Even if the larvae are introduced once a day, the hens often forage for hours more, which makes it harder to see the scratch yard as a suitable nesting area.”

The company has also tracked a 3% increase in shell strength because the maggots are a rich source of calcium.

Since launching the X1 in 2020, Better Origin has supplied the containers to operate under commercial partnerships.

The company doesn’t sell the systems, but deploys and operates them remotely, Fotis Fotiadis of Better Origin explains.

“The farmer pays a monthly subscription that covers the delivery of larvae, software, and Better Origin remote support and maintenance,” he says.

The price for this service depends on the size of the system and of the farm, while the running cost will depend on the feedstock used.

The other associated running costs are the power required – approximately 30kW a day – and water, between 20 and 200 litres/day, again depending on the liquid fraction of the feedstock.

“Once we factor in the welfare and sustainability benefits, insect feed presents itself as a great alternative to conventional feeds, especially soy,” says Mr Fotiadis.

The feeding and health of the larvae are continuously monitored by Overmind, Better Origin’s artificial intelligence system.

The type of feedstock used dictates how much it costs to produce 1kg of larvae.

But the intention is not to completely replace traditional feeds – the larvae are enhancing the diet and taking the pressure off traditional sources of protein meal, says Mr Fotiadis.

“By feeding live larvae using the Better Origin system, farmers can see a profit increase of up to £1 a hen over its lifetime,” he claims.

This figure is based on the costs associated with feeding the larvae, weighed up against the benefits from improved shell strength and quality and bird health.