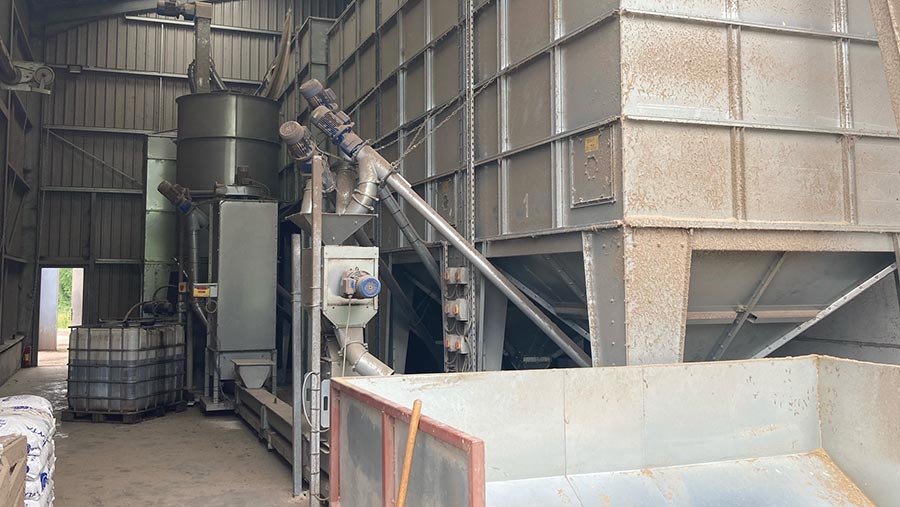 Milling grain from home-grown wheat and oats as feed for their 64,000 layers is making Allan and Nick Panniers’ free-range egg business more sustainable.

Until 2016, they bought their feed from the same livestock feed processor they sold their wheat to.

“The grain was being carted 65 miles from the farm to the mill and then we had a lorry delivering the feed; two journeys. It made sense to mill the grain ourselves, to halve that mileage,” says Nick.

See also: Why home-mix rations are making a comeback on poultry farms

Increasing the sustainability of their eggs required a fairly significant outlay in a Buschhoff static mill – at 2016 prices it cost about £95,000.

The farm already had a shed suitable for siting the mill, so there was no expenditure needed for a building.

Five years on, and the return on that investment is coming from lower feed costs and better flock performance resulting from a consistent ration.

Nick says savings fluctuate due to variations in labour and electricity costs, but he calculates a saving of about 10% compared with bought-in feed. 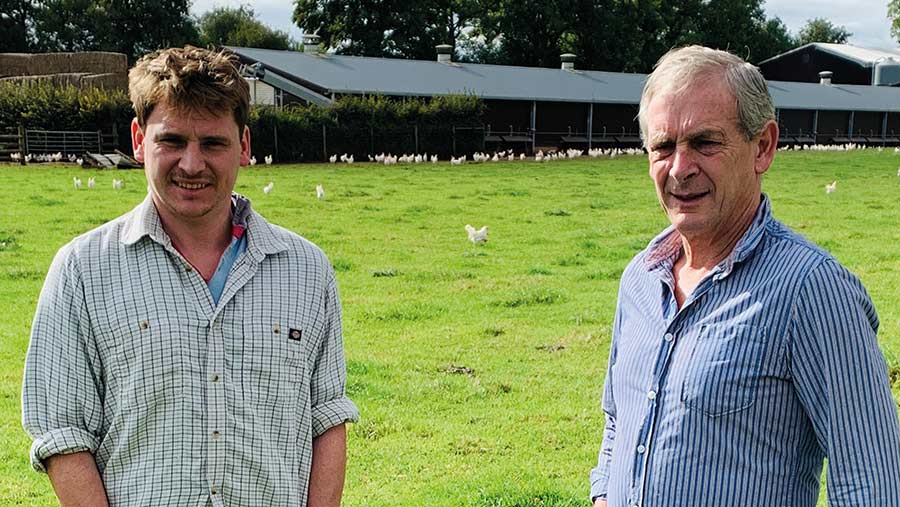 The Panniers grow 162ha of wheat at Wellington Farm, Bishops Frome, Herefordshire, and use about 1,500t of that grain in their poultry enterprise, with the rest going for feed for their suckler beef herd.

Home-grown oats are also included in the ration and that acreage varies from year to year according to the rotation.

The ration is kept simple – the grain is combined with a high-quality feed balancer supplied by Lloyds to produce about 2,800t/year of poultry feed.

The feed is processed once a week and the system can be left to run on its own, thanks to a smartphone app that allows the mill to be monitored remotely, and also sends alerts if any problems occur.

The farm has five separate bins for the mixed rations and the feed is blown straight into two of the chicken sheds. A blower lorry is used for the two sheds that are further away.

While he says there is nothing wrong with the quality of bought-in feed, he believes the farm produces a more consistent product due to the tighter control of ingredients that go into it.

“Milling your own feed is not difficult providing you have good-quality grain,” says Nick.

But he suggests milling and mixing only make economic sense on farms that grow their own cereals.

“If we didn’t have our own wheat, I think we would probably buy in feed because the carbon footprint advantage from the mileage saving wouldn’t be there,” he explains.

The grain is tested every 12 weeks against target specification requirements.

Finished feed analysis is also scrutinised to ensure it is at the correct specification – a policy that pays off.

For instance, after harvest, wheat samples had protein that was above the expected level, so the balancer was tweaked to take account of that result.

This made sure that the Dekalb White birds were not oversupplied with crude protein, and the amino acid profile stayed in line with target levels.

The Panniers are among a growing number of farmers taking the home-milling route.

BW Feeds, which supplies static mills, has seen interest double in on-farm milling options over the past five years.

Managing director Jim Farquharson says there are multiple reasons, from financial and environmental to flexibility and feed quality.

As margins are squeezed, poultry producers are increasingly scrutinising their costs to look for cuts, he says.

Farm size and feed tonnages influence the cost reductions that are possible from home milling, but Mr Farquharson says savings of up to £30/t are achievable.

The sensitivity of flocks to feed quality and changes in formulations is another reason why farmers make the switch.

“On-farm milling allows farmers to have full control of both the feed components and formulation,” he adds.

Feed can also be adapted easily to match a flock’s nutritional requirements throughout its laying cycle.

Some producers might take the opportunity to split day and night feeds to better match the calcium requirements of the birds for shell production.

The system also reduces feed and food miles by using either home-grown or locally sourced primary components such as wheat, barley, peas and beans.

But there are some disadvantages to home milling. Static mills need infrastructure in the form of a building and bins, and they also require power.

Most of the regulatory compliance for operating a static mill can be covered within the British Egg Industry Council’s British Lion Code of Practice if the feed is being produced solely for a farmer’s own flock.

But registration with the local trading standards authority is required.

Mr Farquharson insists this should not be a barrier to on-farm feed production.

“The modern static plants are capable of meeting and exceeding the most demanding of quality standards.”

The appropriate Defra code of practice does not give a specific target for the sampling and testing of feed materials and finished feed for salmonella as it depends on the type of raw materials and the quantity used, but Mr Farquharson says his recommendation is to do this every six months.

Feed is formulated at 18% protein to help birds recover from the stress of transit and to build bodyweight as they come into lay.

Crude protein level reduces to 17% and fibre level increases slightly to 5% to help slow digestion so that faecal matter is drier; calcium is increased to 3.75% as the birds’ rate of lay grows.

The amino acid profile is reduced slightly, for methionine and lysine in particular, to prevent eggs getting too large very quickly.

This diet is 5.5% fibre, combining digestible and non-digestible elements, with supplementary dried lucerne bales used in the housing.

Oats are included at 5% after 35 weeks, increasing to a maximum of 8% later in lay.

Oyster shell and limestone content is increased every 10 weeks to reduce calcium exhaustion in the medullary bone and aid its transfer to the digestive tract.

This diet is lower in lysine and methionine, and calcium is at 4.5% – a level that can be usefully absorbed and digested by the birds. Crude protein is 15.5% and fibre 6%.