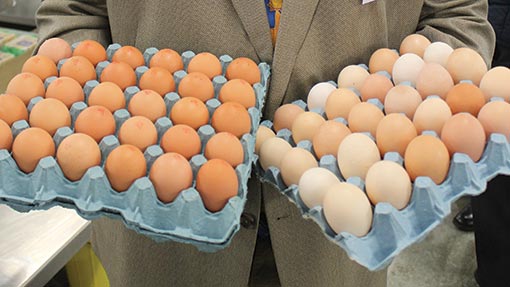 Second-quality eggs are a major drain on producers’ incomes, causing headaches throughout the supply chain.

Between 6% and 8% of shells are broken, with other problems including pale eggs, ridges, distorted shape and even shell-less eggs. So what can farmers do to minimise these losses?

“To understand the causes of seconds, it’s important to know how the reproductive system of the bird works,” says Mount Vets partner Stuart Young. “It takes up an enormous part of the hen and is really quite vulnerable.”

Initially, the oviduct produces the yolk, which travels down the reproductive system to the ampulla, where albumen is secreted. It then passes into the isthmus, where shell membranes are created, before moving into the uterus, where it remains for 20 hours as the hard shell and outer membrane are produced. The egg then passes into the vagina to be laid. “Different abnormalities arise in different parts of the reproductive system,” says Mr Young.

Creating an egg requires a considerable amount of water and calcium, as three-quarters of an egg is water and 5.7g is shell, including 2.5g of calcium. “Over the course of a cycle (300 eggs), a hen requires 1.5kg of calcium.”

Vitamin D must be converted into vitamin D3, so anything affecting liver and kidney function will have a direct impact on shell quality, says Mr Young. “There are lots of different factors which affect shell quality – age, breeding system, genetics, heat, stress, nutrition, and health – and often problems are multi-factorial.”

Nutrition is key, with calcium, phosphorus and magnesium essential to shell production. “You need calcium intake of 3.8-4.2g/day, so anything affecting feed intake – like high energy feed, mycotoxins and hot temperatures – will affect shell quality

“If the birds are panting, they’re releasing carbon dioxide, which reduces the carbonate available for shell formation. They also drink less as they don’t like warm water, which in turn reduces feed intake – so keep the water cool.”

Rapid calcification of the shell occurs at the end of the day and into the dark period, so increasing the amount of calcium in afternoon feeds, by adding oyster shell, will aid shell formation, he adds. “The form of calcium is important as well – a mixture of large and small limestone will be broken down at different rates in the gizzard, prolonging the release of calcium.”

However, balancing the feed is also important, as too much calcium can damage the kidneys and affect absorption of other important minerals. “If your birds are aggressive due to low sodium, it’s better to feed sodium bicarbonate than sodium chloride, as chloride is very detrimental to shell quality,” says Mr Young. “Check your borehole water too, in case it’s high in chloride ions.”

Small eggs are much stronger than large eggs, so producers should be careful to control egg size, particularly at the end of lay. “But young birds can produce shell-less eggs at the start of lay, so delay maturity by two weeks to allow their shell glands to develop,” he advises.

One of the most important factors affecting shell quality is stress. “Adrenaline from stress affects the oviduct, so eggs are laid before the shell is formed properly – and a single stressful disturbance can impact for several days.” Delayed egg laying can also upset the process.

Diseases leading to shell problems include IB, Newcastle Disease, Mycoplasma synoviae, ILT and ART, he adds. “Anything affecting liver function will affect shell quality, so it’s important to keep on top of all aspects of bird health.”

*The above report is taken from a presentation by Mount Vets partner Stuart Young at Egg-Fest, hosted by Blackdown Hills West Country Eggs and organised by the West Country Layers Association.

Do you know a great poultry farmer who deserves recognition for the way they have developed their farm business?
Enter or nominate today
See more
Share this
Advertisements