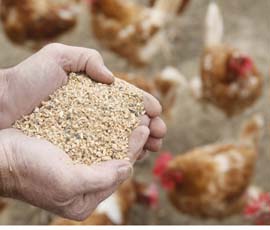 Extracting more money out of retailers to help cover the rising cost of feed for egg producers is a significant challenge.

Competition on the high street is especially tough, Noble Foods farms director Tom Willings told a Business Debate at the Livestock 2012 event at the NEC, Birmingham. Most supermarkets were running promotions on eggs, and the discounters were working herd to increase their market share.

There was also an ongoing shift among consumers to trade down from free range to value eggs. The colony egg market had increased by 20% in the past year, “a complete reversal of the past decade”.

At the same time, feed prices – which account for 60% of egg production costs – had climbed steadily for nine months and were set to remain high.

But when the packers approached the supermarkets to ask for a compensatory price rise, their response was to point to the growing size of the UK laying flock and the fact that they had 40 or more packers to buy from.

“With feed prices on an upward curve, being an egg producer, and in particular a free-range egg producer, is a difficult placed to be.”

Speaking to Poultry World, Mr Willings said there was some potential for a price rise later in the year, given the seasonal pull on supply in the run-up to Christmas, but this was more likely to benefit the cage sector, rather than free range.

Longer term the outlook was positive, he added, with eggs providing with a safe, value for money source of animal protein.

He also anticipated that the last conventional cages would be decommissioned in mainland Europe by the end of the year.

While the failure of some member states to meet the new welfare rules was disappointing, it was better that such production was phased out, rather than taken out in one fell swoop, which would cause a jolt to the market, Mr Willings suggested.