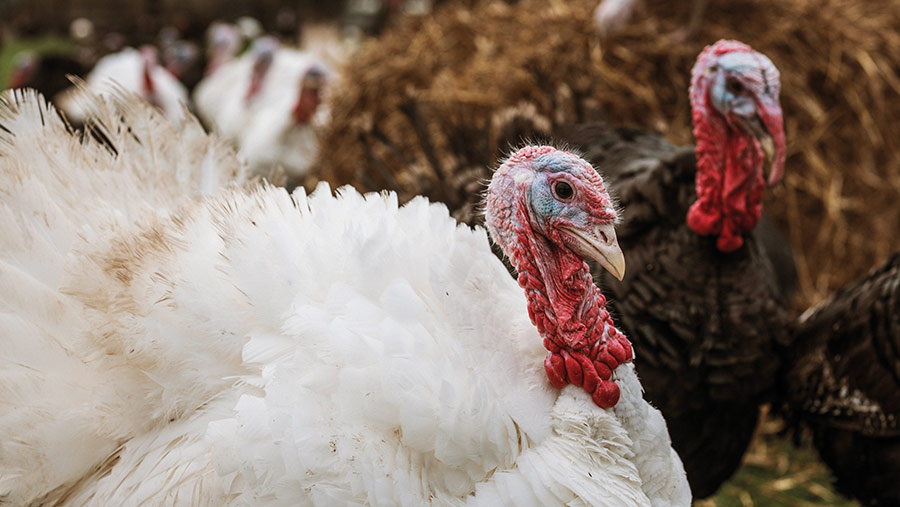 On-farm growers have faced a multitude of challenges this year, of which rising feed costs and access to labour have been the biggest.

At the time they were placing orders for poults in the early summer, there were real concerns about the limited availability of migrant workers and the unsuitability of domestic workers who would be needed to process the birds when they were ready.

See also: What to consider before going into seasonal turkey production

The commercial turkey sector – primarily Bernard Matthews and Avara Foods – took the decision then to cut production by an estimated 10%, prompting newspaper headlines about “Christmas being cancelled”.

But smaller, seasonal growers were also in a tricky position – conscious that demand for local British food has remained resilient throughout the Covid pandemic, but wary of taking on birds that would be expensive to rear and that they might struggle to process.

In the event, however, most stuck with similar poult placings to last year, according to traditional turkey breeder Kelly Turkeys, and their decision appears to have been vindicated.

Commercial producers have stepped up production in recent weeks as more workers have come on stream.

British Poultry Council chief executive Richard Griffiths says placements had been cut back in the summer months in anticipation of a shortage of workers later in the year to process them.

But the introduction of temporary visas from September, and some successes with sourcing local labour, had enabled large-scale operators to step up production of faster-growing birds again, shifting turkeys from year-round supply chains into the seasonal Christmas market.

“The product offering has been streamlined a bit, with processors offering fewer added-value lines and more whole birds and crowns, but the situation has certainly improved,” says Mr Griffiths.

Bernard Matthews boss Ranjit Singh Boparan was able to declare earlier this month that “Christmas is saved”, as he reported the recruitment of 900 extra temporary seasonal workers for his factories, plugging the job gaps at the busiest time of year.

“Everyone should be able to source their Christmas turkey this year, which is great news,” he says.

Following prolonged industry lobbying, the government finally agreed in September to allow up to 5,500 poultry workers into the country on temporary visas, to help plug labour shortages in slaughterhouses and on farms.

By the time the scheme closed on 15 November, it is estimated that about 3,000 visas had been allocated and those overseas workers are now taking up their places.

“For many smaller operators, the extra one or two pairs of hands has made all the difference,” says Richard Griffiths, chief executive of the British Poultry Council, who is confident that Christmas demand will be met.

But there is no doubt the cost of labour has gone up considerably, which will take a toll on margins.

“The labour market is very tight,” says NFU poultry adviser Tom Glen. “While it was good that the temporary visa scheme was available to small producers as well as large, it did come very late in the day and has added cost.

“Producers are also having to pay more, both to retain staff or attract new staff. It’s a competitive workplace. Many local workers do not want temporary jobs anyway, poor rural transport makes it hard for some to get to farms, and there is not the time to train them in the skills required.”

As well as paying more for labour, feed costs have been another challenge, with feed grains on an upward trajectory for much of the year.

Feed wheat, for example, has been hovering around the £200/t mark for much of the year, and is currently £30-40/t ahead of year-ago levels – and rising.

Costs will undoubtedly have risen since then too, with energy and packaging also more expensive – and those August estimates did not include the cost of visa applications for those using the government’s temporary visa scheme.

But the effect on margins will vary hugely between individual farm businesses, says Mr Glen.

“If they booked feed late, had to source more local labour, or had to use the visa scheme, they may well be looking at even greater cost rises, and margins will be under pressure – but it will vary.”

Mr Glen is, however, optimistic about overall prospects for the sector, and anticipating a sell-out.

“We already saw some panic-buying in October, when there was talk of a shortage. There is little doubt that many families will want to make Christmas extra special this year and will pay a little bit more for that quality British product.”

Seasonal turkey producer Anthony Harris says he is close to selling out, having enjoyed a surge in orders in October as customers looked to secure their birds for Christmas.

But finding the labour to kill and prepare the 3,000 white and bronze birds he keeps at Bridgers Farm, near Hurstpierpoint, West Sussex, has been especially challenging – and expensive.

“We normally employ eight Polish regulars to do the slaughtering and butchering, but only four have settled status, so we’ve had to use the temporary visa scheme,” says Mr Harris.

“Through this, we have managed to secure another two workers – one who has been here before and one new one. 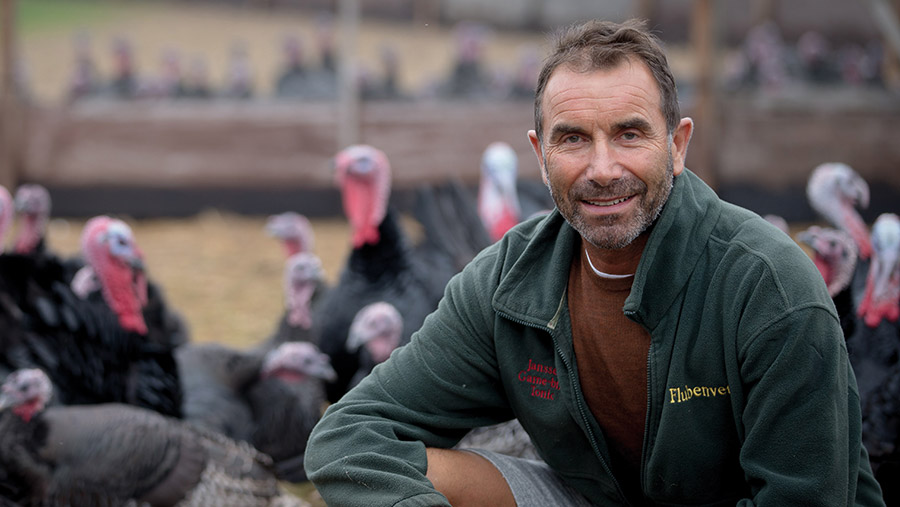 “It has worked out quite expensive,” he adds. “As well as the visa charge of £240 each, the administration fees associated with recruiting through one of the four approved labour providers has put the cost up to about £1,500.

“For three weeks’ work and for a small business like mine, that’s a lot of money.”

Mr Harris has also managed to retain a regular English worker to do the stunning, and found three locals to help with weighing, boxing and book-keeping.

“We’ve had some interest from local people, but you have to be very selective to make sure the ones you employ will last the course – it can be hard work.”

To make this more likely, Mr Harris has put his hourly rates up from about £12 last year, to £13.

Killing will start on 1 December, with the team processing 350-600 birds a day.

“It generally takes us eight days to kill and dry-pluck, then they hang for 14 days, and another six days to do the oven-readying.”

Overall, Mr Harris says he is looking at a significant cost increase this year, having paid 8% more for his feed and 11% more for labour.

“I was a little later than I should have been with fixing my feed [supplied by Duffields], and we are also anticipating having to run our chillers harder this year – it seems a long time since we had a cold December.”

To offset this, Mr Harris has introduced a 7% across-the-board price increase on the birds he sells direct from the farm, though the butchers’ trade – which takes about one-third of his birds – remains very competitive, with boneless breasts from Poland coming in at rock-bottom prices.

“At least retail demand is strong, and sales to farm shops are also growing,” he says. “Last year we sold out two weeks before Christmas, with Covid helping as nobody was taking holidays abroad. I expect it will be the same this year.”

Hampshire farmers Simon and Alex Bridger will be operating a Covid-safe drive-through turkey collection service for the second Christmas running at their Ashford Farm, in Petersfield.

The Bridgers started the service last year to keep staff and customers safe during the Covid-19 pandemic, rather than selling through the existing shop. It was so successful, they have decided to run it again.

The pandemic has seen more people looking to buy local and support farmers, says Mrs Bridger, with the traceability of the meat the biggest selling point. “Last year we were swamped, and it looks as though we will be again this year due to panic-buying.” 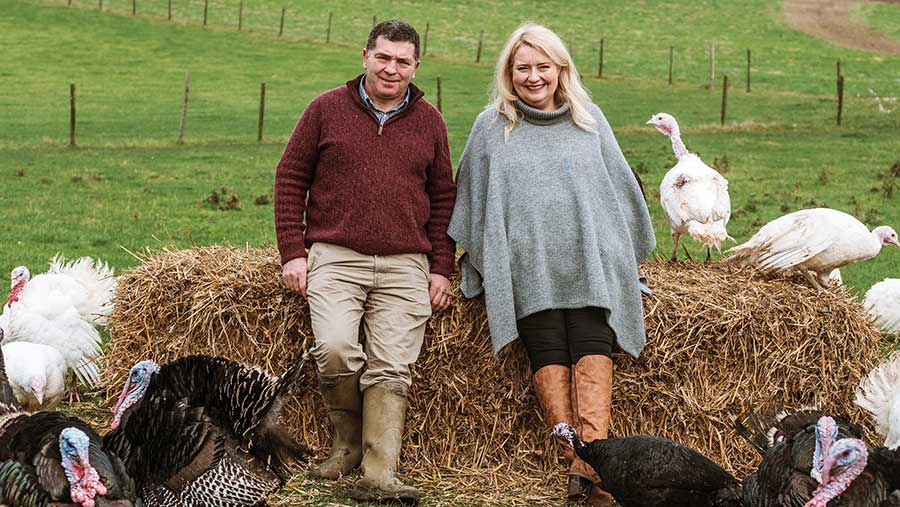 This season, some 1,250 turkeys have been reared on farm – two-thirds bronzes, a third whites, plus 50 Norfolk Blacks.

From 30 November, about 4,000 birds will be processed by 20 workers – all dry-plucked and hung for a minimum of 10 days to intensify the flavour.

“We’ve been gaining new customers since Covid and are a month ahead on sales,” says Mr Tanner. “Customers have been ordering their turkeys early, fearing they won’t get one. We’re hoping for a good year. Only time will tell.”