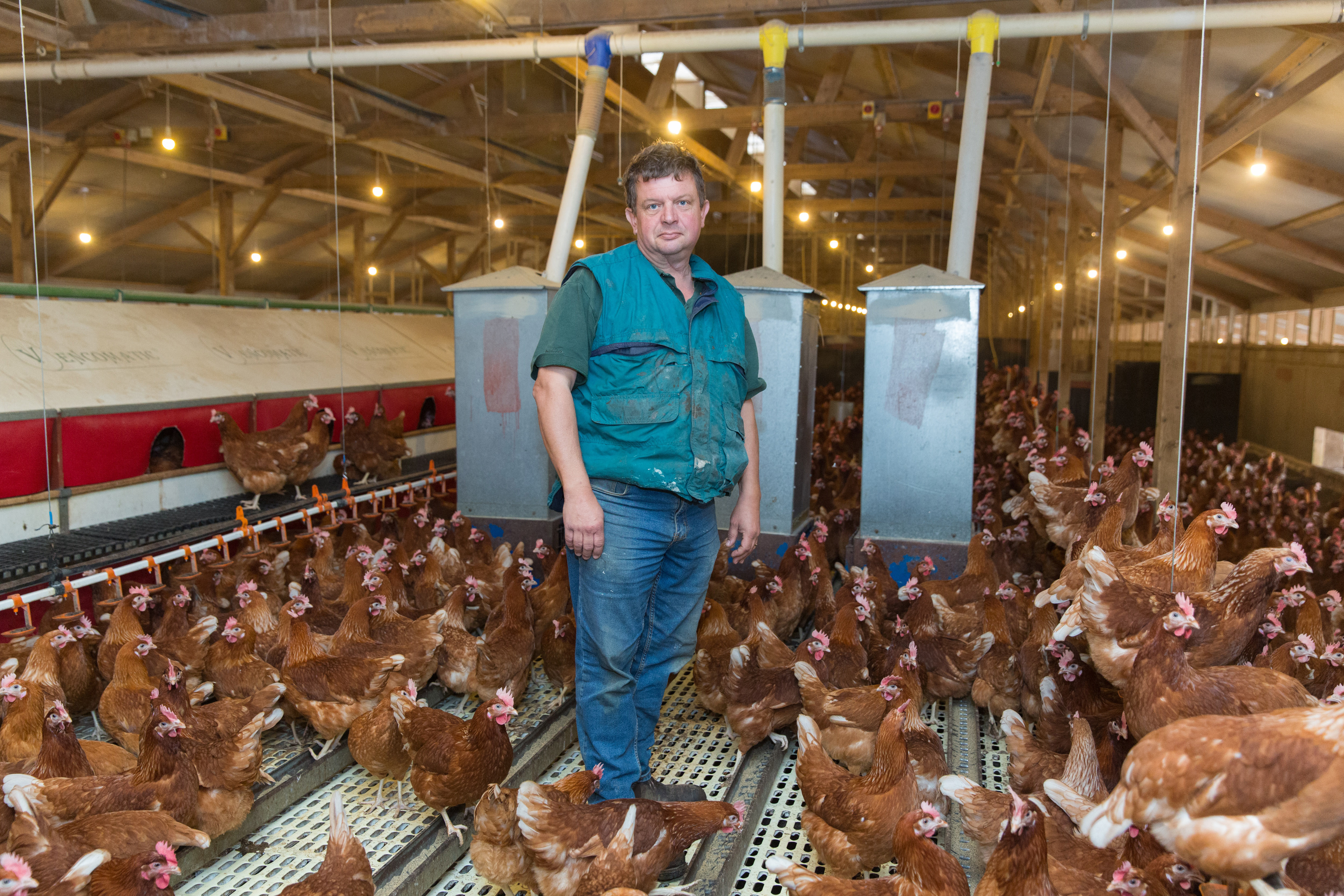 Eggs numbers up and fewer seconds

Mr Leigh, who farms at Littledale, near Lancaster, said production levels were 3%-4% higher since he began using Exzolt.

“Not only are egg numbers up but there are definitely fewer seconds. The eggs seem to be browner and we seem to be getting few double-yokes.

“I’ve been involved in the business for 30-40 years and I’ve definitely seen a difference in shell quality and possibly egg size,” he told Poultry World.

Mr Leigh, who supplies eggs to the Lakes’ Free Range Egg Company, said there was also a difference in bird welfare with lower feather-pecking related to the mites.

Pullets are reared in a range of buildings – a converted barn, some older wooden sheds and a 2-storey building. Due to disinfection after each crop there is not too much build-up of the disease but the pullets that are onward reared have been treated with Exzolt.

The treatment is administered through the drinking water in 2 separate treatments, 7 days apart. The dose is calculated on the flocks’ bodyweight.

The active ingredient, fluralaner, is absorbed by the gut and enters the bloodstream after a few hours. By 36 hours the concentration of fluralaner maximises potency in the bird’s blood.

The red mite’s nervous system initially becomes affected after a blood meal from a treated bird and death of the mite occurs soon afterwards. At present, the kill rate in trials is 99%.

Some producers have been taken aback by the costs of the product, but Mr Leigh urged producers to try it.

“My advice would be to make sure you dose enough and don’t under-dose. Keep good biosecurity to make sure there is no reinfection.”

He said that taking into account extra production and feed conversion rate he believes there have been benefits of 2.5:1 when using the product.

Mr Perowne, manages just over 11,000 free-range birds and said he spent £1,800 on two litres of Exzolt that was given to his flock of Bovan Browns.

Mr Perowne said that while the outlay would appear at first to be high, it was important to consider other factors.

“It is a very simple product to use and it took two one-hour sessions to apply. When you consider the cost, for example, of spraying a unit in the middle of the night, which takes a number of hours and if you are using outside contractors would cost at least £50/hour, you can see some of the advantages.

“We needed to make sure we were giving the birds the correct dose. We thought they were weighing in at 1,800g but actually were 1,850g and so needed to give them a little more.

“We have used two litres and there is a drop in the bottom left,” he said.

Mr Perowne has noticed a real difference in both productivity and egg quality since the treatment in the middle of September.

“The birds are now 56 weeks old and are laying at 91%. I’ve seen an improvement both in rate of laying but also the egg weight has also increased by 1.5g.

“The quality of the eggs has improved too. There are fewer seconds and the visible look of the egg has improved. I’ve got Bovan Browns which are not renowned for having a nice brown shell, but the shell has become a shade darker.

“The eggs have less markings and there are certainly fewer seconds,” he added.

While a firm supporter of the product, Mr Perowne said he was also keen to use red mite traps to find out where the mites were based.

“They weren’t where we expected to find them – they were underneath the slats – which was a surprise to me and I’ve been involved in poultry farming for 30 years.”

He is relieved not to have to use sprays but warned farmers to be careful, noting the recent saga of the Round Up glyphosate, which has been the subject of intense debate due to environmental concerns.