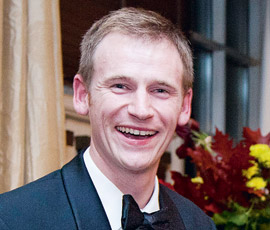 Are you under 40, dynamic and making an impact on your business or the egg and poultry industry in general? Or do you know somebody who is? If so, the organisers of the Egg and Poultry Industry Conference (EPIC) want to hear from you.

The award is being made annually in memory of Clive Frampton, former owner of Frampton’s egg processing business, who passed away in 2012.

Mr Davies was chosen as the winner in recognition of his achievements within the family business, helping to secure IPPC approval and getting involved with Harper Adams University College to train other young people in colony egg production.

The search is now on for people with similar credentials. Candidates for this year’s trophy, who must be under 40 but may come from any part of the egg and poultry supply chain, will be assessed on the following criteria:

The award will be presented at the banquet at this year’s EPIC, being held at the Forest of Arden Hotel on 3 and 4 November. The winner will be invited to attend the conference and the banquet as a guest of the committee, with all accommodation paid for.

If you wish to enter or make a nomination, please contact any of the following by Monday 30 September, stating in up to 500 words why the candidate deserves the award: