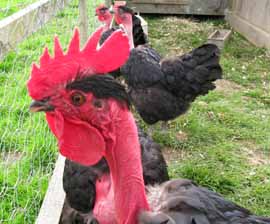 Researchers at the University of Edinburgh have discovered the physical reasons behind the strange appearance of the Transylvanian naked-neck chicken, know as a Churkey or a Turken because of its resemblance to a turkey.

After collecting and analysing DNA samples from birds in Mexico, France and Hungary, the scientists identified a complex genetic mutation which causes the skin on the birds to neck to produce a vitamin A-derived protein, inhibiting feather growth.

Transylvanian naked necks are believed to have come from the north of Romania and have been around for hundreds of years, being introduced to Britain only in the 1920s.

“Not only does this help our understanding of developmental biology and give insight into how different breeds have evolved, but it could have practical implications for helping poultry production in hot countries, including those in the developing world.” Dr Denis Headon, who led the research at the Roslin Institute, said.

Scientists at the Roslin Institute, working with the University of Cambridge, also recently developed the first GM chicken which is unable to transmit the avian influenza virus (H5N1) to other birds.

The research into the Transylvanian naked-neck chicken will be published in the next edition of the Public Library of Science Journal and was funded by the Biotechnology and Biological Sciences Research Council.