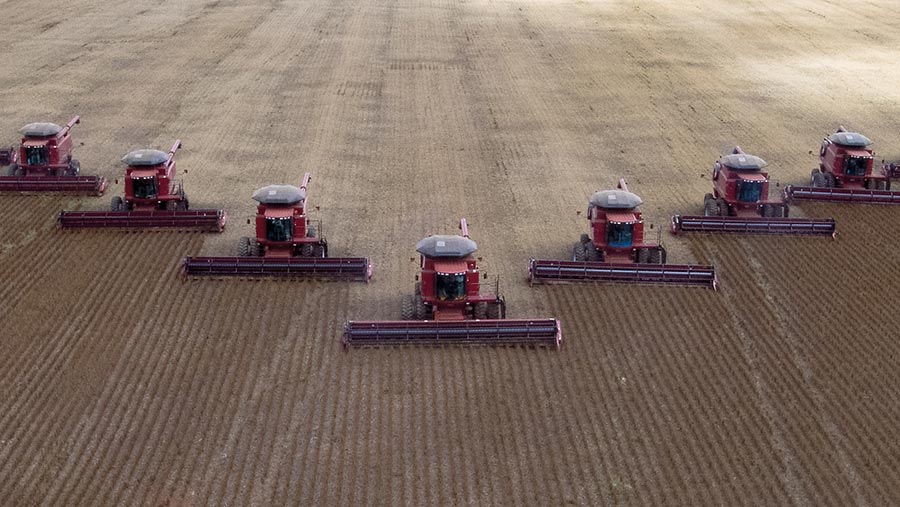 Soya is almost unique in its qualities as a source of highly digestible, high-protein, plant-based feed with a good amino acid profile.

It is also available year round and is generally a consistent product, giving feed formulators a reliable basis to underpin the best diets possible.

Its high value in both pig and poultry diets means research into formulations over the years has primarily focused on soya-based rations.

But that is changing as retailers, non-governmental organisations (NGOs) and the wider public scrutinise where their poultrymeat and eggs come from and which feed ingredients have been used to produce them.

The case against soya

Britain imports 3.2m tonnes of soya a year, and more than two thirds (68%) of it comes from South America.

The potential environmental issues associated with crops from the soya-growing regions on the continent include massive deforestation and long shipping journeys to reach the UK, often via Rotterdam.

This makes soya a key contributor to the carbon footprint of the poultry sector. One recent report suggested that up to 90% of emissions associated with egg production could be attributed to feed, depending on how it was sourced.

And it is not just a question of sustainability. The price of soya has also exceeded £420/t this year, throwing up questions of its long-term viability as a cost-effective ration.

Part of the problem is that soya has proven so effective over the years that many of the potential alternatives are in their relative infancy in terms of their use in commercial diets.

Some of the potential protein sources being explored are:

Some of the alternatives face legislative barriers – notably meat and bonemeal, use of which has been tightly controlled since the BSE crisis in cattle.

Others such as algae-based protein sources represent technology that is still under development.

But legumes do represent a good opportunity, as two recent trials suggest.

As well as having potential as a protein replacement for livestock, as they grow legumes fix nitrogen, reducing the dependency on fertiliser.

They are high in fibre, but a key issue is that they naturally contain high levels of alkaloids, which impart a bitter taste to the crop – although sweet lupins have tolerable levels.

Crop producer Frontier Agriculture was exploring lupins as an alternative break crop to rapeseed in Kent, and the firm approached ABN to see if it was interested in the harvest.

The two varieties trialled were Boregine and Dieta. The first step was to confirm the raw material matrix of the UK-grown crops (see table).

Next, a North Yorkshire farm was recruited, with six poultry sheds housing 43,500 Ross 308 birds in each.

One crop supplemented soya with Boregine and one with Dieta, and both had sheds fed conventional diets as controls.

The experimental diets were designed with minimal lupins (see “Lupins in rations”), with the content increasing as the birds aged.

“It was a lot easier to put lupins into the later diets than it was in the earlier ones,” explains Mr Kenyon.

In addition to standard performance measures, litter quality and foot-pads were evaluated, he adds. “If the digestibility of the lupins was lower, we could have expected the litter quality to go off, and there to be consequences for litter use and foot-pad scores.”

Trial results showed no significant differences in the performance of birds in either the experimental crops or the control. The farmer also raised no welfare issues, palatability problems or litter concerns.

Mr Kenyon says: “If we took the average lupin performance and applied it to all 261,000 birds on the farm, it would reduce total soya use by 29t of soya per crop, or 2.8%. Not an insignificant change,”

Jos Houdijk is head of the SRUC’s monogastric science research centre and has been examining fava beans as a supplement or replacement for soya in broiler diets.

He recently conducted trials where a phase-one starter feed with 20% fava beans was fed to broiler chicks to assess its viability as a protein source in young birds.

“The outcomes were not necessarily so positive,” he explains. “Weight gain, feed intake and feed conversion were all negatively affected.”

Another trial with a 5% inclusion ratio again showed that performance was lower.

Chicks have a higher sensitivity to anti-nutritional factors, he says, which could have been a factor in the poorer performance.

The following trial looked at fava beans in grower and finisher diets. Results suggested that in those diets, birds were able to cope with a 15% inclusion of fava beans.

Prof Houdijk says the next step is to examine how birds respond to a health challenge while eating the fava bean-supplemented diets.

As both trials indicate, there are challenges to replacing soya with alternative legumes. Both Prof Houdijk and Mr Kenyon believe that further improvements could come from: