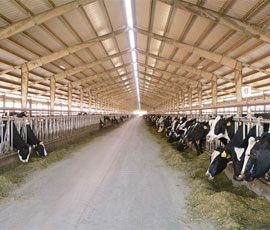 Eliminating farm bottlenecks and preventing transition cow problems were just some of the topics discussed at this week’s Large Herd Seminar in Gloucestershire.

Only by identifying and addressing farm bottlenecks will you be able to maximise dairy herd performance. That was the message from USA dairy farmer Gordie Jones (pictured), partner of Central Sands Dairy in Wisconsin. He said bottlenecks were a “rate limiting problem.”

“You need to have a meaningful conversation with your dairyman and find the rate limiting factors on your farm. Identify them, open them up and then repeat the process.”

Speaking about the challenges of expansion, Dr Jones said many of the bottlenecks he identified on new units related to specific areas.

“65% involve fresh and dry cow management, feed and cow comfort. A cow should stand to eat, drink and milk and should lay down the rest of the time.”

He said there was a need for farmers to think differently during expansion, as increased cow numbers added challenges when trying to understand the way a dairy ran.

“Ask yourself what happens in 24 hours for a cow. When’s feed delivered, when does she get milked, how long is she in the parlour?

“You get four hours maximum to mess around with a cow that’s not eating, drinking or going to bed. Any longer than this costs you milk. 20 hours of the day has to be hers.”

Dr Jones believed the single biggest mistake any dairy farmer could make was not putting food in front of animals on exit from parlour. “If you don’t have more than 50% of her dry matter intake at one presented feed your best cow may not get her full meal before she lays down.”

He recommended farmers use the calving pen as a good point of reference. “Go to your maternity pen and ask how she gets back here again. Look at group changes, ration changes, voluntary waiting period and dry period length – which should be 45 days at least.

“Then look at two years – how does heifer junior get back to the maternity pen?”

Dr Jones highlighted three “circles of life”; one day, one year and two years. “As you look at expanding, look at how you’re going to make these three circles work,” he said.

Protocols also have a significant role to play in ensuring everyone on farm is happy and understands their role.

When building a dairy he also highlighted the ABC of building design; Air, Bunk and Cow comfort. “The feed bunk is the key place to look for bottlenecks. 56% of variation in milk yield is due to non-dietary factors like feed push-up or refusals,” he said.

One high yielding Scottish herd is culling out some animals of low genetic merit for milk production to reduce the likelihood of metabolic disease post-calving.

Following the death of a cow five days after calving, Meldrum Farm, Glasgow, identified a herd problem with cows entering the dry period over conditioned, predisposing them to weight loss and ketosis.

Routine monitoring of cow condition and blood NEFA and ketone levels allowed the unit to closely assess where problems were occurring and implement a control strategy.

Glasgow University’s Tim Geraghty, who is part of the monitoring team working at David Hamilton’s farm, explained how less than half of cows were entering the dry period with a target Body Condition Sscore of three.

“There was a trend of cows losing weight in the dry cow pen. We found two-thirds of fat cows were losing weight, compared with less than a third of cows entering the dry period on target .”

Further analysis found fat cows had more than double the risk of developing a transition cow problem. Older cows, and low yielders were also more likely to dry off fat.

In the short term they looked at increasing energy in the dry cow diet, and targeting propylene glycol to fat cows prior to calving. Running two milking rations or a weight loss group was unpopular so they looked at breeding.

“We looked at genetic merit for milk and found 50% of the lowest quartile were coming in fat.”

As a result, the farm decided to breed the lowest genetic merit cows to beef sooner. “Now we put genetic merit much higher on the cull list, along with mastitis and lameness,” says Mr Geraghty.

“Our breeding protocols have become flexible. If you’re a low genetic merit cow, you won’t get bred again.”

You can read more from the Large Herd Seminar in next months Dairy Update. Sign up for your free copy.