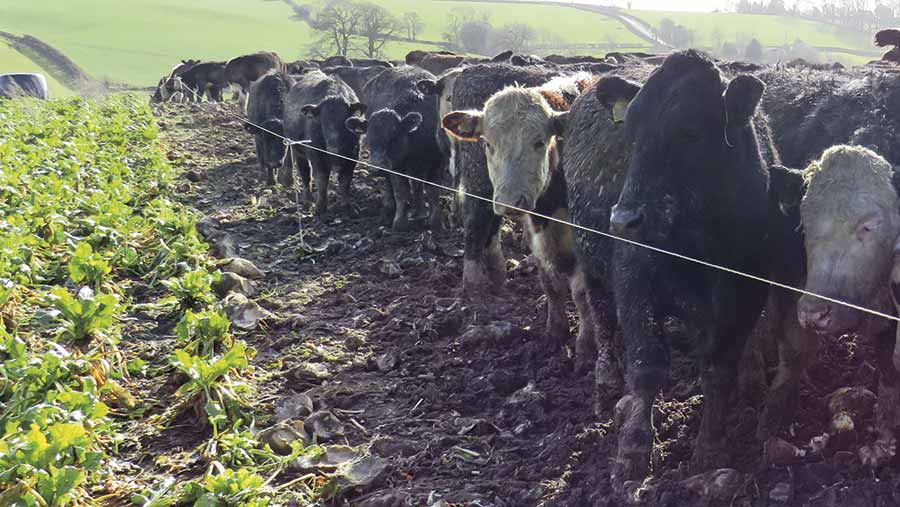 Seed priming is now available in some varieties of fodder beet. But what is it and how can it benefit livestock systems that are out wintering stock?

We speak to Mark Sheridan from seed supplier Field Options, to get the lowdown on the costs, benefits and establishment and growing tips.

We also speak to beef and sheep farmer Marc Jones, who has used prime seed for the first time last year, to find out what he thinks.

What is primed seed?

Priming the seed involves a process of pre-germination, drying and pelleting. Drilling earlier than April increases the risk of bolting and it’s important to avoid frosts. It accelerates establishment and results in a more even crop, which is beneficial whether lifting or grazing.

What sites does it suit best and can it help less favourable ones?

See also: The benefits of fodder beet and how to get the best from it

Does it cost more than conventional seed?

Must you use any specialist establishment or growing practices?

Exactly the same as standard fodder beet and the crop will tend to be more tolerant of pests and diseases.

A specialist fertiliser including salt is also crucial for fodder beet, so this should be applied at the time of sowing. Control of grass weeds is important, and is easier for fodder beet than for brassicas, for example, due the available chemistry.

Varieties should be selected with ramularia resistance as a key requirement, with a fungicide programme tailored accordingly.

Is it available for organic farms?

Advice for out-wintering on fodder beet

Beef farmer Marc Jones has gained an additional one tonne per hectare of dry matter in his first year of experimenting with primed fodder beet seed.

Fodder beet grown from primed seed was also three weeks ahead in growth and had minimal disease compared to the same variety unprimed, which suffered extensive leaf loss.

Mr Jones rears 300 cattle from weaning to finishing at around 20 months and out-winters cattle on fodder beet as part of the farm’s goal to produce as much as possible from resources on the farm and cut bought-in feed costs.

Angus and Hereford cross steer and heifer calves are bought in September or October. These are then reared inside on milk powder and ad-lib cake up to 120kg liveweight.

They then go onto silage to prepare them for their first spring and summer grazing. The cattle are introduced to the fodder beet at 14 months old, when they are no less than 250kg liveweight.

The aim is to finish the steers at 600kg liveweight and heifers at 550-570kg liveweight by May or June, with the Angus’ averaging 0+ on the EUROP scale.

“This year we used both primed and unprimed fodder beet seed. The primed seed cost an extra £10 per acre, but we feel this is justified as it yielded an additional tonne of dry matter per hectare,” explains Mr Jones.

During the transition period the cattle typically grow at 0.70kg/day. However, once fully transitioned onto the fodder beet, they average 0.75-0.80kg DLWG.”

The out-wintering ration is typically around two-thirds fodder beet at 15% dry matter, and one-third grass silage at 50-60% dry matter with the total cost of out-wintering costing £80-90 per head – around half the cost if they were housed.

“We move 100 of the top performing cattle off the field early to allow lighter animals to utilise more of the crop,” adds Mr Jones.