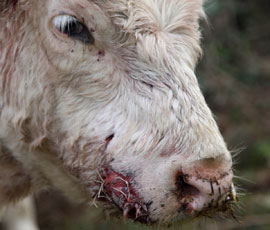 A dairy farmer has told of her horror after two pitbull-type dogs attacked and injured her three rare breed cows.

Karen Wall, owner of Trenow Cove Dairy in Perranuthnoe, near Penzance said the attack left a scene of “carnage” with “blood everywhere”.

It only ended when her farming husband, Nick, shot and killed one of the dogs with a 12-bore shotgun. The second dog escaped.

The Whitebred Shorthorn heifers were attacked in a private field on Tuesday evening (20 March).

The Rarebreed Survival Trust said Whitebred Shorthorns are an endangered species of cattle that are on its critical list, with less than 150 breeding females left worldwide.

“She had a hole in the right side of her face. There was a flap of flesh about the size of an envelope dangling down towards the ground and the dog was chewing and eating it. The cow was in absolute agony,” she said, fighting back tears. 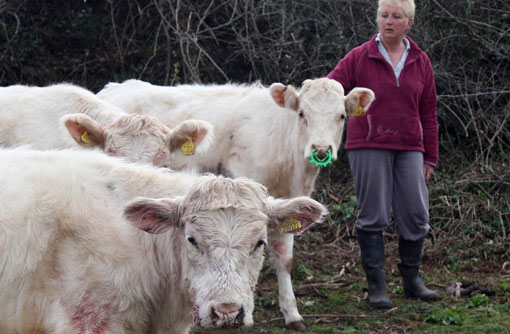 The bites and injuries to the heifer’s head required 40 stitches in a 90-minute operation, she added. Vets have also administered antibiotics to Guinevere, the first of the breed to be born in Cornwall.

The two other cows, Primrose and Daisy were both treated for various cuts and given antibiotics.

“Daisy is our milking cow and her milk yield has gone down by about half,” said Mrs Wall. “I’m barely seeing six litres a day when she should be at peak delivery.”

Mrs Wall defended her husband’s actions and said he had no choice but to shoot the dog.

“The dog was lunging and if he hadn’t shot it, our cows could easily have been killed,” she said.

Devon and Cornwall Police is investigating the incident.

A force spokesman said: “We are carrying out a full investigation into the incident. There have been no arrests.”