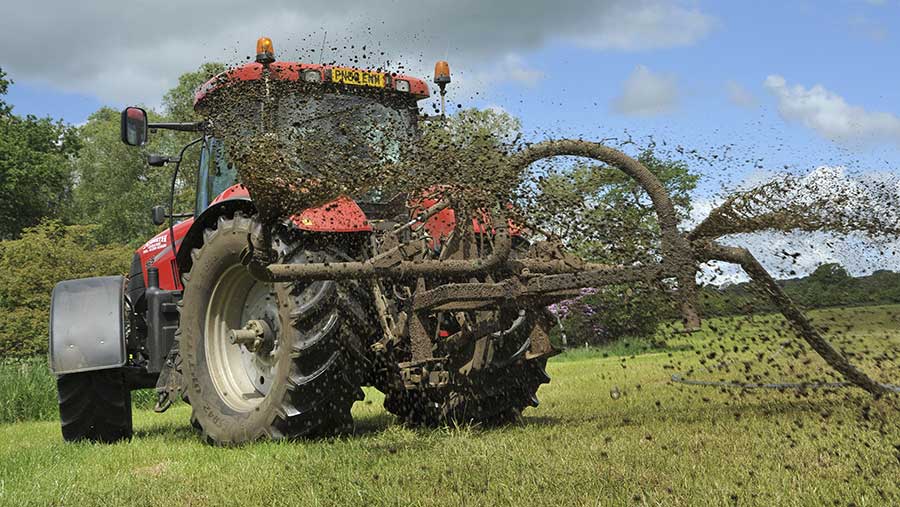 Dr Marsh-Smith said: “If we added 2-3p/litre to the farmgate milk price and paid dairy farmers properly, they would not have these huge pressures. Consumers wouldn’t baulk at this at all.

“It would mean farmers could invest in proper slurry storage systems. Several companies are also working on slurry processing units which go farm to farm, which farmers could take advantage of.”

Following a wet autumn, many parts of Wales have experienced further persistent wet weather this winter, leaving fields saturated and increasing the risk of nitrate pollution from slurry spreading.

“We have had some dry periods, but at the end of the day, phosphate and nitrogen is getting into water and it’s not good for health and the environment,” added Dr Marsh-Smith. “The majority of farmers are ‘playing the game’, but when 5% are not, voluntary measures don’t work.”

Rural affairs secretary Lesley Griffiths hinted that the government would adopt a flexible approach to NVZ regulation to cut river pollution by working with stakeholders to get the “right balance of regulatory measures, voluntary initiatives and investment”.

It claimed that a significant number of holdings discharge raw slurry directly into rivers and streams. “Sadly, there are no fish left to die in many places and so reporting relies on the few people on the ground to spot the intermittent changes of colour and smell.”

Afonydd Cymru has also made a formal complaint to the European Commission, arguing that dairy, beef and poultry businesses in parts of Wales are invariably breaking EU rules and guidelines on slurry spreading.

Glyn Roberts, president of the Farmers’ Union of Wales (FUW) said: “The group that has made this complaint acknowledges that there are no problems on the overwhelming majority of farms, and that we need to work proactively with farmers to tackle problems where they do exist, and do so in a proportionate way.

“That is exactly the work being undertaken by the Wales Land Management Forum, of which FUW is a member, so it is disappointing that this group has decided to take the steps it has in spite of all the work already under way – especially after acknowledging the problems caused by an incredibly wet six months and that financial pressures on the industry are already acute.

“Of course, an increase in milk prices would be welcome, but even if this did occur it would only benefit the minority of those affected by what Afonydd Cymru appear to be advocating.”

NFU Cymru said farmers need certainty and a fair return from the marketplace to enable them to invest in their businesses.

Deputy president Aled Jones added: “NFU Cymru has committed substantial efforts and resource to work with farmers, government and other stakeholders to enable a framework to take action on water quality, where required.

“The union recently set up a Water Quality Task and Finish Group with the aim of working with partners to secure improvements in water quality in Wales.

“NFU Cymru is clear that one pollution incident is one too many, and farmers are committed to playing their part in the bigger picture in maintaining and enhancing water quality across Wales. Successful outcomes can only be delivered by everyone working in partnership.”