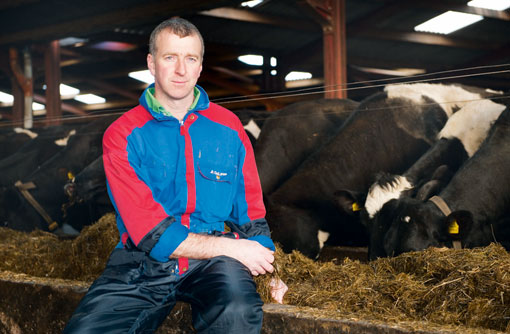 Hello, I farm along with wife Jackie and my parents in what could be described as a reasonably traditional partnership structure. That’s where the traditional bit ends. We calve 350 black and white cows in 12 weeks each spring and from early March we endeavour to get as much grazed grass converted cheaply into milk as we can from the land available, which is currently 160ha.

There is no blueprint at Cairnhead, a certain amount of flexibility is essential and management decisions are normally based on grass availability, grazing conditions and forage requirements for the winter months. Following years’ dreaming I’ve given up trying to make summer longer and winter shorter. Almost all the land we farm is both LFA and SDA, so there’s only so far into the winter cows will graze productively and wilfully. Getting it wrong just makes both cow and man miserable and despondent.

The winter months will see a major overhaul of the cow tracks on the grazing block. A combination of several wet summers and a fair degree of putting off the inevitable has added to the urgency of the situation. The entire milking herd was fully housed on 10 November 2011, which is certainly not the latest for us, but as ground and track conditions worsened there seemed to be a growing sense of the timing being about right for all concerned.

It’s obviously not just the cows and staff that had seen enough of the mud as the following day one of the wheels fell off the quad, so just as well the cows were laid in. Heaven forbid someone actually having to walk round them to get them in.