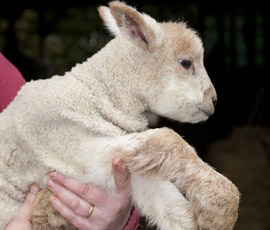 Good progress has been made towards a vaccine to protect livestock against the Schmallenberg virus but the timetable for its commercial introduction remains uncertain, says the UK’s national vaccine regulatory body.

In a departure from its usual approach in regulating vaccines, the Veterinary Medicines Directorate (VMD) said it was assessing an application for a Schmallenberg virus vaccine – Bovilis SBV – submitted by MSD Animal Health.

MSD submitted an application to the VMD for provisional marketing authorisation of the vaccine at the end of August, which is claims has been shown to protect pregnant calves, lambs and ewes from the virus.

The application was validated in mid-September and the VMD completed its initial assessment and sent questions to the company at the end of November. MSD provided responses to the questions at the end of January and these are currently being assessed by the VMD.

But despite the good progress the VMD said it could not comment on reports that a vaccine was nearing authorisation this spring, in time to protect flocks and herds ahead of next season.

“We recognise that the Schmallenberg virus is a really serious disease for farmers and their livestock, which is why we decided it was best to acknowledge the application from MSD and confirm the process we go through in terms of assessing it,” said a VMD spokesman.

“We are making good progress with the aim of getting a vaccine out as soon as possible.”

The VMD said it would operate timelines for the remaining stages of consideration of the application while ensuring through a rigorous scientific assessment process that proper care was taken so that any vaccine was safe for the relevant livestock.

A spokesman for MSD Animal Health said: “We are currently working closely with the regulatory authorities and cannot speculate as to when the vaccine will be available.”

Sheep farmers who have been struggling with plunging lamb prices and last year’s poor weather have suffered thousands of losses to Schmallenberg this season.

Carroll Barber, breed secretary for the Charollais sheep society, said the majority of members had reported flocks experiencing losses between 30 to 40%, with some in excess of 50%.

“We would very much welcome a vaccine – and the sooner it comes the better,” said Mrs Barber.

Nick Hart, a sheep farmer and vet based in south Herefordshire, said it was likely that the Schmallenberg vaccine would be administered in two doses, two weeks apart, with an additional two week-period needed for it to take full effect and immunise sheep against the disease.

“We need a vaccine for the next tupping season, which means we really need it by the end of May or start of June,” he added.

But vet John MacFarlane, of Alnorthumbria Vets, in Northumberland, said farmers should accept that the VMD should be given time to ensure that the Schmallenberg vaccine was safe and effective before its approval.

Earlier, government vets warned farmers that with no immediate timetable for a vaccine, farmers would have to bear the financial burden of the disease.

Alick Simmons, DEFRA’s UK deputy chief veterinary officer, told a Commons Environment, Food and Rural Affairs (EFRA) Committee meeting this week that the vaccine approval process had to follow a “tried and tested and properly legal method” and it was not the role of ministers to hurry the process along.

Schmallenberg virus was discovered in Germany in November 2011 and has spread to herds and flocks throughout the UK and Europe. It is transmitted by biting insects and causes miscarriages and birth defects in sheep, cattle and goats.

Follow the latest news on the Schmallenberg virus in the UK