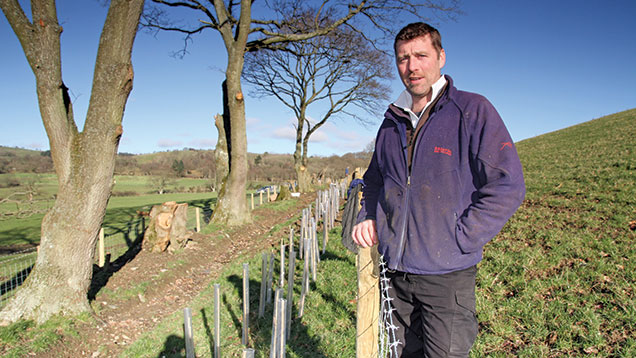 Welsh beef and sheep farmer Jonathan Francis has planted just under 15,000 trees in the past 12 months to help improve the productivity of his 63ha farm.

With the support of agri-environment schemes, 6.1ha of planting and 4.02km of fencing has been carried out by contractors at Tyn-Yr-Wtra Farm, Caersws, Powys, to increase biosecurity, improve grassland quality and create shelter.

On the lower ground substantial rainfall had left Mr Francis unable to turn stock out on to certain fields at key times of the year.

One area of concern was a 13ha exposed, sloping field, which had no shelter for stock and in times of heavy rainfall water would run-off the field into and cause serious soil erosion and sediment to be washed into the brook. This meant the field isn’t being used to its full potential.

“Sheep just go up there for the summer, but I wanted to make that more productive to free more ground up for lambing,” explains Mr Francis, who runs a flock of 100 purebred Welsh and 300 Welsh Mules.

With the help of Coed Cymru adviser Mike Richards, Mr Francis has created a linear “tree belt” which splits the field into more manageable 7ha areas.

The belt is six metres wide and is populated with 2,250 native tree species such as birch, oak and lime as well as high-density hedgerow species and shrubs to create shelter for livestock. It is fenced each side stretching 340m.

The planting and fencing were supported by the Woodland Trust’s PUR Fund, which funds 16,000 trees a year and is now in its second year, as it didn’t qualify under Glastir.

Under the Glastir Woodland Creation scheme shelterbelts had to be a minimum width of 12m. This has often deterred farmers unwilling to give up so much productive land for tree planting, explains Mr Richards.

“Agri-environment schemes have not supported farmers doing this work until now. Farmers are not going to give up productive farmland. Land is at a premium, but we believe narrow tree belts have a role to play in the agricultural framework,” he adds.

“The belt will provide added means of storing rainwater by increasing soil porosity and intercepting overland flows of surface water during periods of heavy rainfall.

“This helps to slow down the movement of water into the drainage system and helps reduce the impact of localised flooding.”

In fact, research carried out at Pontbren showed planting trees can increase soil porosity and water infiltration was 60 times to neighbouring grassland.

The remainder of the planting at Mr Francis’ did qualify for a 70% grant through the Glastir Woodland creation scheme.

Under Glastir a wider “buffer strip” along a streamside corridor has been created at the bottom of the field to prevent livestock from gaining access to the stream and sections of erosion.

“It was non-productive land that I gave up. It has made it more manageable straight away because I’ve been able to graze it harder and it has made it easier to gather the sheep.” Jonathan Francis

“It follows the land rather than having a consistent width, varying from three to 20m wide,” says Mr Richards.

“I’m hoping we will be able to utilise grazing a lot better in the spring because it will be drier and there will be more shelter,” adds Mr Francis, who would like to look at paddock grazing to improve grass quality.

Extensive work spanning 4.5ha has been carried out on the farm’s 25ha hill ground under Glastir, where three 16-18m shelterbelts have been created, stretching up to 400m.

These shelterbelts have been fenced on either side and Mr Francis has also given up unproductive dingles to create small parcels of woodland.

In total 3.2km of fencing has been completed to create several grazing areas.

“It was non-productive land that I gave up. It has made it more manageable straight away because I’ve been able to graze it harder and it has made it easier to gather the sheep,” says Mr Francis, who has already started to improve this land by reseeding 5ha.

The shelterbelts have been created to block wind at a low level to provide shelter for stock and reduce wind velocity at a high level, explains Mr Richards.

“The belts have been placed at high angles or near right angles to the prevailing wind to have more effect,” explains Mr Richards.

“Woodlands being created for shelter were planted at higher densities, up to 10,000/ha at the edges and 2,500/ha at the core.

Other benefits of tree planting

“This is necessary to create dense, low shelter suitable for sheltering sheep and a porous structure using taller trees towards the centre of the shelter belt for filtering the wind to reduce its speed on exposed ground,” he adds.

Mr Francis lambs indoors and by using a teaser for 17 days prior to mating he has reduced labour requirements by lambing over just two weeks.

But he says the shelterbelts, once established, will give him the option of lambing the bunch of Welsh purebreds outdoors.

“What we’re trying to achieve is to filter the wind – not block it – by having the correct tree belt design and using the right species to match the soil type.

He explains they’ve avoided planting oak because the hill is too exposed and damp, which would have reduced its ability to survive.

Instead they’ve used alder, birch, willow, blackthorn and hawthorn – all of which are indigenous to the region.

The belts have already strengthened boundary fences with neighbouring stock and improved biosecurity.

With scab once again becoming an issue on the hill Mr Francis says he feels confident his flock is protected, because they cannot come into contact with other animals.

If you are interested in tree planting then contact the Woodland Trust on 0845 293 5689 or email plant@woodlandtrust.org.uk to find out what grants are available to you or contact the Welsh Woodland charity Coed Cymru on 01686 650 777 www.coedcymru.org.uk

“Apart from losing a bit of ground I can’t see a downside to planting the trees with all of the benefits it will bring,” says Mr Francis.

He believes more farmers can benefit from planting woodland.

“Farming always made money but now we can’t afford to say we have always done it like this,” says Mr Francis.

“Without the support I wouldn’t have had the money to do it,” he admits.

Mr Richards says it also ticks all the boxes for cross compliance standards – by strengthening boundaries and protecting stock against diseases such as TB and maintaining good soil quality, protecting watercourses and preventing erosion – so Mr Francis is already ahead of the game.

Glastir proposals in Wales and Countryside Stewardship Scheme proposals in England will be announced later this year once the RDP funding is finalised.

It is hoped the new remit will favour narrow tree belts to allow greater uptake from farmers.