Each of the three finalists in the 2018 Farmers Weekly Sheep Farmer of the Year category are well-positioned to meet the challenges of Brexit.

They have developed profitable and sustainable sheep enterprises by keeping costs low and making the most from grassland and forage. 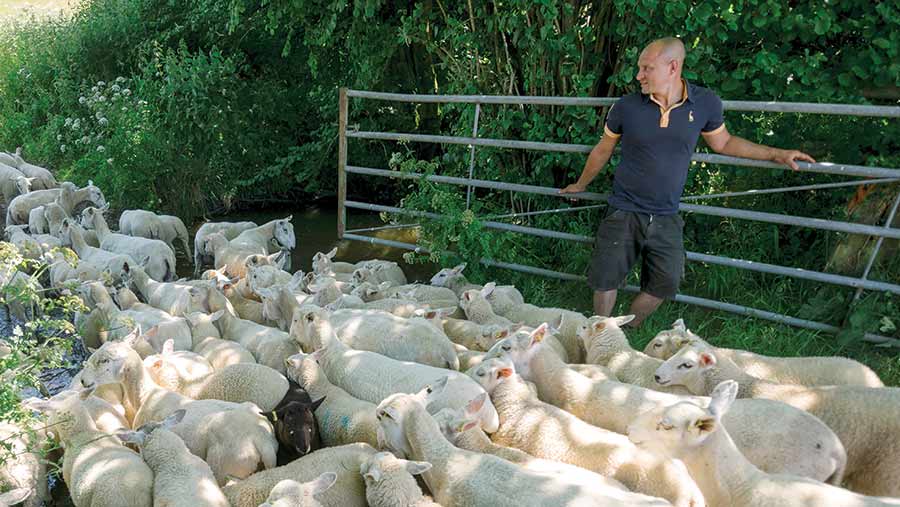 Many shepherds spend a lifetime trying to achieve their goals and still don’t succeed. But Rampisham Estate’s Gareth Beynon isn’t your average shepherd.

When he took the job in Dorchester four years ago, he had clear visions for the flock and he has done exactly what he set out to achieve just two years into his five-year plan.

He has replaced the indoor lambing flock of 300 North County Mules with Cheviot Mules, building up numbers to 1,800 and moving to mainly outdoor lambing in March.

One of the first things Gareth did was to cost the sheep enterprise separately so he could prove it was profitable in its own right.

“The figures were hidden across the whole business. They had sheep for the ground they couldn’t sell or put into arable.”

Now the sheep enterprise forms a vital part of the business.

Replacement ewe lambs are sourced from a nearby estate, but to make up numbers, Gareth is also breeding his own using NZ Texel-cross and Lleyn rams.

Meanwhile, UK Texels and Charollais cross Texels are used as terminal sires, with all rams sourced directly from farms in their working clothes.

He has cut routine anthelmintics use from more than 8mg/kg by carrying out faecal egg counting (FEC) and has stamped out contagious ovine digital dermatitis  by culling hard, which has seen lameness reduce from 15% to less than 3%.

Furthermore, through his involvement in AHDB’s Challenge Sheep discussion group, he has been weighing lambs at eight weeks and is now weaning based on ewe condition, with lamb weights averaging about 28kg at weaning. The bottom 8% of lambs are weaned aduring shearing at nine weeks.

The fact the majority of grassland is parkland or within higher-level stewardship makes grassland management challenging, but stocking rates have been lifted to six ewes/ha and 10 lambs/ha by sub-dividing fields with electric fencing, introducing rotational grazing and improving grassland.

A pan buster is being used to tackle compaction, and having had all fields soil tested, they are being limed as part of a five-year rotation policy.

Furthermore, working closely with the arable contractors has enabled Gareth to introduce red clover leys and, more recently, forage and kale mixes – which can be grazed nine weeks after planting in July and August – for finishing lambs.

All this has been key in enabling him to finish a higher proportion of lambs.

Three years ago, they weren’t able to finish any lambs. But last year, 37% were sold deadweight to ABP, with 80% hitting R3L at 18-21kg. The rest were sold as stores, with ewe lambs sold privately.

This has boosted the average sale price from £50 to £69.17. But the aim this year is to sell 100% of finished lambs deadweight.

More recently, Gareth has taken on winter grazing on a nearby dairy farm, which allows him to cost-effectively overwinter ewes.

It has been no small feat, but the changes have positioned the flock firmly in the future of the estate by proving to the owners that it is profitable, enhances the environment and complements the estate’s other enterprises.

But Gareth isn’t finished yet. He wants to reduce the lambing period by phasing out the older ewes and he has enough ewe lambs on standby to catapult flock numbers to 3,500 if circumstances allow.

“Gareth is a great young ambassador for the industry. He’s developing a sustainable sheep business by driving performance and is working in conjunction with the environment and the owners.” 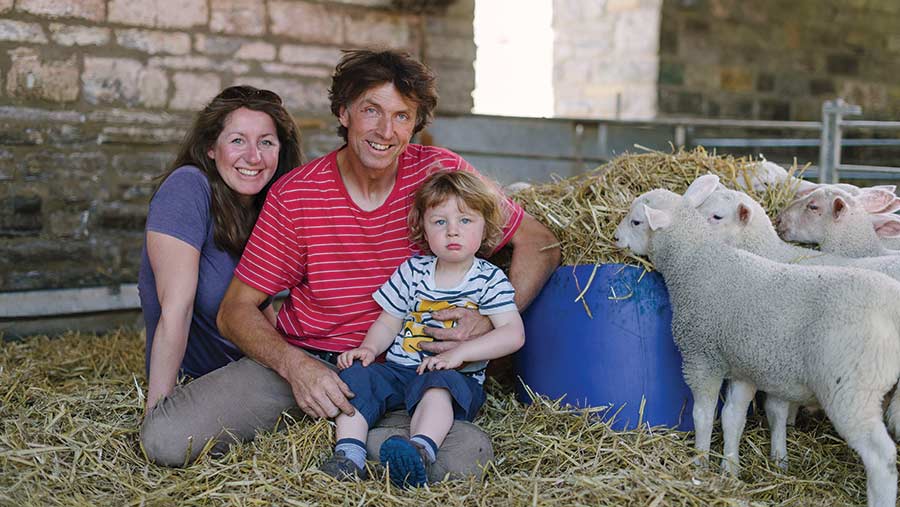 Thomas and Helen Garland with their son © Jim Wileman

When Helen and Thomas Garland saw an advert for a milking parlour in Farmers Weekly, it sparked an idea that would lead them to establish a sheep-milking enterprise.

When they took on the farm business tenancy at Burton Dairy Farm, near Langport, 10 years ago, they were rearing calves and running a flock of North Country Mules and Swaledales while both holding down full-time jobs off farm. But they were desperate to farm full-time.

“We were racking our brains for a business idea and then I saw an advert for a sheep milking parlour. It was fate,” explains Tom.

On a shoestring budget of £25,000 they installed a second-hand parlour, revised the existing housing facilities and sold some in-calf beef heifers to buy 100 milking ewes.

They have now built up to 650 Friesland cross Poll Dorset ewes, with Poll Dorset genetics introduced to improve hardiness.

Ewes are milked twice daily for six months before stepping down to once-a-day milking for the last two months of lactation.

Milk is sold directly to six different customers. To improve cashflow and maintain a level profile – meeting customer demand of 600 litres daily – they lamb four times a year in groups of 120 in September to November, January, March and May to June.

Lambs are taken off the ewes at two days old and reared on artificial milk powder, with about 200 ewes mated “pure” to produce replacements.

Texel and Beltex rams are used on the rest to produce finished lambs. Lambs are weaned at six weeks weighing 15kg and move on to ad-lib creep.

Finished lambs are sold to an independent meat wholesaler and average 19.5kg deadweight at R3L at 16 weeks, with some sold store and at weaning, depending on the buyer’s requirements.

With the majority of ground in higher-level stewardship, they are making the most of 28ha of new leys and preventing huge drops in feed intakes and milk yield by using a double-chop forager to zero graze sheep.

Sheep are typically rotationally grazed or strip grazed outdoors by day from March to October, but feeding zero grazed grass with a blend at night while sheep are housed has increased dry matter intakes by 10% up to 2.1kg a ewe a day. It is saving about £3,500/year on silage-making.

In the parlour they receive a flat rate of 400g concentrate at each milking.

Fine-tuning the ration and zero grazing, alongside good flock health and low mastitis levels of 0.6%, have helped boost yield by more than 100 litres a ewe annually.

A robust health plan sees all breeding stock vaccinated for abortion and clostridial diseases and faecal egg counting is carried out to prevent stock being treated unnecessarily for worms.

In future, the couple would like to invest in technology to measure milk yields to help inform their breeding and replacement policies.

They also plan on using genomic Lacaune semen from France and AI’ing their best 20 ewes to produce some breeding rams later this year to take their breeding to the next stage and widen the gene pool.

Long-term, their aim is to buy a small holding (24ha) and relocate the sheep dairy. But they say they won’t produce any more milk than they can sell.

“This inspirational couple have built a thriving dairy sheep business from scratch, without any subsidy, and are well-positioned to weather Brexit. Their customer focus and attention to detail are exemplary.” 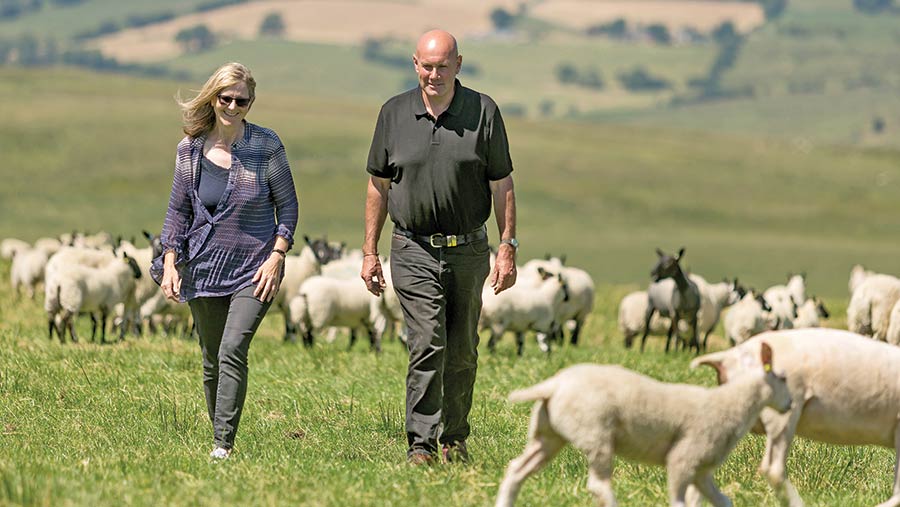 John and Sarah are constantly challenging convention and pushing boundaries on their 115ha upland sheep and beef farm.

Born a butcher’s son from Birmingham, John’s father originally bought the 27.5ha Llwyn y Brain Farm in the sixties. After studying agriculture at Aberystwyth, John settled at the farm in 1984. At the time interest rates had hit 22.5% and the flock was only managing 90% lambing, with the majority of lambs sold as stores.

Since then the couple have worked tirelessly to amass more land and lift output of their traditional Beulah flock. Today they are achieving 165% lambing, with male lambs sold direct to Dunbia and Sainsbury’s.

Flock numbers have expanded to 500 performance-recorded Beulahs plus 165 ewe lambs.

The best genetics are bred pure for replacements, with the remainder mated to Bluefaced Leicester rams to add value to their flock, with Mule ewe lambs sold in the autumn and surplus Beulahs sold the following year as shearlings.

Some purebred Beulah rams are also sold for breeding as yearlings.

A strong emphasis has been placed on performance recording for more than 30 years, before it became popular.

In fact, the flock was one of the founding members of the Beulah sire reference scheme and remains one of the few  recorded Beulah flocks in the country.

“It’s been a mountain to climb, but the key is lifting the bottom,” says John.

The aim is to breed ewes that can lamb unassisted and rear live lambs. Each lamb is EID-tagged at birth and ewes are culled hard for lameness, poor fertility, big teats and prolapses.

Perseverance and faith in recording is paying dividends, with deadweights of lambs lifting by almost 8kg and ewe prolificacy also improving.

Improving grassland management has also been key to boosting stocking rates to 13.44 ewes/ha and enabling the couple to finish lambs mainly off forage.

At mating, teaser tups are used for 14 days ahead of the ram to keep lambing compact.

Sheep are lambed indoors in March and April for three weeks before being turned out onto improved hill ground, where they rotationally graze grass, plantain and red clover.

It’s not a common sight at 1,400ft above sea level, and Mr Yeomans says the neighbours think he’s mad, but it’s about attitude, not altitude, and the Yeomans have positive attitude in abundance.

In response to the replanting, rotational grazing and planting of new hedges, 65 lapwings have returned to the hill ground following years of absence.

Not willing to stand still, they have recently purchased another 13.5ha close to the homestead and have already started headlong into an improvement programme.

In the short term John says he would like to lift scanning percentage to 175% and explore direct selling to add value to the farm.

They have dabbled in selling meat boxes directly to customers before with great success, but time constraints meant it wasn’t practical. However, with the youngest of their three sons, Joe (23), keen to explore this further, the Yeomans family may be going back to their roots of butchery.

“Their openness within the farming community and willingness to address challenges head on and try new things clearly cements them in a good position to deal with any future challenges and uncertainties that lie ahead.”

“The diverse range of businesses that fall under the umbrella of sheep farming is evident in the finalists of this year’s competition.

The commonality between all is their enthusiasm and drive to take their businesses forward.”