While scale, labour, topography and climate vary across this year’s amazing Sheep Farmer of the Year finalists, they all share a focus on grassland management, functional genetics and gathering, and using meaningful flock data.

The 2019 Sheep Farmer of the Year finalists: 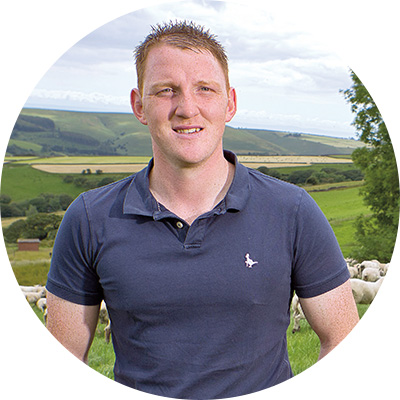 Rhys Edwards has transformed the family farm since leaving school in 2011, using electronic identification (EID) and rotational grazing to step up flock performance.

In just seven years, the farm has gone from selling 80% of lambs as stores to finishing 98.2% within specification off grass alone.

Supported by his parents, Russell and Eira, Rhys has strived to achieve lowland output from a 100ha  upland farm (101ha with 87 productive hectares), while managing other diversifications – a hydro-electric plant, a popular campsite and a field let out as a wedding venue.

Productivity
Liveweight production has increase 45% in just three years, with the farm on target to produce 414kg liveweight/ha in 2019.

This has been achieved by increasing ewe numbers from 500 to 600 head, rotational grazing and feeding a total mixed ration (TMR) diet to achieve a more precise late-gestation ration.

The rotation operates a simple 21-day rotation in eight 4ha paddocks carrying more than 900 head (ewes and lambs). Fortnightly grass quality analyses has shown that no concentrate is needed to grow lambs, with an average of 21.6% crude protein and 11ME in grass from March to July.

A refurbished forage wagon was bought for £3,500 in 2014, feeding a silage, rumen-protected soya, sugar beet and mineral ration devised by independent sheep consultant John Vipond, which saved £3,000 in feed bills in the first year.

EID has enabled Rhys to eradicate lameness and prolapses – with the help of the diet feeder – and optimise body condition and lamb birthweights.

Since 2017 average birth weight has increased 0.65k to 4.5kg and lamb mortality has halved to 10%. Furthermore, the proportion of ewes at condition score 3 or less at tupping has dropped from 50% to below 20%.

A good relationship with a lowland farmer and strict culling practices based on flock EID has transformed broken-mouthed sheep from culls into breeding stock for lowland farms.

This means the farm can sell ewes eight weeks earlier for a great price (£72 a head).

Labour
Parents Russell and Eira are partners in the business, with Rhys preparing to buy into the business in the future.

Russell and Rhys manage the stock, with Rhys concentrating on data collection and management around the farm. Eira deals with campsite bookings and the finances.

Constant debate and discussion takes place between Rhys and his father, with both welcoming new methods and taking an experimental approach to the farm.

A new automatic drafting handling system is saving time and stress in handling sheep, while excellent stockmanship is seeing pet lambs grow at 2.5kg a week.

Simplifying the day-to-day management of ewes allows Rhys to analyse the wealth of data he records on the farm as part of the Ram Compare project.

Future
A range of system improvements have been planned to increase farm productivity in the future.

The farm aims to add a further 50 breeding ewes over the next two years as grassland production continues to increase, while they are also keen to pioneer commercial artificial insemination work to ramp up genetic gain.

Meanwhile, hygiene, straw and labour costs will be addressed through experimenting with plastic-slatted crates for lambing ewes and pet lambs.

Conscious of growing pressure for red meat producers to be more efficient, Rhys is in the process of organising a carbon audit, with the hope of demonstrating carbon neutrality across the farm.

“Capturing and using data for key flock and grassland management decisions has propelled this business forward, while adaptability and innovation means the farm is well set for the uncertainty of the future.”

Judges liked
• Extensive community, educational and outreach work with schoolchildren and young people in the industry
• Technical performance is strong, including a significant reduction in lamb mortality
• Use rams with estimated breeding values and involved with RamCompare
• Flock and grass data capture and use has lifted kilogramme output a hectare from 284kg to 414kg while keeping costs low
• Diversified income with wedding venue let and camping site 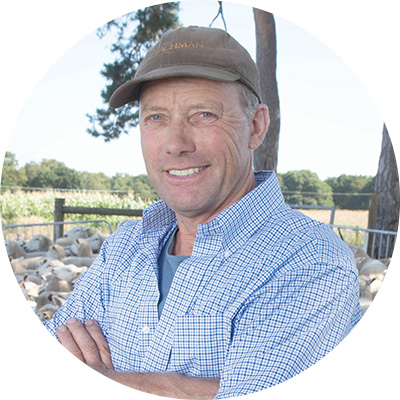 Stonehouse Farm, East Harling, Norfolk
A flair for managing an ever-changing business and maximising rental opportunities has seen Richard Evans build a flock of 2,000 ewes and buy two small farms in the process.

Over the past 30 years, Mr Evans has capitalised on Norfolk’s need for sheep to add organic matter to light Breckland soils and earn stewardship payments with conservation grazing.

After starting out in his teens with no land or stock, Mr Evans has balanced a range of contract work alongside farming to manage cashflow and grow his flock and reputation as a grazier.

Performance recording has improved growth off grass, with scanning weights showing a lamb carcass value gain of £5-£10 since 2010. Genomic testing has found the double-muscling myomax gene in 80% of the farm’s progeny.

A second flock of 200 feral Soay sheep inherited by Mr Evans in 2008 has been bred to Exlana, Easycare and Lleyn tups.

This was done to capitalise on the hardiness of the original feral ewes while adding heterosis, prolificacy and wool shedding through cross-breeding.

A third flock of 440 Hebridean sheep are also run, which receive a native breed stewardship payment. Lambs are sold prime at 12 months old.

Labour
With the business based across 15 landlords or more, and summer grazing spread across a 10-mile radius from the farm, labour efficiency is crucial.

Shepherd Joe Emmett is a vital team member, managing the store lamb enterprise, working three days a week through the summer and running his own flock.

Detailed time sheets record paid labour hours spent on each enterprise to achieve an average of one labour hour a ewe and just over two hours a ewe on the recorded flock annually.

Labour efficiency comes from putting faith in the maternal ability of the sheep and a pneumatic sheep handler that has made handling stock easier.

Future
The past 18 months has seen Richard, his wife, Sue, and daughter, Emily, work full time in the business, supported by three self-employed shepherds.

Diversifications into glamping, equestrian activities and direct marketing are being explored by Richard and Sue’s three other children children, Bob, Claire and Katie.

“We are constantly looking for talented shepherds who can work solo on other people’s farms,” says Mr Evans. “Established sheep farmers are nervous, but I think there will be opportunities for young people to get started in sheep farming.”

Mr Evans hopes the scale of the BFWN helps farms attract stewardship payments long into the future, while the link between ruminant grazing, soil health and carbon sequestration will offer new grazing opportunities in the future.

Furthermore, he hopes to continue collaborating with other breeders in the Performance Recorded Lleyn Breeders group to genomically test and breed for sheep with worm resistance.

Sharing fixed costs across the flock and producing more units per labour unit is a key aim, with Mr Evans aiming to have 3,000 breeding sheep on the ground next year.

“Starting out as a sheep contractor, Richard has worked tirelessly to buy his own land and develop a business that delivers profit through efficient maternal sheep and environmental stewardship.”

The judges liked
• Flexible system is maximising short-notice tenancies
• Trying to offer specific roles to his children to capitalise on their strengths and interests
• Monitors labour with time sheets and labour per ewe calculations
• Helping to lead holistic and environmentally friendly farming systems across neighbouring arable units, giving regional and landscape-level benefits
• Adding value to stock by performance recording and working with other Lleyn breeders 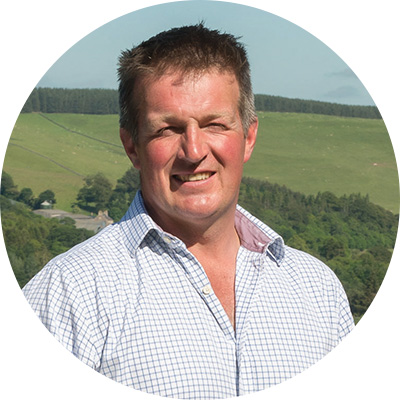 James Logan, who farms in partnership with his mother, Elizabeth, and wife, Jane, has spent the past six years preparing his business for Brexit and beyond.

With an open mind and a desire to experiment with new methods, the Pirntaton team has managed to increase kilogramme output a hectare in a sustainable and cost-effective way.

This has been achieved largely by rotationally grazing 120 paddocks after subdividing 37 original fields. Fencing costs have been met with a 300t saving in bought-in feed each year.

The farm can now also carry an additional 300 breeding hinds, brought in to diversify income.

A gravity-fed water system supplies drinking troughs across the farm to maximise the upland topography.

The farm still sells breeding sheep, but they are now pure Suffolks (35% New Zealand genetics) and Innovis Abertex (maternal Texel). All rams are forage reared and sold on the farm or through Innovis.

A commercial flock has been bred from the original commercial Mules and Texel-crosses by using New Zealand Romney and Abertex or Lleyn.

Commercial ewes now wean 1.5 lambs a ewe after previously weaning 1.33 in 2015, thanks in part to a reduction in lamb mortality from 12-13% to 8.5% and better-quality grazing for flushing.

The 100-day weights of the lambs this summer averaged 34.7kg, which is 3.68kg higher than the average for the past five years. It is done in a forage-based system.

Labour
The three partners and James’ son, James, each have a defined roll in the business, and all contribute ideas and skills to make the business tick.

Elizabeth helps out with stock work and lambing duties, while Jane manages the accounts, livestock records and human resources.

The farm manager role is taken on by James, supported by two full-time staff members, alongside seasonal support from son James during university holidays. In future, the farm may also add a third year student to the team.

James has recently completed the Rural Leadership Programme through Scottish Enterprise to improve his leadership and staff management skills.

He hopes the farm’s diverse livestock enterprises, desire to constantly evolve and the additional responsibility of contract shepherding a flock of 800 ewes on a neighbouring estate, will mean Pirntaton can attract, develop and retain talented young farmers by offering them scope for career progression.

Communication is facilitated through a Whatsapp group and repetitive jobs such as fortnightly grass measuring and lambing rounds are shared across the team.

Future
Another 100 hinds will be added to the holding, which the feed and financial budgeting programme Farmax calculated will require an extra 0.7t DM/ha/year.

This will mean annual grassland production needs to lift to 7.1t DM/ha/year. The increase could be achieved through a combination of more intensive rotational grazing, reseeding and slightly increasing nitrogen use from a very low level of 38kg/ha.

Meanwhile, wintering costs will be cut further by using winter forage crops instead of silage-based feeding. There is 9ha of fodder beet and 12ha of a kale/forage rape hybrid for this winter, which will allow pasture production to be lifted through spring reseeds.

“Pirntaton has come a long way in six years since opting to base the livestock enterprises on forage and rotational grazing. The farm has a clear plan for the future, with commercial livestock farming at its heart.”

Judges liked
• A thirst for knowledge and capacity to adapt, learn and tailor new systems to suit the farm
• A clear strategy to lift production through a stocking rate increase of 50 livestock units
• Good division of labour for lambing and grass-measuring duties
• Marketing a range of forage-reared rams

“Shearwell’s speciality is EID technology – tags, tools and software that farmers can rely on. Being committed to supporting British Farmers, we are pleased to take this opportunity to recognise the achievements of leading sheep farmers.”