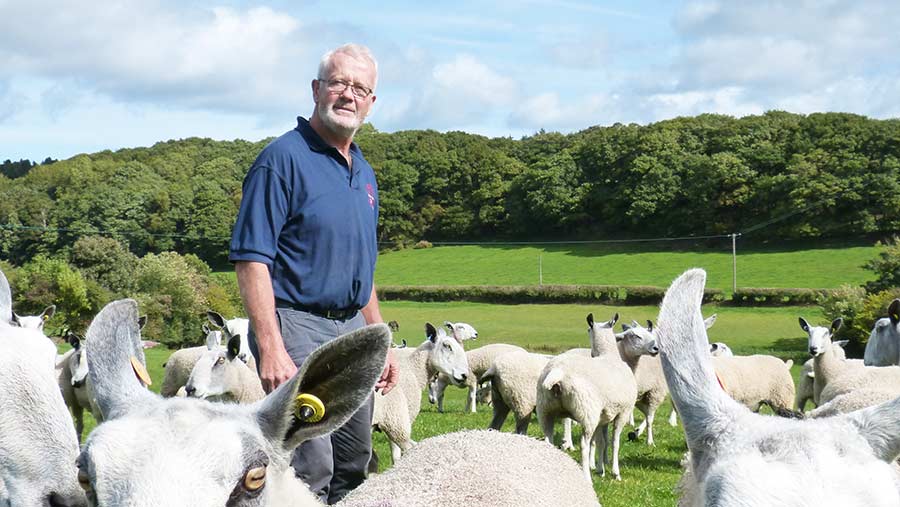 The Cernyw flock of performance-recorded Bluefaced Leicesters is lifting Mule sale weights for its ram buyers by placing a strong emphasis on performance recording and ramping up its ram genetic performance from forage.

These gains have been made while feeding less concentrate and have been linked to strict culling policies on teeth and paying close attention to muscle and fat depth estimated breeding values (EBVs).

Since the Cernyw flock began performance recording in 1997, the Owens have made major progress in flock conformation, including breeding Cernyw Muscleman, the ram with the highest muscle depth in the recorded breed.

Alongside Signet recording, father Elfyn and son Ifan’s mantra is that lambs should be reared on minimal concentrate inputs. This has seen concentrate fed to ram lambs reduced by 40-50% in the past six years.

Previously, rams were fed 2-2.5kg a head a day, but ram lambs now receive 0.5kg lambs pellets a head a day, starting a week or two before weaning. They are then given 1-1.5kg of ram mix, pellets and beet pulp in equal parts four weeks before sale at about six months old.

Rams are then paddock-grazed with electric fencing on short-term grass leys of perennial ryegrass and red clover in two- to three-day shifts until ewes are removed at weaning.

The lambs are required to work hard for customers when tupping as lambs and concentrate helps build condition, explains Elfyn, who sells tups to £400-£500 and up to £2,500 to pedigree buyers.

In 2014, the Welsh Mule Sheep Breeders Association (WMSBA) introduced performance Mules that could be marketed as such if:

Most sires bought into the flock are from performance-recorded flocks, but some non-recorded tups are used.

Teasers are used two weeks before ewes are sponged and artificially inseminated, with ewes bred for a total of three cycles before being swept up by a stock ram. Conception rates of 75%+ with frozen semen and 90%+ with fresh semen are achieved in the Bluefaced ewes.

Leicesters are scanned after Christmas and housed according to weekly body condition scoring. A typical scanning result is 200-220%, with one-third of Bluefaced sheep having triplets or quads.

The Welsh Mountain ewes are run as a closed flock and graze the higher parts of the farm up to 305m.

Ewes return from winter ground by early February and are put on grass, blocks and ring-fed silage before an April lambing.

Resulting cross-bred wethers are finished on grass and stubble turnips, with the last batch finished on concentrate. They are sold deadweight to Kepak at 20-21kg in the new year. Scanning is typically 150% and was 164% last year in the Welsh Mountain ewes.

A concerted effort to cut feed buying and improve silage quality has cut quantities of bought-in feed by 60% at Ffrith Arw.

Historically, the farm used 25-27t of feed a year through the winter. However, after adopting 5% magnesium high-energy buckets, feed use has dropped to 9t a year, while stocking 100 more Welsh ewes.

How Ffrith Arw reduced concentrate use 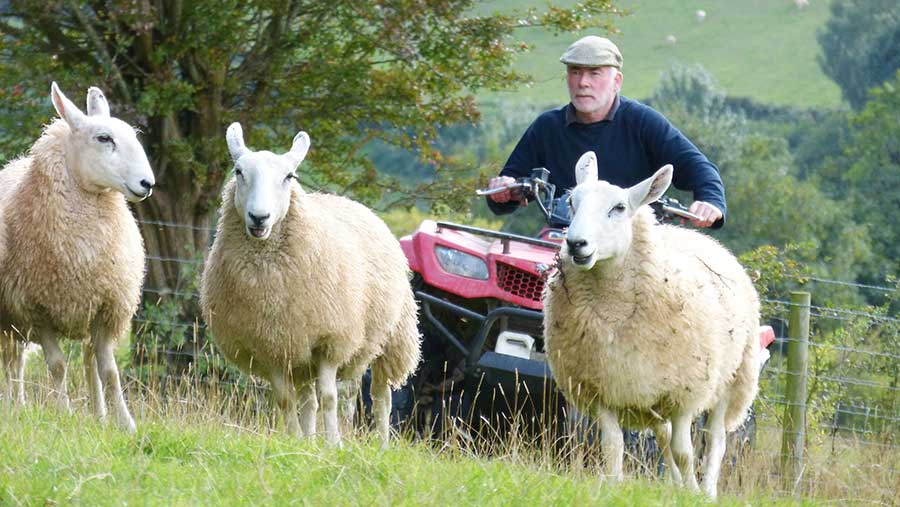 Historically, Mr Jones drew lambs for Ruthin Mule sales at a maximum of 50kg, whereas 48-50kg is now seen as the average, with the best achieving about 55-56kg in 2017.

The Joneses have bought PR tups for four years since the WMBSA scheme started and have marketed their animals as performance Mules for two years.

Mr Jones, who breeds and sells Mule ewes and Welsh halfbreds, says his customers are also seeing the benefit, with well-grown lambs scanning as high as 135%.

Mr Jones sources high-index tups at 150 index or more. All rams are of Cernyw breeding, including one ram each from the Lay and Gornal flocks.

“Choosing a recorded ram versus a non-recorded ram is like choosing between a book you’ve read and one you haven’t,” explains Mr Jones. “Both could be great, but without recording, you are judging the book by the cover alone.”

Each September Mr Jones sells about 70 Mule lambs and 50 dry shearlings at Ruthin in their working clothes after a diet of mother’s milk and forage only. They are walked half a mile to a wagon on a neighbouring farm in all weathers.

“Every year is different,” he adds. “This year our Mule wethers reached 43.5kg three weeks later than last year on 17 July – we are at the mercy of the weather and are always learning.”

All sheep lamb outside from 1 March (most lambing 14-24 March), with sheep and lambs temporarily housed for 12-48 hours if necessary.

Bluefaced tups are fed an 18% protein ram lamb mix for four weeks before tupping. Amounts are built up to 1kg feeds twice a day.