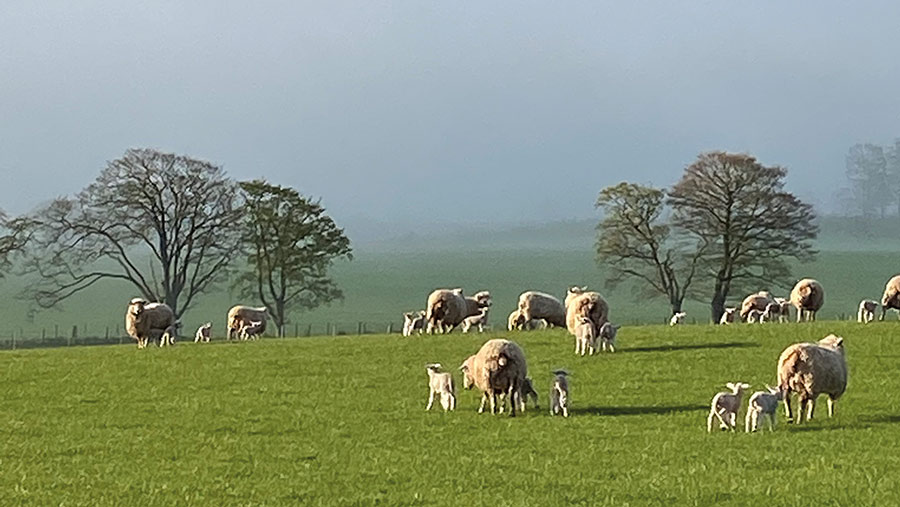 When David Mactaggart got his first flock of sheep 30 years ago, he had little experience and no means to employ a full-time shepherd. He needed a “one-man-and-his-dog” system, so he opted for outdoor lambing.

Mr Mactaggart, who runs his sheep on “kind hill” ground in a less-favoured area at Hallrule Farms, Bonchester Bridge, near Hawick, acknowledges setting up in this way was unusual at the time. It’s uncommon even now, he says.

“More farmers are changing to my type of system now, but they are 10-20 years younger.”

While outdoor lambing enabled labour costs to be kept to a minimum, Mr Mactaggart decided after a few years to switch to a hardier, easy-care breed. This meant flock size could grow without a corresponding increase in labour demand or lamb losses.

At the start, he had one man to help him lamb 800 Greyfaced Mules. At peak flock numbers 25 years later, the same team, with just one extra half-time helper, lambed 2,100 Romney ewes.

The Romney’s wide pelvis and arrow-shaped head allow for easier lambing, says Mr Mactaggart. This means the lambs are much more active at birth.

“Breeds with a short, stubby face and big shoulders, for example, take a lot of pushing, putting the lamb under stress at birth – a bit like having a hangover, in human terms,” he says.

“It’s worth saying that easy-care is not no care,” he stresses. “But the Romneys are better outside – they are hardier, and the lambs are quicker on to their feet. If a lamb isn’t up on its feet quickly [in this system], it’s a dead lamb. A few wet, cold days, and there will be losses. I’ve had enough blizzards in early May to know.

“I timed how long it took for a Romney lamb out of a gimmer to latch on. Even with the gimmer a bit jumpy, it only took three minutes.”

While other breeds, such as Lleyn and Easycare, also produce vigorous lambs, the Romney ticked a further box for Mr Mactaggart because its bigger-than-average fleece justifies paying shearers – even in a bad year like 2020. 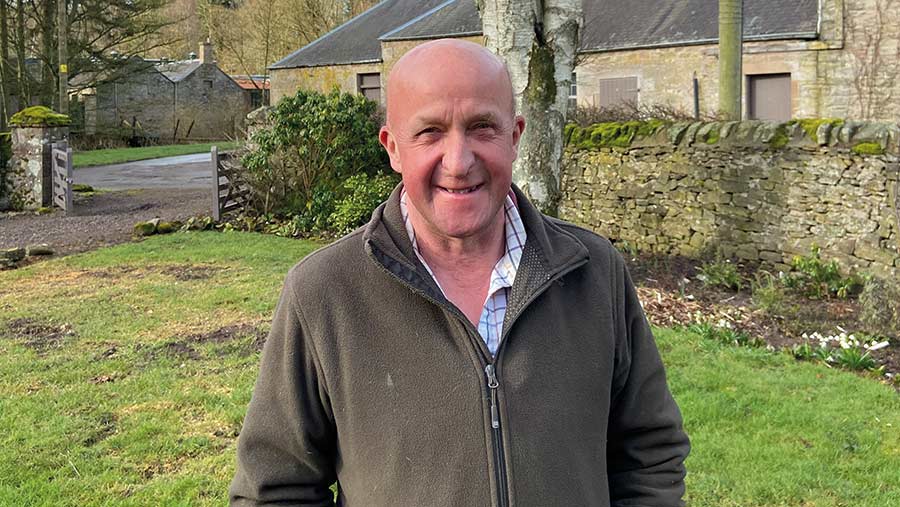 The price of Romneys was too high to buy in direct replacements, so Mr Mactaggart bred his way in, using Romney rams on Greyfaced Mule ewes. From the start, he took a robust approach, employing strict selection criteria. By the fifth year, with three-quarter-crosses (the flock is now seven-eighths Romney), the difference in ease of lambing was clear.

“I selected one trait at a time and had a ‘three strikes and you’re out’ policy,” he says. “I couldn’t select for all traits to begin with, or the culling rate might have been quite high.”

Mr Mactaggart now physically lambs no more than 1% of his flock, and they are generally only breach or dead lambs.

“[The process] has taken a lot of time, but it’s worth it. The recording of problems can be as simple as a different colour ear tag – whatever suits the system.”

Mr Mactaggart’s approach to foot-rot is equally firm, preferring his own “one-point plan” to the established five-point plan for lameness – any sheep with problem feet is culled, even if she is a really good gimmer in all other respects.

“People criticise me for that, saying it costs a lot of money, but in the long run it makes the system easier.”

A tight lambing period is maintained to identify and cull poor breeders. This year it will be 28 days, up on last year’s 22 days, owing to a number of changes elsewhere on the farm, but the downward trend will continue so that only the most fertile sheep are kept for breeding.

Ewes are tupped in groups of 300-400 on saved grass, then overwintered on rough grazing, with supplementary forage given in January and February.

This season the flock scanned at 170%, and ewes will begin lambing on 28 April, once the grass is growing well. There is “no concentrate feeding, full-stop”, says Mr Mactaggart. Expected rearing rate is 155%, and gross margin a ewe is about £50.

At lambing time, a stocking rate of about eight ewes a hectare (3.2 an acre) is used for ewes with twins, and 17 ewes a hectare (7 an acre) for singles. After lambing, a system of 3ha paddocks is gradually being introduced for mob-grazing to help keep better grass out in front of the sheep.

Lambs are weaned at the end of July. They are weighed in late August and sorted into light, medium and heavy mobs, with a minimum weight of 37kg going into the heaviest mob. This allows Mr Mactaggart to draw from the heaviest group without having to bring all the lambs back in. Lambs are sold from September onwards at 37-43kg.

Surplus ewe lambs are sold for breeding, and some Innovis tups are used to produce cross-bred ewe lambs to sell.

A Te Pari Racewell sheep handler, bought 15 years ago, has proved its worth, catching, weighing and drafting the sheep automatically.

A three-lane dosing race, with a rear side exit allowing sheep to turn back once dosed and let themselves out, holds about 80 lambs at a time and means dosing a shed of 1,000 lambs doesn’t take long.

“It doesn’t sound like a lot of time, but it adds up,” he says. “Where they really save time, though – and we’ve all done this – is when you go into a field to have a wee look and leave the gate open. There will be a sheep that smells that open gate and, before you know it, half the flock is out.”

The time saved switching to a low-input sheep system has paved the way for new ventures on the farm. The Romney flock now stands at 1,500 ewes and 400 ewe hoggs – scaled back from the 2,100-ewe high to create room and time to establish a herd of deer for venison production.

“I did the figures with my SAC consultant Moira Gallagher and found that deer could be more profitable than sheep, even with an easy-care system,” says Mr Mactaggart. “At that point, sheep were 70% of the business and I didn’t want all my eggs in one basket, especially with Brexit looming.

“I feel very confident about what we’ve done, and why. Also, I am an older farmer the upside of 50, and it’s hugely exciting – it revitalises me.”