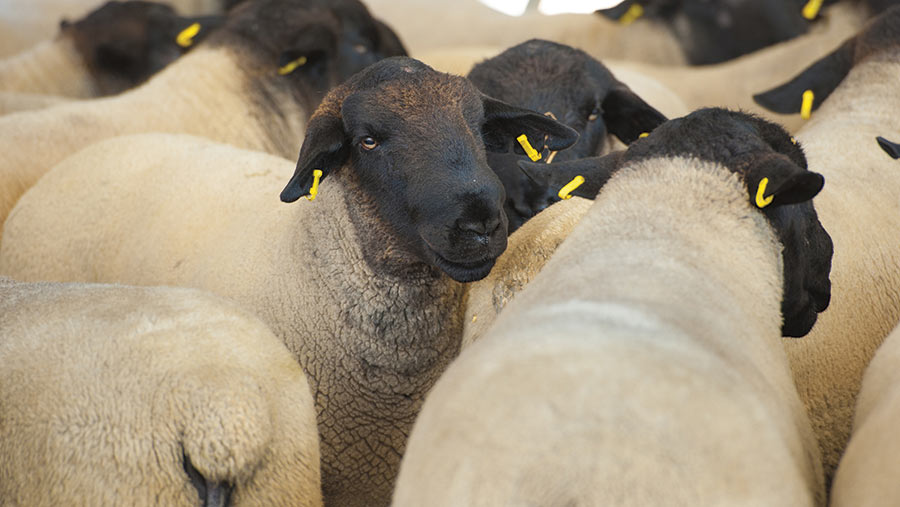 Most sheep trading is still done through breed society sales and one-to-one direct transactions. However, breeders with large numbers of rams to sell believe one-day auctions, hosted on their own farms, make sense in both economic and convenience terms. Debbie James finds out more.

Auctioneer Clive Roads, of McCartneys, says there can be benefits to both sellers and buyers.

“For sellers who might otherwise have two or three visits a week from buyers for six weeks during the selling period, on-farm auctions are a more convenient form of selling, because all or most of the animals can be sold in one day.’’

Breeders he has worked with allow rams to remain on farm after the sale, which also offers buyers an additional convenience factor when compared with selling at market.

“Buyers have the benefit of purchasing rams on a certain date in July, but not taking delivery of those rams until a later date,’’ explains Mr Roads.

At present, Mr Roads says there isn’t a groundswell of movement towards on-farm auctions. However, they are becoming more favourable among certain types of farmers.

“In the case of sheep farmers, who also have arable enterprises, the sale will be before they get into harvesting so they have time to attend but they needn’t take delivery of those rams until after they have got their crops in.’’ 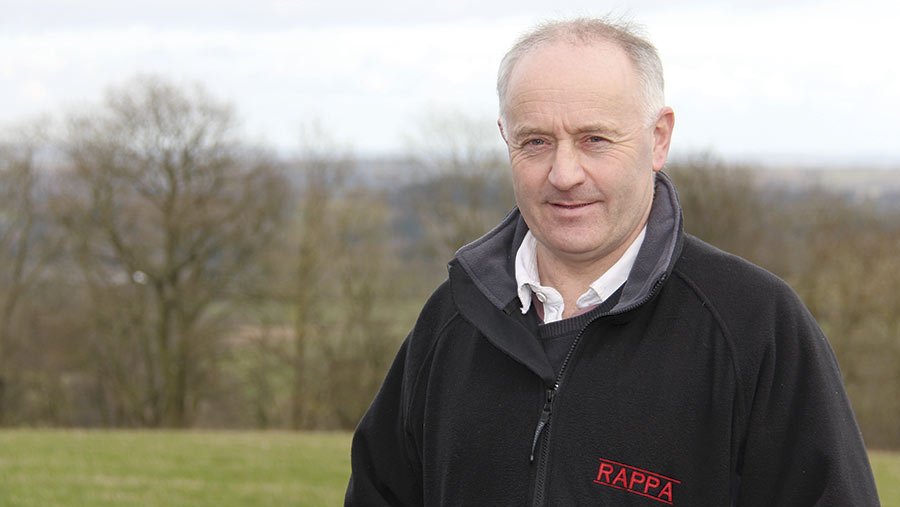 The Bullock family adapted an auction template commonly used on stud farms in the Southern Hemisphere for their annual on-farm production sale.

For Marcus and Kathryn, who run Bank Farm Lleyn near Abberley, Worcestershire, with their daughter, Kate, selling rams privately was time-consuming at a busy time of the year.

“As much as our customers appreciated having a slot to themselves, it was absorbing an awful lot of our time during an exceptionally busy time of the year,’’ explains Mr Bullock.

And the system created no competition between bidders, he adds. “We had established a fixed price system over the years, and customers came with that in mind.’’

However, the “first come first served” nature of private sales was unsatisfactory for some buyers, he recalls.

“Some customers came towards the end of the season and said they felt like they were being sold the ‘last puppy’ in the shop – they would have liked to have had more choice and possibly were prepared to pay a bit more.’’

How the bidding process works

There was only one way to find out. So soon after, the Bullocks seized on an auction model known as Helmsman, which they had seen operating on New Zealand’s South Island, as a means of selling both rams and stud bulls.

This system involved customers chalking their bids on a blackboard next to the animal they wanted to buy.

Each animal had a reserve price and if someone wanted to bid higher, they erased the figure and inserted their own bid.

While the Bullocks liked the principle of the system, they opted for a more tamperproof, professional and transparent model, utilising the services of McCartneys.

At their annual sale rams are set a reserve price; this varied this year from 350 to 650gns.

Each potential customer has a bidding card. “There are pens of 10 rams and as each pen is being sold, if someone wants an animal they walk up to the auctioneer and will quote the price they want to pay for that ram, at or above the reserve price, and that is marked on the board,’’ explains Mr Bullock.

Bids are taken in increments of 50gns, and if a bid reaches 1,000gns, that animal is then auctioned conventionally.

In the first two years, approximately 10% of the rams entered in the sale went under the hammer after reaching 1,000gns on the bidding boards beforehand; the overall yearling ram average in both 2016 and 2017 was well in excess of 700gns.

“The bidding system is entirely transparent and provides purchasers with a relaxed system of purchasing rams without the immediate pressure of a conventional auction,’’ says Mr Bullock.

McCartneys is paid a percentage commission on the sale of each animal.

Linking up with an established auctioneer is beneficial for pre-sale advertising, reckons Mr Bullock.

He also has a database of 5,000 potential buyers who receive flyers advertising the sale, which enables them to request a sale catalogue.

The sale averages around 120 buyers. To attract that number of prospective purchasers, a breeder must have a reputation for producing stock that will perform, says Mr Bullock.

“Without exception, they must stand foursquare behind the animals sold.’’

Volume of rams and consistency of quality are important too, he says. “We provide buyers with a wide selection of blood lines, while ensuring all rams sold fall within the top performing 25% of the Lleyn breed overall.’’

The change in sale method has brought huge time efficiencies, Mr Bullock calculates. “Three years ago, we sold approximately 90 rams and the average sale was 2.5 rams, which is around 36 different customers. That would have been 36 private visits,” he explains.

Maternal rams are sold mainly to other closed flocks for breeding replacements, so biosecurity is a priority for buyers, he says. Direct sales satisfy that requirement.

“After the second foot and mouth outbreak in 2007 we made a conscious decision to stop selling at society sales and to develop private sales of breeding stock directly off the farm – biosecurity was at the forefront of people’s minds and that is still there.’’ 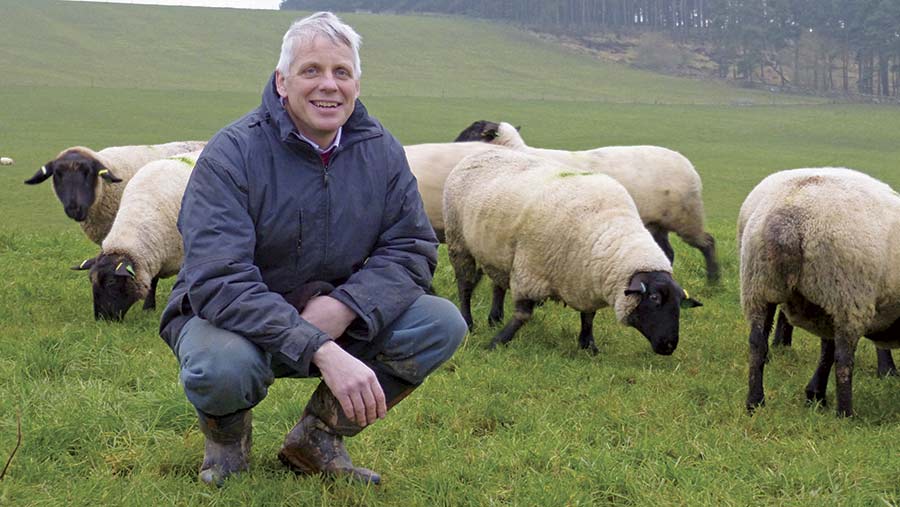 The cost and labour pressures of intensively feeding rams to achieve the size expected by buyers in a conventional auction system triggered Malcolm Stewart’s switch to an annual on-farm sale.

With up to 185 rams to sell in a single day, the pedigree Suffolk breeder had been one of the biggest vendors at Kelso.

But to get the rams to the size that a sales environment requires, rams were housed for six weeks prior to sale and fed four times a day – a time-consuming business.

Five years ago, Mr Stewart says it became obvious the current subsidy system would diminish and this would require labour efficiencies.

So he changed his approach to selling and is now in his fourth year of selling off-farm. Each year he sells 50 rams for between 400 and 1,400gns.

“I could see a growing market for tups that weren’t fed an enormous amount of concentrates,’’ says Mr Stewart, of Sandyknowe Suffolks, at Melrose in the Scottish Borders.

“We have moved in that direction and my tups now average 90kg instead of the 150kg you might expect at sales, because we are breeding rams that will do well at grass and take labour out of the system.

“We aim to produce genetics not aesthetics; rams that are bred to breed and reared to last.’’

Previously, rams were fed 0.45kg of feed three weeks before auction day. This cost has now been eliminated.

The new system of selling is a better fit for his other farming commitments. “Going to Kelso had interfered with the rest of the farming activities,’’ explains Mr Stewart, who also has an arable enterprise.

The sale is conducted in the same way as a traditional auction, with Scott Lambie of Borders Livestock Marketing auctioneering, and a percentage commission paid on the sale price.

There were 25 potential buyers registered at this year’s sale on 7 September and 21 of these bought animals.

Mr Stewart says Kelso is an excellent sales platform so the only reason buyers would come to his sale is if they wanted to buy his rams. “It sifts out the serious buyers beforehand.’’

Next year he aims to focus more on generating publicity for the sale, but keeping within his current advertising budget of around £2,000.

“We don’t have a big budget for advertising so we can’t go splashing out, but you have to speculate to accumulate.

“We advertise through our website and Facebook, but we need to become more in tune with social media.’’

The benefits of selling off-farm