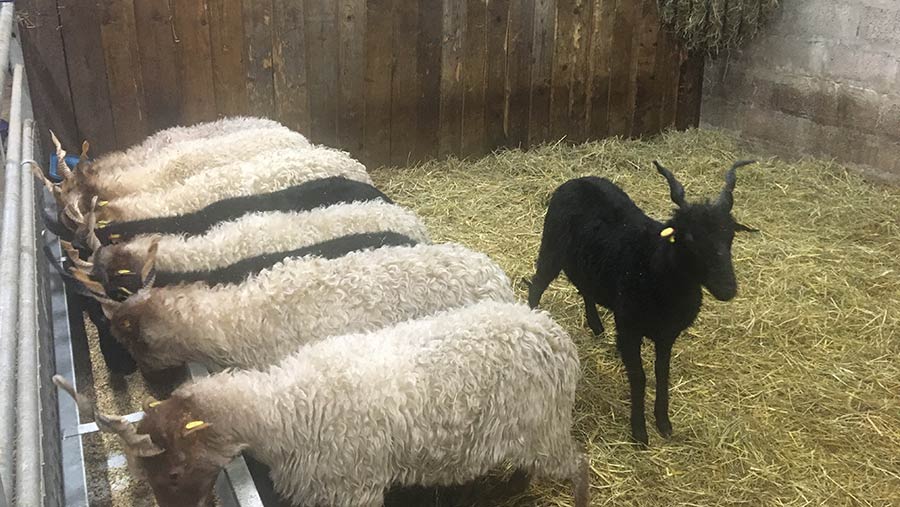 The Racka sheep in their quarantine pen in Somerset © Rose Overton

A Somerset smallholder has negotiated mountains of paperwork and bureaucracy to become the first breeder since Brexit to import live sheep from the EU via the Calais-to-Dover crossing.

Teacher Rose Overton’s defiant six-week struggle culminated in 12 Racka sheep making their way to her farm from an Austrian breeder.

Mrs Overton, of Beer Mill Farm, Taunton, said Defra officials at the Animal and Plant Health Agency (Apha) told her importing sheep from Calais was impossible – which was like “a red rag to a bull”.

“I was told I couldn’t do it and I thought, ‘I’ll show them’,” Mrs Overton told Farmers Weekly. “It was such an unbelievable amount of work and probably the weirdest thing I’ve ever done.”

The sheep arrived at Beer Mill Farm on 26 November.

She persisted with the Channel crossing because the other route – through the Northern Ireland “soft border” – was a much more arduous journey for the sheep.

“The sheep would face a much longer boat journey to Ireland, a truck drive through the Republic of Ireland and a 30-day quarantine in Northern Ireland – how is that better?” she said.

“It took 25 hours for the sheep to travel from farm to farm, and that was with a delay at Calais and traffic holdups. Driver Michiel Thijssen had them in luxury.”

“I can’t understand why policymakers and risk managers at Defra were saying they could not get sheep from Calais because of health risk, yet sheep could go through Ireland to Northern Ireland and then finally sail over to the UK – it doesn’t make sense to me.”

Getting the paperwork done meant working through every lunchtime and after school. Then, after a day of teaching and a parents’ evening, she boarded a ferry with her bicycle to check the sheep made it on board on the French side.

Once docked in Calais, Mrs Overton walked around the lorry lanes of the port, found an open door and wandered in.

Speaking no French, she was greeted warmly by customs officers, given cups of coffee, taught a few French phrases, and shown how the port worked on the computer system.

“I arrived at Calais in the middle of the night – it was freezing. The old terminal is shut and the new one isn’t open yet, so I was very lucky to find such nice staff there.”

The final hurdle, which she managed with help from a German-speaking friend in Ireland, was to get an official letter of approval from the Austrian government.

“Everything had to be translated and duplicated, I even had the Austrians translating every piece of paperwork for Apha.”

Ten ewe lambs and two ram lambs are now housed for a 30-day quarantine, having been tested for a raft of diseases before departure, including bluetongue and maedi visna.

She first imported sheep from the Austrian farm in 2020 (before Brexit), when nine Racka successfully made the crossing.

The National Sheep Association (NSA) technical and policy team, who assisted Mrs Overton with some of the paperwork, confirmed that this was the first post-Brexit transit of live sheep from Calais.

NSA chief executive Phil Stocker said the Northern Irish route had been used by other breeders.

“It’s great that Rose has done it and persisted [with the Channel crossing],” said Mr Stocker.