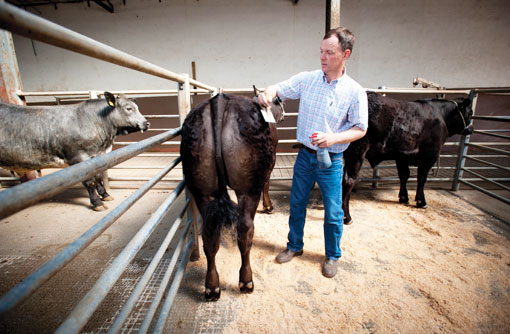 The purpose of the evening was to stage a hypothetical way of going for a tenancy termination. The attendees were asked to value livestock, crops, feeding, a shed and a farm cottage. Overall, the evening seemed to be a great success and it is hoped that this will become an annual event in the Borders.

There was also a competition to guess the weight of our young Limousin bull. The weights that were suggested ranged from 540kg to 1,237kg. The actual weight was 660kg – this just shows how important it is to have weigh bars fitted to your cattle crush.

The show season has started for us and we had a trip to Northumberland County Show with a homebred bull. One of the reasons for the trip, apart from getting the bull used to the show environment, was to give our student, Neil, the opportunity to show in the Young Handlers class. Neil did really well, considering that it was the first time he had led a bull in a show ring, and he was up against experienced youngsters who have been leading animals since a very early age. The bull was also shown in the open class, but he didn’t get on all that well. He did behave himself and hopefully he will get another outing at Kelso Show next month.

The air-operated shedding gates in our handling system are now completed and have been tested out. They are working really well and will help to speed up the handling process with cattle.

Robert and Jac Neill run 300 Limousin-cross cows on 1,082 acres at Upper Nisbet in the Scottish Borders. They farm 600 acres of cereals, and all progeny from the suckler herd are finished on home-grown fodder and sold live throughout the year to local butchers. Robert was Farmers Weekly Beef Farmer of the Year 2006

For more articles from Robert Neill