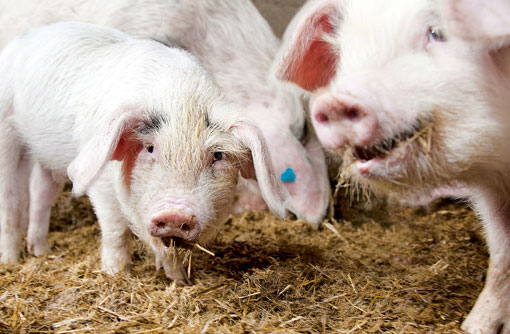 Silage might not seem like an obvious part of a pig’s ration, but in the face of rising grain costs, Oxford-based FAI Farms is reaping the benefits of using a less-conventional feed.

The 1,850-acre mixed livestock business has been using silage to feed its 30-head herd of organic Gloucester Old Spot pigs for the past decade.

Unable to grow large volumes of arable crops, but growing silage to feed its 100-cow suckler herd and 1,200-head ewe flock, the business discovered silage was also a viable option for feeding its pigs.

More than 10 years later, FAI farms has collected a wealth of anecdotal evidence that suggests pigs thrive on being fed silage and that there are cost savings to be made.

And now thanks to European Union funding via DEFRA, the farm is running trials to find out exactly what sort of growth can be achieved from feeding silage to pigs, as well as how the system could be used on commercial pig farms.

The three-year project, which began last summer and involves nine other European countries, will also investigate whether soya in the pigs’ diets could be substituted with other sources of protein, such as beans and peas.

“We make a lot of silage and grow some barley, but our land is not really suited to lots of arable, so we decided to look at alternatives,” says Ruth Clements, FAI Farms’ head of veterinary services.

“We did some research and found when you feed pigs grain you only utilise the glandular part of the digestive system, but that 50% of the system can be utilised for forage.

“We had been ignoring that capacity in pig production, plus feeding pigs grain isn’t the most sustainable method, so feeding them silage was a sensible thing for us to start doing.”

“We [the pig industry] have gone down a narrow alleyway with feed that was great when raw materials were cheap, but they aren’t cheap any more.”

The pigs are fed silage as part of a total mixed ration (TMR) that also includes barley and a protein source.

“We feed sows and lactating sows, so the piglets start eating it straight away,” Mrs Clements says.

“We floor feed on a concrete area of the pen and try to feed to appetite so all feed is gone by morning. It’s really simple.”

The TMR is altered depending on whether pigs are weaners, in the growth phase or finishers, to meet the animals’ nutritional needs.

“There are a few difficulties, just as with any ration formulation, but we have found a way to get around it,” says Mrs Clements.

“We can be short on lysine sometimes in weaners and being an organic system we can’t use a conventional supplement. But we have found that scattering four whole egg shells a head on the ration solves that problem.”

While FAI Farms may have started using silage from a largely land-use perspective, there have been additional behavioural benefits that have made the system even more beneficial.

“Pigs are natural foragers and will spend 70% of their time rooting,” Mrs Clements says.

“Silage and the TMR is perfect for that because it’s reward-based. There’s less aggressive behaviour and less adverse social interactions. We haven’t seen a single tail-bitten pig.”

“We have also found, which has been backed up from trials, that gastric ulceration is virtually obliterated and gut health is improved.”

For FAI Farms, using silage has reduced costs as it is no longer buying-in feed crops, but Mrs Clements says the trial will aim to give a clear indication of the economic viability of silage on a commercial basis.

“Our standard silage has traditionally been grass clover, but for this trial we have also used some lucerne silage,” she adds. “It gives higher protein and potentially reduces the amount of grain-based crops we need to add to the ration.”

So far, logistical challenges have been the biggest problem to feeding pigs silage, as keeping the ration dry and edible in outdoor systems can be tough. But where farmers are well-placed to grow grass, there is no block to feeding pigs forage, she says.