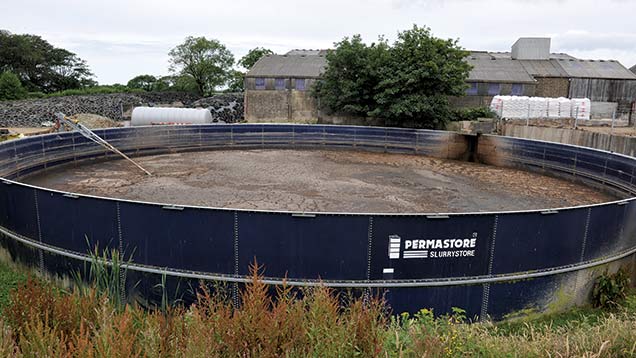 A series of simple and cost-effective changes to slurry and effluent controls have allowed a Welsh dairy farm to reduce its storage requirements post-herd expansion and comply with pollution directives.

Stember Farm, a Farming Connect demonstration farm near Haverfordwest, has a 2m-litre slurry store that was installed in 1993 when the farm was milking 130 cows. However, as cow numbers grew to 180, so too did pressure on that facility.

“We had a lot of water going into the tank, so when the weather was bad we were emptying it every two months,” explains William Jenkins, who farms with his parents. They run the Ember herd of pedigree British Friesians, yielding 7,400 litres from an all-year-round calving system.

The farm falls within the Western Cleddau river catchment and is rated as an Amber catchment. This means that there are issues with water quality and if the situation is not addressed and improved, the catchment could potentially become a Nitrate Vulnerable Zone in the future with consequential financial implications for farmers.

In Wales, farmers are entitled to 80% funding from the Farming Connect Farm Advisory Service to examine options for pollution prevention.

Through this programme, the Jenkins worked with Keith Owen, senior buildings and environmental consultant at ADAS. Mr Owen pinpointed potential pollution hotspots and came up with the most cost effective solutions.

Slurry at Stember Farm is gravity fed into the store from a slatted-floor system. This mechanism ruled out increasing the capacity of the existing store. “It was far more beneficial and cheaper to look at other ways of dealing with potential problems,” says Mr Owen.

Separating clean and dirty water was a priority. Gutters and downspouts were fitted on all buildings to divert rainwater away from the store. In the near future a roof may also be fitted to the storage tank to prevent rainwater entering.

Capturing silage effluent was another priority and a 40,000-litre storage tank was installed to collect effluent. Although the cost of this is £4,000, Mr Jenkins says it was money well spent.

“It would have cost a great deal more to make changes to the slurry store,” he says.

There is little effluent running off the silage as it is wilted before being clamped; last year it analysed at 28% dry matter. But Natural Resources Wales recommended creating storage and the tank was the cheapest option.

“Any seepage on to the yard is regarded as pollution, the amount might be negligible, but during a cross-compliance visit it is something that will be picked up,” Mr Owen explains.

“Something simple like creating a concrete barrier that can be done very cheaply can resolve this.”

“There are farmers who hope that any potential problems will go away because they are concerned they could get into trouble if they draw attention to the situation. But these problems won’t disappear and need to be dealt with. In many cases it is as simple as separating clean water from dirty water.

“If there is a plan in place Natural Resources Wales, or whoever the regulatory body is, will be satisfied that the farmer is moving to a point where they are compliant.”

Mr Owen says it was better for farmers to be proactive rather than face cross-compliance breaches and a potential loss of part of their Single Farm Payment.

In Wales, NRW is delivering several pollution prevention and detection campaigns throughout river catchments. And Farming Connect is providing support and advice to farmers through a series of farm events highlighting practical ways of managing clean and dirty water.

“Many farmers are too afraid to face the problem because they only see a big bill for an expensive new slurry store, but in reality it can mean just a few straightforward improvements that will save them a lot of worry,” said Mr Owen.

Cost of the measures

Farming Connect is a Wales-wide service funded by the Rural Development Programme and the Welsh government. As part of an ongoing series Farmers Weekly will be visiting a different Farming Connect demonstration farm regularly to find out what projects have been undertaken and how performance is benefiting.