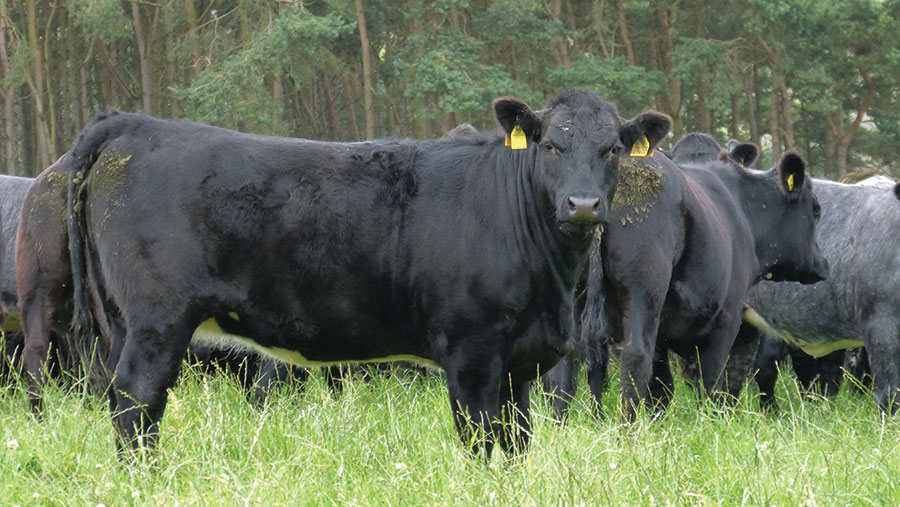 A Scottish beef-finishing operation has used forage-only finishing and in situ fodder grazing to freeze costs and build a resilient business.

First-generation farmer Michael Shannon has held summer and winter costs at 29p a head a day and 48p a head a day respectively for almost a decade on his store cattle enterprise.

Controlling variable and fixed costs has been essential since Mr Shannon started farming full time at Thankerton Camp Farm, Biggar, in 2007 after moving over from Northern Ireland in 1985 to work in the seeds industry.

While in the allied industries he worked out costs to the penny, an attribute that is helping him get close to being able to farm without subsidy.

A key part of his approach is getting cattle to graze forage in the place it is grown (in situ), thus saving on harvesting.

Grass silage is left in the field and fodder beet is not lifted but strip grazed in fields with kale and a kale/rape hybrid.

“I’m a big believer in in-situ grazing,” says Mr Shannon. “Why put a machine between the animal and the feed? Let them harvest it themselves as it saves on machinery and labour.”

Working off a 180-day summer and 180-day winter, Mr Shannon’s system finishes cattle outside all year, with smaller stores wintered inside on a maintenance diet of grass silage and barley wholecrop. 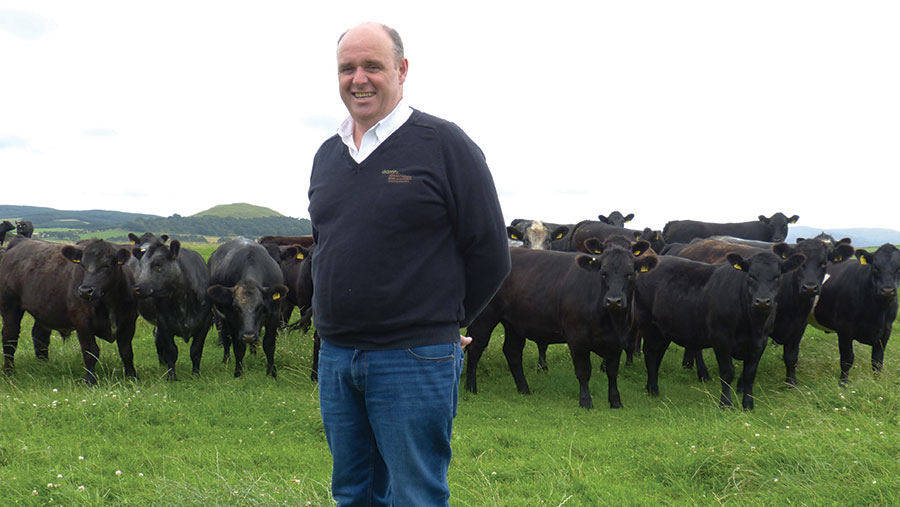 The plan is to buy 350-400kg Angus and Angus-cross cattle and finish them after 400 days on farm at between about two years to 30 months old, adding £1/day to each beast’s purchase store price.

“I get the Angus premium so I’m currently getting £4.20 but the average price for the year is £3.88,” explains Mr Shannon.

Summer costs were 27p a head a day in 2016. Cattle are weighed every four to six weeks to monitor growth rates on different forages and estimate slaughter dates.

Cattle are rotationally grazed on daily shifts on grass leys between April and October on rounds varying between 28 and 18 days. Mob sizes are reduced from 75-80-head in the spring at 1,200kg of liveweight/acre dropping down to 1,000kg/acre in July and then 800kg by August/September.

Grassland is redrilled every five to six years exclusively with high-sugar diploid grasses (no tetraploid) rated the highest for grazing value and yield, with clovers mixed in to provide protein and fix nitrogen into the soil.

Diploids are chosen because these are typically best suited for direct grazing, explains Mr Shannon, a key feature of the farm’s cost and labour structure.

“My thinking here is grazed grass is the cheapest feed and I should grow grass rated for grazing performance and not silage performance,” says Mr Shannon. “Grazing value is more important than silage for my system – in summer the cattle can motor at 1.5kg/day while in winter I maintain them at 0.4-0.5kg a day and some do 0.3kg/day.

Grass varieties this year are all on the SAC and AHDB recommended list for grazing and are rated with D-values of 75.6, 76.7, 78.5 and 79.3, with industry leading grazing yields/ha.

Sheep are grazed on grass leys in the first year to create a dense sward and help plants tiller out.

At the end of the ley’s life, the field is treated with glyphosate five days prior to silaging. The field is then disced and drilled with swift or kale, while bales are left in situ for winter forage.

Come spring time the field is disced again and this time sown with high sugar diploid grasses and sometimes barley. This is then taken as a wholecrop and pitted.

“This keeps land in production,” explains Mr Shannon. “Winter work is all done in June. The bales are in the field and the kale or swift is drilled.”

Store cattle: Picking them for the system

Winter time sees about the half the cattle taken off the grazing platform where they enter kale or swift (kale/rape hybrid). About 70-80 of the smaller cattle are housed inside and placed on a maintenance diet of grass silage and barley wholecrop.

“I use swift for the first part of the winter and then Maris Kestrel kale at the end as it is more winter hardy,” explains Mr Shannon.

The past three winters have seen fodder beet added to the system, with agronomy advice from Wallace of Kelso. This has doubled liveweight gain.

“Before I was using fodder beet my maximium weight gains in winter were 0.4kg a head day, which has lifted to 0.8kg/day or more,” says Mr Shannon.

This means he has been able to start finishing cattle in the winter time and experiment by offering all forages produced on the farm at once in each break, a method Mr Shannon has dubbed “in situ forage total mixed ration”.

Relying on in situ forage feeding has helped keep fixed costs down – labour, machinery and depreciation all benefit from the system, says Mr Shannon.

“I need to run something I can manage myself and this is a benefit of the native breeds I have on the farm as they are well-tempered to handle on my own.

“The only machinery I need for the sheep and cattle is a quadbike, one tractor, one fertiliser spinner, a slurry tanker, a loader and a bale clamp. Contractors do the remainder of the tillage, spraying and silage work.”

Another benefit is the flexibility of the system. Adding fodder beet to the winter feeding has meant the farm shop – Damn Delicious – can sell home-finished beef year round.

“This is a big step as it means I no longer have to maintain shop supply by buying in beef at Christmas time, when sales treble,” says Mr Shannon. “About two-thirds of beef produced on farm is now sold through the shop the year round.”

Growing a rape/kale hydrid (Swift) means high-protein feed can be grown quickly late in the summer while also carrying some of the winter hardiness qualities of kale, explains Mr Shannon.

Combining three types of fodder (round bale grass silage, swift and fodder beet) at once will be tried this winter with one bale of silage on each forage break.

Dubbed an in situ winter total mixed ration (TMR) by Mr Shannon, the diet will effectively provide the cattle with a TMR of three forages.

“My thinking with the in situ winter TMR is cattle will get fibre from the silage, meaning they make more from the fodder beets and brassicas. It will hopefully make their rumens function that bit better.”

“Weight gains have doubled on fodder beet,” explains Mr Shannon. “And I grow a rape/kale hybrid because it gives me 2-3t/ha more yield in dry matter.

Good fodder beet crops lifted winter gains from a maximum of 0.5kg/day on kale to 1kg/day, meaning Mr Shannon now plans to finish cattle through the winter on beets.

Meanwhile, each break will contain one silage bale, wrapped and left after harvesting and ring feeders brought to them. “It’s a trick I saw in New Zealand,” explains Mr Shannon.

“Don’t drop the bale in the ring feeder, do it the other way around. This way there’s no tractor travelling on land in winter. We used to offer two bales but the Beet has reduced the number required.”

The winter feed is prepared by ploughing out grassland in April, and ensuring fodder beet strips are weed controlled to allow good establishment.