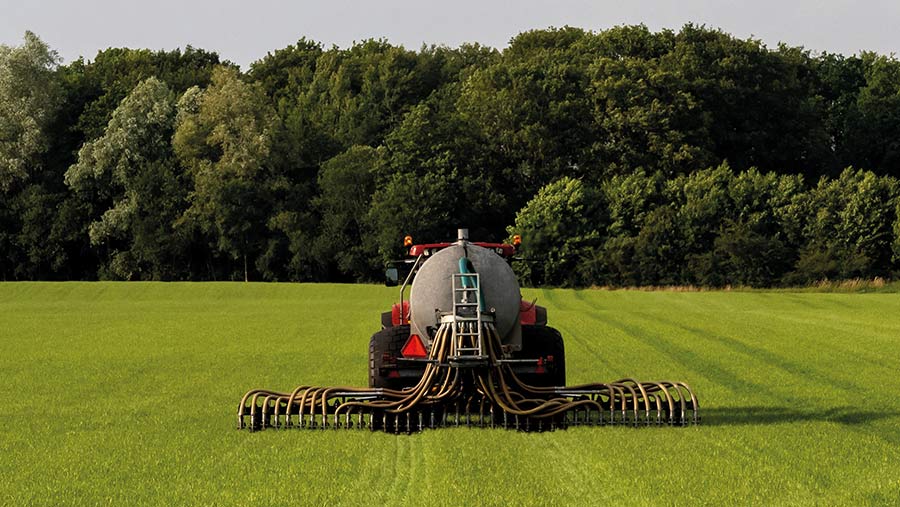 Tighter muck and slurry spreading and storage requirements are now in place across the UK.

We take a look at the rules for each of the nations, what funding is available and other changes coming down the line.

Seven years of lobbying from NFU Cymru ended last month with an “unworkable” blanket NVZ imposed by the Welsh government across the whole of Wales, despite Natural Resources Wales (NRW) suggesting land in the NVZ be increased from 2.3% to just 8% of farmland.

The changes are in three stages:

Welsh farmers still have the Farm Business Grant – a 40% grant for a list of equipment (rainwater harvesting, feeding areas, water run-off from yards and so on) worth £3,000-£12,000 from the Rural Development Programme.

Relief followed the recent Defra announcement that autumn manure spreading has not been banned, says Neil Carter of SAC Consulting.

Farmers were forced into investing in slurry storage relatively early, in 2007, when the entire country essentially became an NVZ, but were given ample financial backing.

Funding was worth 60% support up to £51,000, says Aileen Lawson of Ulster Farmers Union.

Farmers must abide by rules in the Nitrate Action Programme, which is currently in its 2019-22 guise.

Support is available through the Farm Business Improvement Scheme tiers one and two. Both tiers are worth up to 40% of eligible costs.

Most rules on slurry – and silage – are now in one place, with the inclusion of the 2003 Silage Slurry and Agricultural Fuel Oil Scotland regulations into the Water Environment (Controlled Activities) (Scotland) Regulations 2011.

Among the changes are:

There are two main routes to competitive grants: