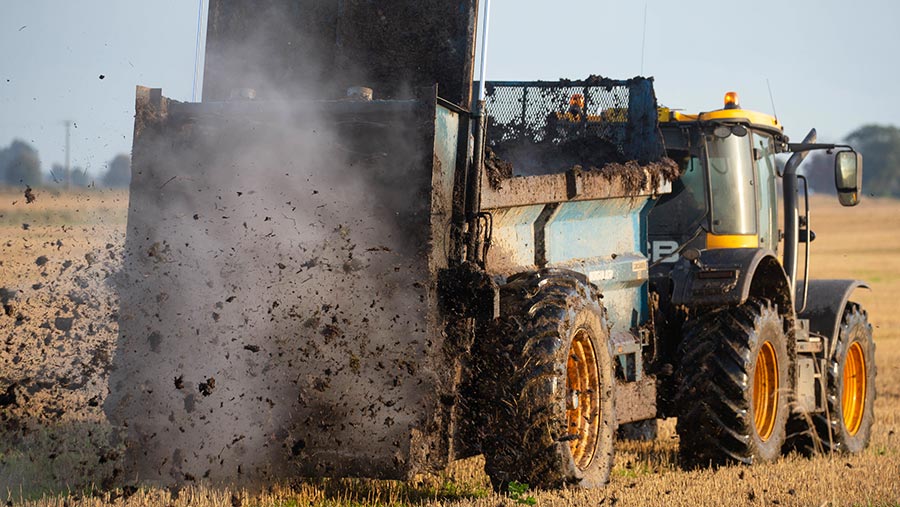 Arable and livestock farmers in England will be able to spread organic manures in the autumn, without the risk of prosecution by the Environment Agency (EA), subject to new conditions from Defra.

The rethink follows a review of the Farming Rules for Water guidance by Defra, in consultation with trade and farming organisations, which has now been passed to the EA to use when assessing if enforcement action is required against farmers.

“The Environment Agency will generally prioritise giving advice and guidance before taking enforcement action,” says Defra, adding that the new guidelines provide clarity to farmers on how they can use slurry and other manures during the autumn and winter.

To avoid enforcement action, farmers spreading organic manures should first be able to demonstrate they have planned their applications, such as having a nutrient management plan.

This should include an assessment of the total crop nutrient requirement – for example, based on the AHDB’s nutrient management guide (RB209), suitable farm software, or advice from a professional  agronomist.

The plan should also take account of the results of soil analysis, and the nutrient content of the organic manures and any manufactured fertilisers applied.

Land managers should consider the soil and crop need for nitrogen, based on an annual crop cycle rather than just its immediate need, and should avoid applying organic manures that raise the Soil Phosphorus Index above certain target levels.

Some exceptions to this phosphorous restriction are allowed, such as in the case of a farm that produces and applies its own organic manure to its own land and cannot reasonably export it.

For example, low Readily Available Nitrogen (RAN) organic manures – with less than 30% nitrogen – should not be subject to restrictions, including on rate of application, if reasonable steps are taken to avoid leaching, so long as the annual soil and crop need are not exceeded.

But even within these dates, high RAN manure may still be spread, so long as it is at a low rate (30cu m/ha), with no repeat applications within 21 days.

The advice to EA inspectors also identifies what they should consider to be “reasonable precautions” for farmers spreading in the autumn and winter, which includes the establishment of a cover crop before 15 October.

If the land is to be kept bare over winter, land managers must have a justification, such as for blackgrass control, and any spread manure must be incorporated into the soil.

The new guidance has been welcomed by farming organisations.

NFU deputy president Tom Bradshaw said: “Today’s announcement provides much-needed clarity for farmers and growers who have had significant concerns for some time about how the Farming Rules for Water regulations are being interpreted.

“This new guidance will enable farm businesses to plan with confidence and, importantly, drive improvements that benefit soil and plant health as well as water quality.”

“Given the current global crisis and rising energy costs, it is critical that farmers are enabled to optimise the efficient utilisation of nutrients from organic materials,” she said.

“While this guidance is addressed to the Environment Agency, it will also provide farmers with the clarity needed to plan their autumn and winter manure applications.”