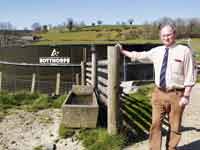 Buying a 1350cu m (300,000gal) slurry store has been money well spent for dairy producer John Davies, after cutting his fertiliser bill by a third.

Previously Mr Davies had been dressing his first-cut silage ground with 125kg/ha N, but since installing the above-ground tank he has cut back to 80kg/ha N.

“We build up the store through the winter and spread the slurry at the end of February,” says Mr Davies, who farms in partnership with his wife, Mair, at Tynlofft, near Lampeter. He also spreads it after the first and second cuts of silage and applies some in the autumn too. The first application is 34cu m/ha with subsequent applications at 11cu m/ha.

An analysis of last year’s slurry showed it had a DM of 6%, 3.4 nitrogen kg/cu m, 1kg of phosphate a cu m and 4.4kg/cu m of potash. “It’s quite powerful stuff,” says Mr Davies. “The land is not short of lime and it is getting all the potash and phosphate it needs from the muck. It means we only have to use 25% nitrogen.” There is also a tank for collecting dirty water which is spread on the fields too.

Mr Davies admits that the financial savings aren’t huge because of the costs associated with spreading slurry, but says it safeguards against future fertiliser price rises and the leys respond well to the combination of inputs. So well in fact that the farm has officially produced the best silage in Britain on more than one occasion.

Good quality silage is an important component in the system at Tynlofft as it accounts for the bulk of the winter feed for the 100-head milking herd.

Mr Davies makes up to 1100t of silage, feeding a combination of first and second cut throughout the winter. He reckons making good silage is largely down to instinct. “If it has been raining for a couple of days and it then eases off to a drizzle that’s the time to cut. We don’t wait until it’s dry; if the grass is damp we just shake it out to dry,” he explains.

Silage-making equipment is shared with his brother, David, who farms nearby and they have had the same team of helpers for the last 20 years. “They come when I lift the phone; that’s where we perhaps gain over other farmers,” says Mr Davies.

He is also quick to protect silage ground. “Two years ago the weather was very bad in July so we brought all the dairy cows in for a month, day and night, and fed them silage. By doing that the fields could be left to grow and we had plenty of silage for the winter,” he recalls. “We don’t have a huge acreage so it is essential that we get as much first cut as possible.”

And that acreage – 40.5ha – is made up of many small fields. Of the 29 fields, the biggest is 2.8ha and the smallest 0.6ha. The fields are block-grazed using an electric fence.

When fields are reseeded, .5kg of clover seed per hectare is mixed with perennial ryegrass seed.

Mr Davies also buys 20ha of standing hay for big square bales to feed to the youngstock. Occasionally he will also make big bale silage if a field of grass gets too strong for the cows.

Winter housing for six months of the year is cubicles where the all-year-round calving herd is fed silage supplemented with concentrates in the parlour. Feed costs account for 5.74p/litre.

The pedigree “Tynlofft” herd of Holstein Friesians has its foundations in the Ormone herd established by Mr Davies’ father, Sam Davies.

The farm is on a cheese contract – the Davies’ sells their milk to Glanbia – so they look for pluses in butterfats and proteins when selecting bulls. Butterfat is currently averaging 4.06% and protein 3.25%. Good teat placement and stature are also important.

The herd is virtually a closed one – only one cow has been bought in in 20 years – and is currently yielding an average of 8000 litres.

The heifers calve between 24 and 30 months. There are several cows in the herd that are in their seventh and even tenth lactation but the majority are first, second and third calvers. “We have had a lot of heifers coming into the herd,” Mr Davies explains. “We haven’t sold any heifers for a few years because we have been increasing the herd size.” But with the sheds now full he plans to sell some of these this year.