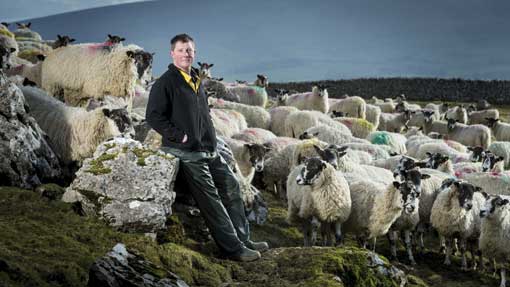 Investing a bit more in Mule flock replacements is paying off for Skipton farmer Angus Dean, with the prices being achieved for prime lambs, high lifetime production as well as strong cull ewe values.

Mr Dean of Toft House, Threshfield, is renowned for buying the very best North of England Mule shearlings as flock replacements each autumn.

And while he paid an average price last year of £190 for 100 head, he’s convinced the premium he earns for his prime lambs easily justifies the investment.

“The North of England Mule is unbeatable as a commercial ewe,” says Mr Dean. “Continental cross ewes do have their supporters, but in my opinion they don’t crop heavily enough with a lambing percentage of 150% compared with well over 200% for the Mule.

“For me it’s the extra output per ewe that makes all the difference in terms of the Mule’s earning capacity.

“I admit some of the three-quarter continental lambs may make £15 more than mine, but the Mule is still more profitable – and she’s such an easy ewe to manage,” adds Mr Dean who farms in partnership with his brother John and mother Dorothy.

As well as 750 North of England Mules the farm runs 250 Swaledales alongside a herd of 170 pedigree Holstein Friesians.

The sheep year starts with teasers being run with the Mules for two weeks before Texel tups are turned out on 15 October for a mid-March lambing.

Ewes aren’t flushed, but are moved to better ground for tupping. Tups stay with the ewes – about one tup per 60 ewes – until a week before scanning in early January. This year the flock produced a 228% scan – the flock’s highest ever.

Ewes are fed sugar beet [pulp?] from late December until late February and then fed according to the scan results during the final weeks of pregnancy at the rate of 0.7kg of concentrate a head.

The Mule flock is housed for six weeks pre-lambing, but ewes and lambs aren’t fed any supplementary feed for the first week after turnout to avoid mis-mothering. Extra feed is offered usually until mid-April.

“We get five crops of lambs off these ewes and have been getting around £70 apiece as culls,” says Mr Deans who regularly tops the cull ewe section at Skipton Auction Mart’s Christmas primestock show.

“We believe by buying the very best North of England Mules we don’t just benefit from what they can earn us as breeding sheep, but also what they can leave us in cull value.

“Our mature Mule ewes weigh 75-85kg and while they are big ewes to maintain it’s that size and capacity to milk and rear lambs that’s their biggest asset – and we’ve still got something good to sell at the end,” says Mr Dean.

All lambs are finished off grass. The first draw is made in July and then every week after that with all lambs sold by November. First draw lambs last year weighed 42kg earning £93 apiece.

“Our 1,500 Texel-sired prime lambs averaged £75 last season. By September and October we’re drawing at 44-45kg, but we definitely want them over 40kg,” says Mr Dean.

“There’s a lot more to the best North of England Mules besides having a pretty face. We want a big sheep with good conformation. A well-marked face is just a bonus, but it’s the power and size of these Mules that we’re looking for.

“When a ewe can produce us 10 lambs in a lifetime and still have a cull value that makes a good contribution towards the cost of her replacement, she doesn’t owe us very much which is why we feel it’s worth paying more to buy the best shearlings”

Selecting the ideal type of tup to bring out the best conformation qualities in prime lambs out of the North of England Mule is important for the Dean family.

“We want a big, long tight-skinned tup with plenty of stretch and a good back-end. We want tups to compliment all the qualities of the Mule.”

Although some Blue-faced Leicester tups are bred at Toft House to use on the 180 Swaledale ewes that are crossed, tups are also bought-in.

And it’s the way Bluefaced Leicester breeders have responded to the commercial needs of their Swaledale buyers that Mr Dean believes has had a big impact in ensuring the popularity of the Mule as a breeding ewe.

“There’s a world of difference between the Bluefaced Leicesters of 20 years ago compared with today. The breed is now a big, powerful carcass sheep and it’s passing those qualities on to the Mule.”

• Size and capacity to milk and rear lambs