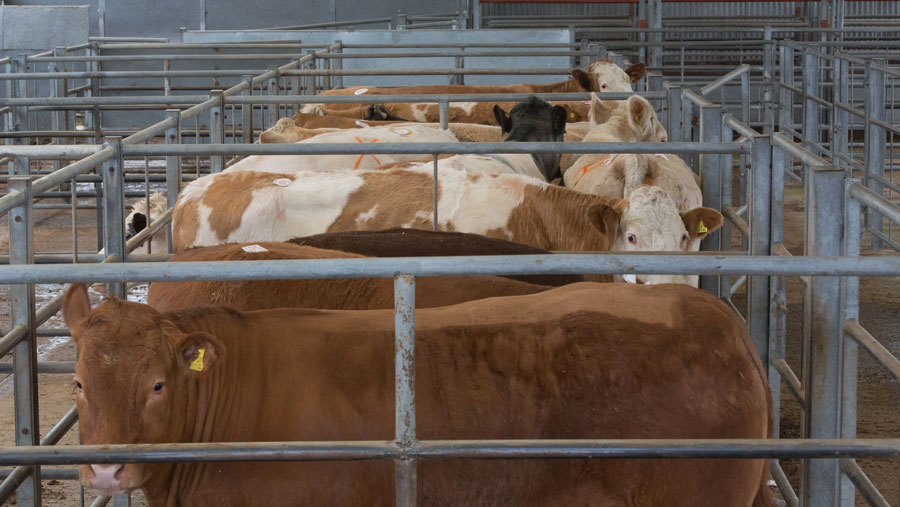 Normally at this time of year, abattoirs drop the price to encourage future bookings, but staff shortages and Covid outbreaks have meant cattle have had to be rolled into the following week.

As a result, some analysts believe the deadweight price is unlikely to increase until October/November.

However, this has done little to deter heady liveweight prices.

Auctioneer Richard Haigh said trade was “remarkable” and “never seen before”. A clear driver, he said, was increased demand from the ringside of butchers, wholesalers, and farm shops, as more people holiday at home and eat out.

“A relatively tight supply of fat cattle is underpinning trade, along with the fact there’s no influx of imports to weaken the price.”

He thought it unlikely prices would be maintained, but added that even if there was a reduction in the coming week, cattle would still be a good trade.

Business at Bridgnorth (Tuesday 24 August) was “fantastic”, according to auctioneer Mark Burgoyne.

Sales were at least as good as the previous week, if not better, with clean cattle up to 292p/kg, and a lot of heifers and steers at 270p-280p/kg. The market hadn’t seen new buyers, but new farmers who would usually sell deadweight were coming in.

A fortnight ago, the average price across the board for heifers and steers was an “unbelievable” 260p/kg, said Mr Burgoyne. This week it had dropped back to 252p-253p/kg, perhaps reflecting slightly more variation in quality, but was still a very good average, he added.

Bulls were up to 260p/kg, a lot dearer than seen previously, to just short of £2,000 a head for a heavy continental weighing more than 838kg.

“I can’t see things altering much, but then the cost of feed is so dear, farmers can’t sell for anything less,” he said.