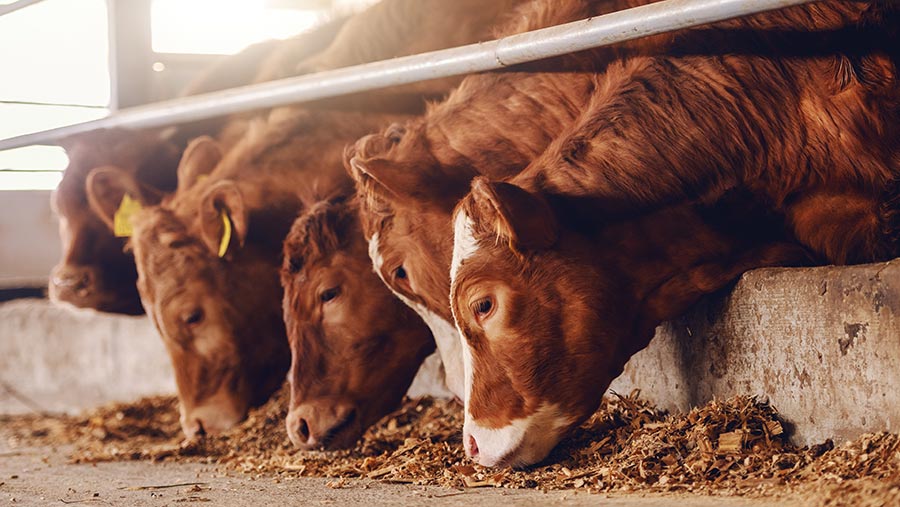 Early sales suggest weaned calf values could surge again this autumn, with deadweight prices running 10% up on the year and supporting buyer confidence.

Finishers remain on the hunt for cattle, with numbers tight across the UK, Ireland and mainland Europe. And strong store prices have put an extra £60-£90 on weaned calves.

Europe’s average August beef price was also up 10% on the year. Irish kill is back 6% and factories have paid above quotes in recent weeks.

See also: Suckled calf prices up 50p/kg on the year as confidence grows

But while the beef price appears to be firm, the supply chain is under stress. Processors are reporting close to 20-30% fewer staff due to Brexit, Covid, or both.

Talk among the trade is that preparations for Christmas have already begun, with processors starting to ensure they can secure clean cattle in time.

Mr Mackenzie said the smallest spring-born weaned calves by Limousin and Charolais bulls were coming to more than £3/kg.

“They are very good, uniform batches of April/May-born calves sired by Limousin or Charolais bulls bought by the government at Stirling and hired by the crofters,” he said.

At current prices, these calves had the potential to grow into 550-600kg stores worth £1,400 a head. But, Mr Mackenzie stressed, these calves were longer-term buys.

“There’s not a huge margin in the older cattle. They don’t eat for nothing and those bought for 100 days to feed can cost £250-£300 a head in feed costs alone.”

Oliver Shearman, auctioneer at Stirling Caledonian Marts, said he had been valuing cattle in the lead up to an upcoming spring-born calf sale next week (4 October).

He stressed it was very hard to make firm predictions, given market volatility. “As soon as you tell folk you think their calves will be dearer than last year, they are happy,” said Mr Shearman.