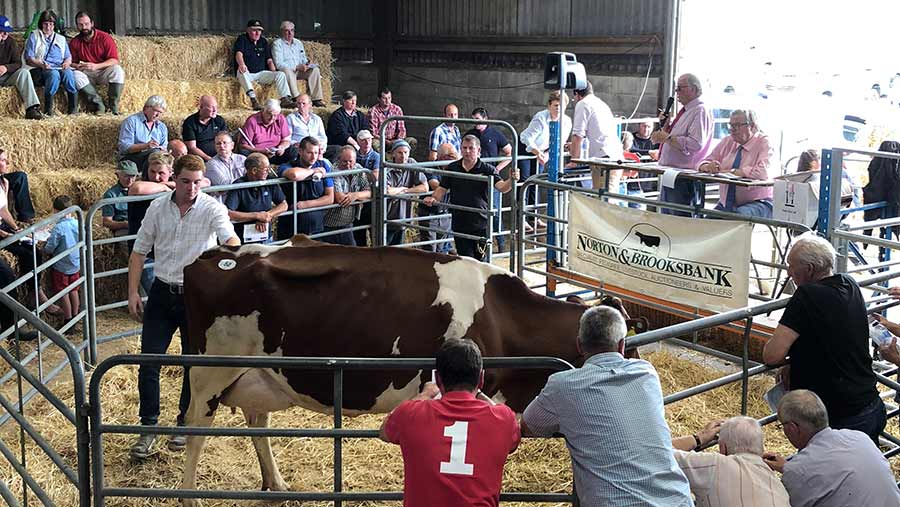 Drought and winter feed worries meant trade was restrained on older cows or cows with faults, but a well-attended on-farm sale saw 10 cows make more than 2,000gns and a top call of 2,700gns at the dispersal of the Kilton herd.

A total of 32 buyers crowded the ring at Carlton Forest Farm, Worksop, Nottinghamshire, for the sale of the Baddiley familiy’s 150-head Holstein herd, which was dispersed so the business could focus on the arable enterprise.

Trade topped at 2,700gns for a Whinchat heifer from the Farrah family, bred by Andrew Birkle. She brought eight generations of Ex cows and sold in calf to Walnutlawn Soloman to Messrs Shepherd of the Meldamar herd, Bakewell.

Next at 2,600gns was a Denmire Mesdoor heifer from the Jacklyn family, bought by Mr Birkle. She was three months calved and was giving 34kg.

Served heifers regularly hit £1,500 and more and 54 recently served heifers and heifer calves at foot topped at 1,100gns for an unregistered heifer served to Jacklyn. Other highlights were a 780gns call for a calf from the Jacklyn family by Hotspot and a 1,000gns bid for a Jacklyn yearling.