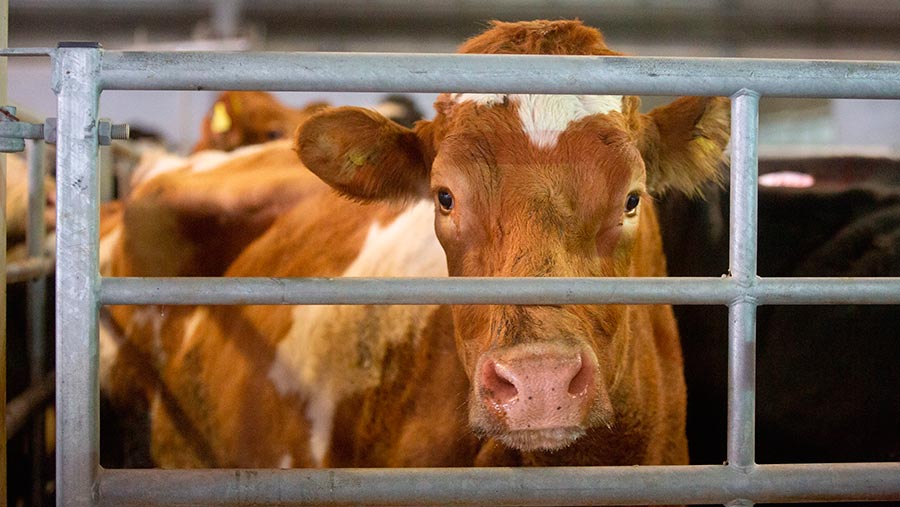 Barren suckler cow prices have stepped up a gear in the new year, giving confidence to beef producers.

Auction marts have reported trade returning to levels 12-20p/kg dearer on the year, after falling flatter around Christmas.

A base price of 265p/kg was reported in Scotland last week (10 January).

“Abattoirs appear to be talking about prime cattle coming a bit better – there is talk of the job improving,” Mr Holliday told Farmers Weekly.

He said dairy cow averages were close to the 100p/kg mark, adding that better-than-average dairy cows were making 105-110p/kg.

A price of 128-135p/kg was being achieved by commercial dairy-cross continental suckler cows leaving suckler herds after eight to 10 calves, he said.

He added that those farms which had held on to cows for a month or two, to target the new year market, were being rewarded. He said about 30% of cows were bought as feeding cows.

Beef cows are 15-20p/kg dearer than in the autumn at Stirling Caledonian Marts, where auctioneer Oliver Shearman requires cows every Thursday to meet demand from keen buyers.

However, Mr Shearman added that dairy barrens had not lifted by as much.

Beef cows were a good trade, with older dairy-cross suckler cows making 125-130p/kg, better-fleshed sucklers at 140-145p/kg and big pure continentals at 160p/kg and above.

He said suckler cow supply had increased as farms had recently weaned calves and pregnancy-checked cows.