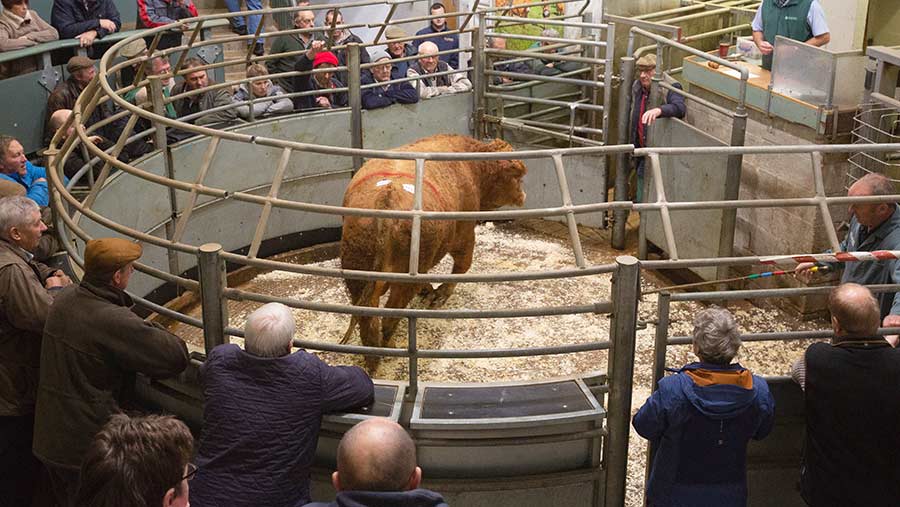 A dire beef trade is plaguing cattle finishers, who have seen deadweight quotations continue to fall through March to leave deadweight prices 22p/kg back on the year.

In the marts, heifers and other butchers’ cattle have kept some value and are still trading close to and even above the 200p/kg mark, but elsewhere steers and bulls are sharply back on the year.

Analysts blame imported beef from Ireland and Poland for filling the chillers, which has led to deadweight values falling 14-15p/kg through February and March, leaving steers at an average of 335p/kg.

Some hope a late Easter and better weather will increase demand, while an early spring will curb supply as cattle return to pasture.

Last week (26 March), 24 steers averaged 184p/kg, 88 heifers averaged 198p/kg and 72 bulls averaged 167pkg. Trade is back 5-10p/kg on the year generally, with best heifers and steers close to last year’s values and second-choice animals more than 15p/kg back on the year.

“The impact of the deadweight price cuts has been felt, but not until the past three weeks,” said auctioneer Mark Burgoyne, partner at Nock Deighton.

“I think this year is a watershed. I can think of quite a few people who aren’t going to sell cattle anymore.”

He said anything yielding a carcass heavier than 400kg was difficult to sell, adding that 600-650kg steers were wanted by all bidders, but 750-800kg steers were tricky to place.

Good-quality cattle remain well sold, but dairy-cross, native-bred or second-choice cattle are back 8-10p/kg on the year, said James Sealy, auctioneer at Newark.

Mr Sealy said Brexit uncertainty meant nobody trading cattle had much idea where trading conditions were heading. Throughputs had stayed constant, with 140-150 clean cattle and 80-100 bulls most weeks.

“With us being a red market, it might actually make sense for farms who are selling underfinished cattle to TB-test them and sell them as stores,” said Mr Sealy.