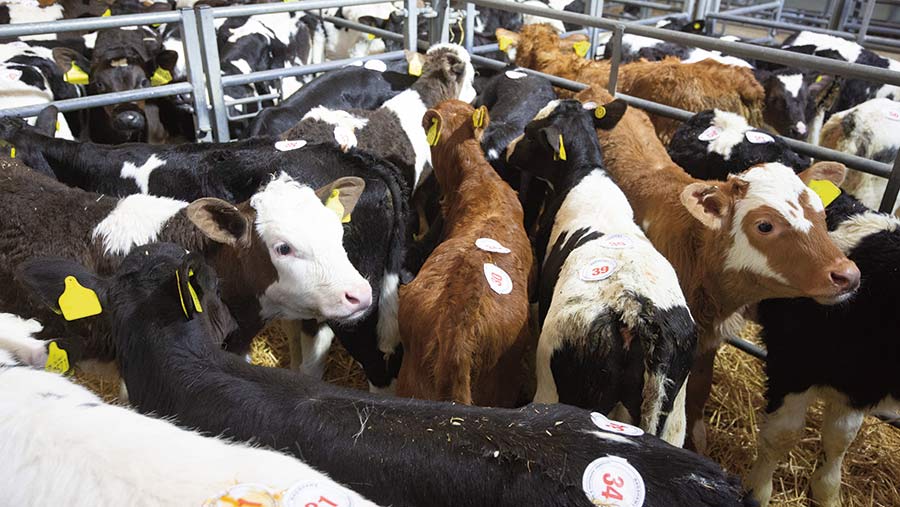 Continued unprofitable prime beef values have eroded calf prices at auction marts this summer, with calf trade 15-25% back on the year.

National AHDB data suggests dairy farms are taking £50 less for continental-cross calves at three weeks than this time last year, with bulls at £206 and heifers at £159.

Great British average steer prices of 327p/kg in July have sparked the National Beef Association (NBA) to call for more promotions, market competition and fairer prices, while demanding co-mingling of beef and imports be curbed.

Calves are still in demand at Leyburn, where market manager and auctioneer Stephen Walker and the team typically see 80-160 calves at their Friday sales.

He said the value of calves is up to 25% back on the year at times, but that good, strong, well-framed calves were very good to sell 99% of the time.

Leyburn’s entries are generally made up of calves at six-to-10 weeks, with a high proportion of Blue-cross calves and fewer dairy bulls, with sexed semen becoming more commonplace, said Mr Walker.

“Trade is certainly not as good as it was,” Mr Walker told Farmers Weekly. “Farmers are talking about the beef price all the time and are understandably disappointed.

“However, feed costs look to be a bit cheaper this time which could help the margin.”

Supply is not helping trade, according to Kivells auctioneer Mark Davis, who says more flying herds and sexed semen, while a progressive step for many units, have increased dairy-cross beef calf supply.

“Trade is extremely volatile,” he told Farmers Weekly. “No two weeks have been the same.”

He said last week’s trade (26 July) was the most selective he’d yet seen.