An estimated 1,000 people attended this year’s Dairy Expo, compared with the usual 5,000, in what could be one of the few livestock shows to take place this year. Many summer shows could be cancelled because of the coronavirus crisis.

But it failed to deter cattle exhibitors, with more than 280 cattle entered into the two-day show and judges coming from as far as Quebec, Canada, and Indiana in the US.

Taking the interbreed title, as well as the Holstein breed title, and living up to her name was Wiltor Silver Centrepiece from Nick and Louisa Sercombe, Leicestershire.

She was bred by David Jones of the Wiltor herd, Monmouthshire, after being imported as an embryo from the US for £2,000. She descends from one of the most famous cow families, Larcrest Cosmopolitan. 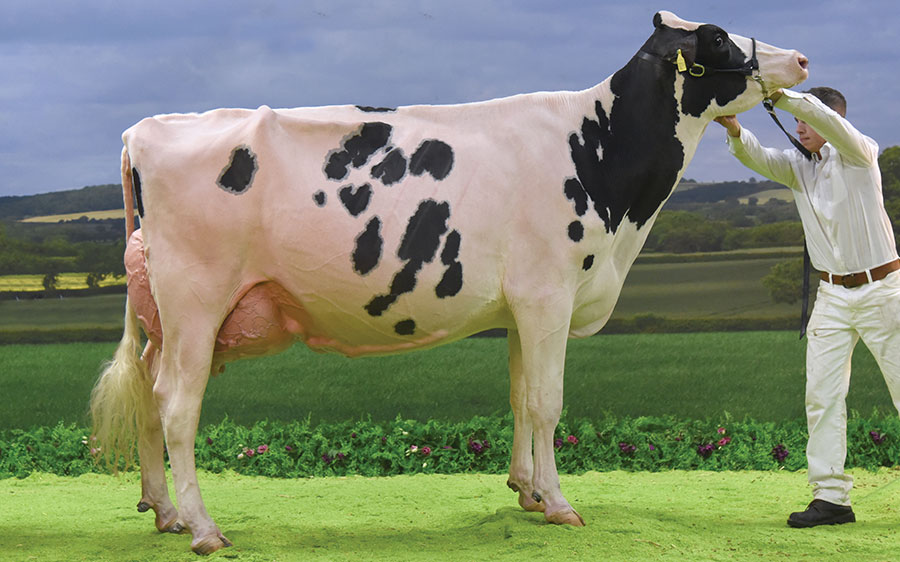 She caught the eye of the Sercombes when they bought her in April last year at the Wiltor sale for the day’s top price of 43,000gns.

She is classified as Ex93 – the maximum score for a third calver. She calved with her third in January and is currently giving 50 litres/day.

Centrepiece is no stranger to the showing scene, as she scooped the reserve title in her senior class at UK Dairy Day last year, as well as being nominated for the All Britain Junior Cow honour.

Taking the reserve title was Icow Huddlesford Rosann 899 from the Huddlesford herd of Tom and Andy Cope, and Isaac and Claire Lancaster.

Rosann was imported from Germany as an in-milk heifer four to five years ago, and has won a string of awards since, including Agriscot in 2018 and reserve champion at UK Dairy Day in 2018.

She is classified Ex95 and after calving in February 2019 with her fourth calf, she is still giving 50 litres/day. She has already yielded 15,800 litres in 305 days and is one of the herd’s top yielders. 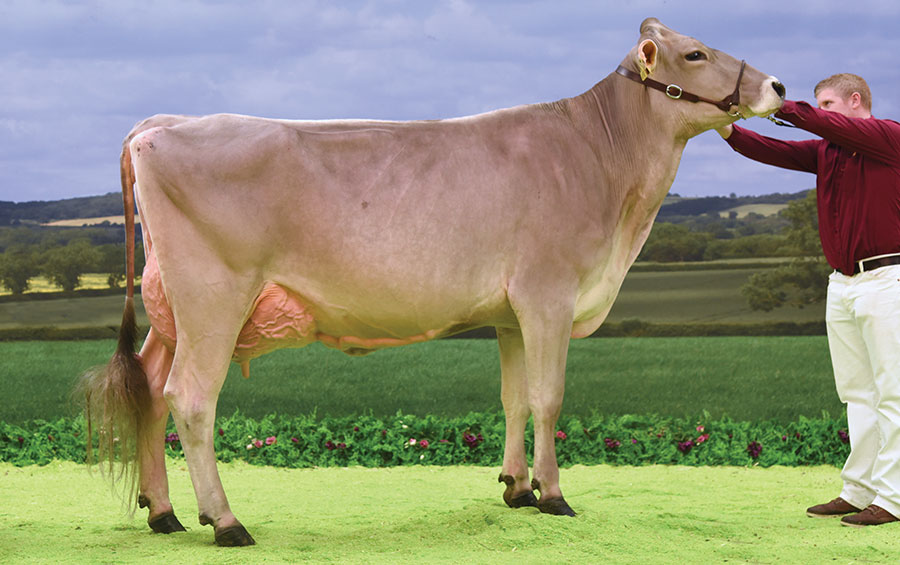 By Scherma Glenn Blooming and out of Kedar Calvin Sanchia Maria, she is giving 42 litres at 5.06% butterfat and 3.6% protein.

Mr Lochhead and Jessica Miller, Dumfries, went on to scoop the reserve title with Kedar Virestar Jodie. This is the first showing for the two-year-old, which is giving 28 litres/day at 4.86% butterfat and 3.46% protein, after calving in January.

This home-bred heifer won reserve champion at UK Dairy Expo as a calf.

It was a double victory for Rob Kite of the Cotonhall herd, Staffordshire, who scooped the overall and reserve breed championship. His 27-month-old Cotonhall Tuck Clarissa took the top prize. 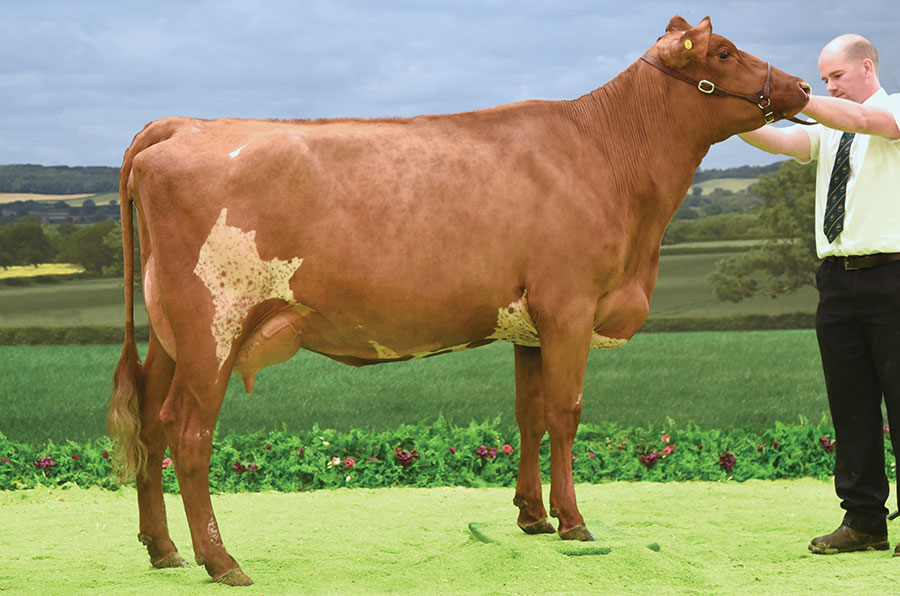 This six-week fresh calver is the granddaughter of the family’s first ever show cow and is yielding 32 litres/day at 4.5% butterfat and 3.6% protein.

She is no stranger to the show scene, having won the Dairy Shorthorn championship as a calf at the UK Dairy Expo.

In reserve was their fifth calver, Cotonhall Pingerley Sonnschein. She calved six weeks ago and is giving 45 litres/day at 4.21% butterfat and 3.35% protein. She won the interbreed dairy champion title at the Leek Show last year.

Heading across the Irish Sea to claim the Jersey breed championship was the Fleming family from County Down, Northern Ireland, with Potterswalls Impression Lady.

This two-year-old calved in November and is giving 32 litres/day with a butterfat of 5.5% and protein of 3.8%. She is a home-bred heifer out of Potterswalls Valentino Lady. 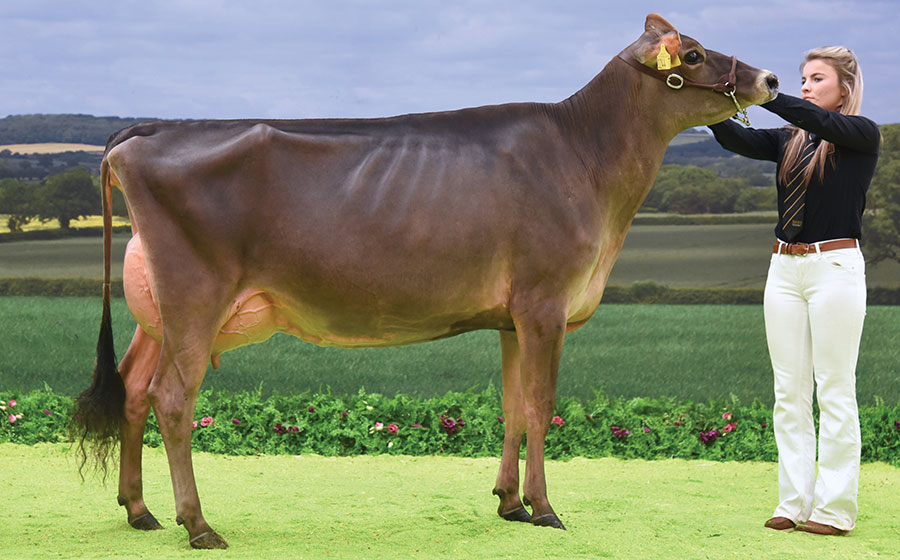 In reserve was Windyridge Tequila Diamond from P Manning and Emma Murray, Shrewsbury.

A 25-month-old home-bred heifer took the Red-and-White title for the Jones family of the Wiltor herd, Monmouthshire, with Wiltor Awesome Rosie Red. This heifer is out of the Red-and-White cow Wiltor Chipper Rosie, which is unbeaten in the ring.

Rosie Red is yielding 34 litres/day and is one of just 14 cows the Jones family are now milking on their farm.

Taking the reserve title was Drointon JBF Promis Red from Andrew Mackellor, Stafford. This six-year-old was Red-and-White champion at Agriscot three years ago.

It was a repeat performance in the British Friesian showring, with the same champion and reserve as 2019.

This is the third time senior cow Oakalby Quadrant Cathy 50 has scooped the British Friesian championship for Ed Burroughs and Son, of the Oakalby herd, Suffolk, at UK Dairy Expo. 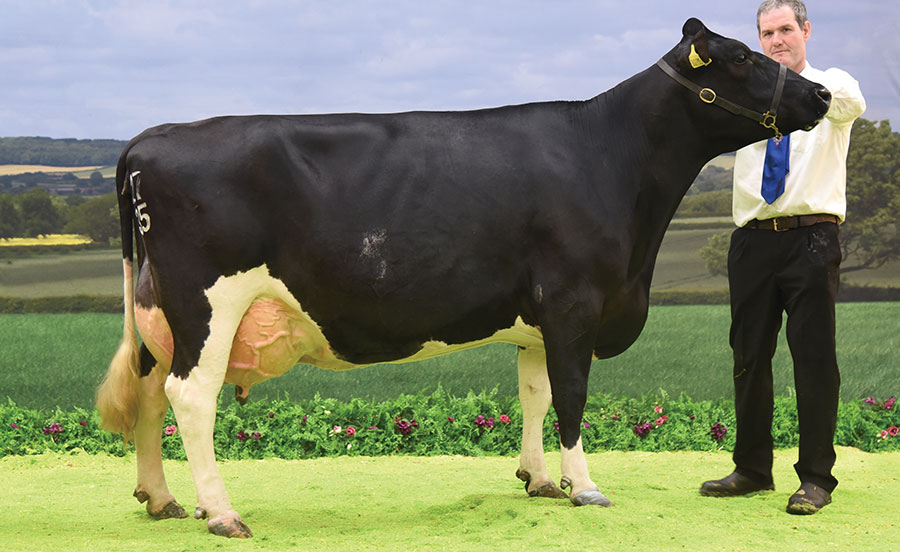 This fourth-lactation cow is yielding 28 litres/day at 4.2% butterfat and 3.2% protein. She is one of 400 British Friesians cows being milked on the family farm.

In reserve was the home-bred, three-year-old Adams Laura 6 from Adam Lawson, North Cassingray, Fife. Laura is by Adams Laura and is yielding 44 litres/day with a butterfat of 4% and protein of 3.2%.

The Tomlinson family reigned supreme in the Ayrshire classes, taking both the champion and reserve breed title. Leading the way was the Ex92-classified freshly calved Sandyford Prime Heather Honey.

She was breed champion at Dairy Expo last year and is owned in a half share with student Beth Graville. This is the first time out for Honey this year. 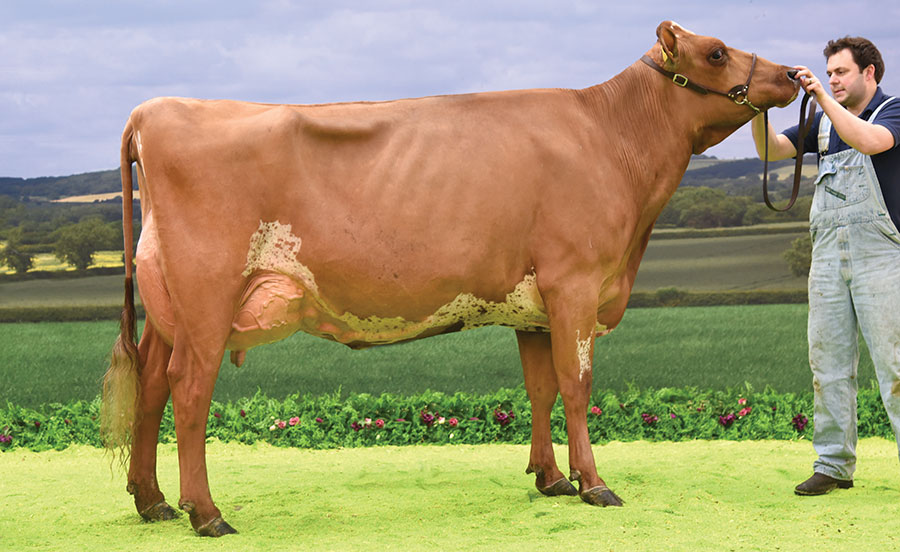 In reserve was Allstar Provider Honey, which is owned by Evie Wilson. Honey is a four-year-old and is no stranger to the showing scene, having scooped Ayrshire championship at Agriscot and interbreed heifer in 2018.