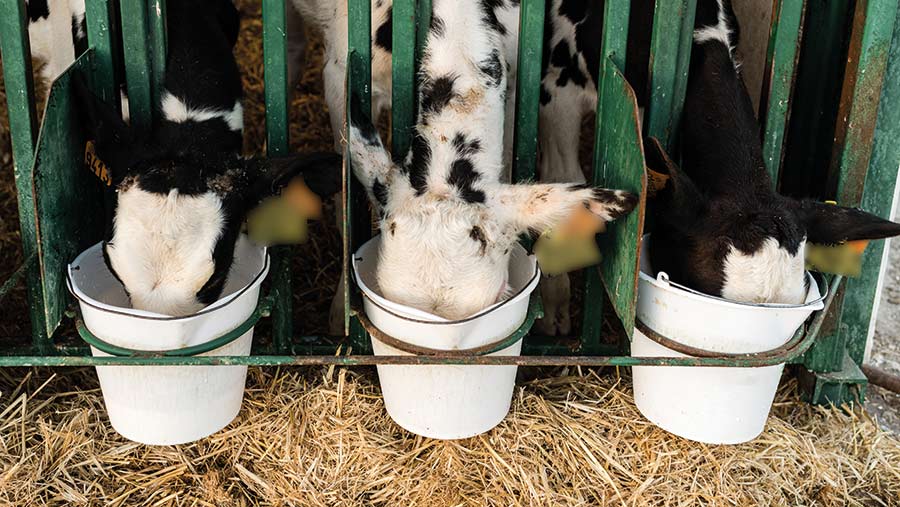 Diminishing grass availability and eye-watering milk powder, feed and utility costs have continued to limit confidence in the calf rings this summer.

Continental bull calves are back 18.8% on the year, with dairy bulls back further (see table).

This is despite trade improving in other sectors. Milking cattle values have lifted 20-30% since March by farmgate milk price increases, while deadweight beef prices remain 40p/kg up on the year.

But the handbrake has been left on for younger cattle prices. Stores have been largely unchanged on the year, with some grass cattle discounted, and calves have made less money too.

However, the 2021 calf trade was notably strong, and many say trade is more reflective of prices two years ago. Average price for 48 Angus cross heifers calves at at Market Drayton last week (20 July) was £84 apiece. Top price was £160.

Milk powder prices at £2,000/t for whey-based and imported products, and in excess of £3,000/t for UK and skimmed milk blends, have been blamed.

Production conditions have also been challenging. Buyers have been kept away from markets by hay, silage and combining work, while heat stress and lower stocking rates have been on the minds of calf-rearers.

Older calves have had demand limited at times due to grass shortages in some southern and eastern areas.

Hot and humid conditions have required more fresh bedding than normal, as farmers have worked hard to minimise disease risk.

One farm’s costs had hit £3 a head a day to rear a calf to about yearling age, said auctioneer Oliver Chapman.

“Not many dairy-bred stores make £1,000 at 12 months old,” said Mr Chapman, who sells at Louth and Melton Mowbray markets.

“That cost was for everything, so if you are costing time and water you are doing well to break even. To do calves well they must be well fed. In some respects, calf trade has held up well considering the cost of production.”

He said some vendors had sold calves younger, while others had stuck to their guns, hoping the quality of the older calf pays off, which it might across 200 calves.

Supplies of calves had been seasonally tight, at about 90-100 a week. The autumn block would peak numbers at about 150 a week, he added.

“People find milk powder is dearer than milk, but to cut it out and use whole milk is a bit of a Catch-22. There might be difficulties in transitioning them to calf milk replacer at the next farm. Vendors tend to think about the next stage and getting them geared up and ready for it.”

One factor limiting value is age, meaning the national averages might be for calves sold a week younger, and therefore not the same goods as last year.

This is according to Mark Burgoyne of Nock Deighton Agricultural, who has been selling calves at Carmarthen since the firm acquired the site in March this year.

“You can’t blame people for not wanting to put weeks and weeks of milk powder into calves,” said Mr Burgoyne. “And other things have gone up in price, like milkers and milk, so calves aren’t perhaps the priority they were.”

He added that vendors were needing more money on their calves to cover the full cost of rearing them, and even the best calves were no dearer than two years ago.

“Getting £350-£400 for three-week-old calves means people aren’t skimping on them, but those are the very best continentals.

“The better end of the calves continue to sell quite well, but we are seeing a lot of second-quality type cattle. Calves from New Zealand-type herds with Jersey in them can go as processing calves.”

He said a beefy type of animal was still commanding a premium, with Friesians often two or three times the value of their Holstein counterparts, with the best at £120-£150 a head.

Older weaned calves have been good value for those with grass and forage to grow them, said Mr Chapman.

“The higher end of the weanlings haven’t seen much of a return for vendors at times. And that middle sort of age of four months or so is difficult. They are too young for one buyer and too old for another.”

Buyers seemed to be keener for eight- or nine-month-old cattle, he added.